I know.. We get it, Talei. You live in Astoria and you love Greek food. Majority of your posts are about your favorite Greek spots like Aliada, MP Taverna, and even the new Akrotiri.

But, I really can’t help it. Not only is it easily available near me, but it’s damn fucking good. I probably only recommend Greek restaurants when people out of town come to visit. Which is why when my parents were in NYC this past summer, I took them here, to Bahari. This little gem is hidden between a tobacco store and a taco shop right off the Broadway train station, but a real Astorian classic at least in my book. 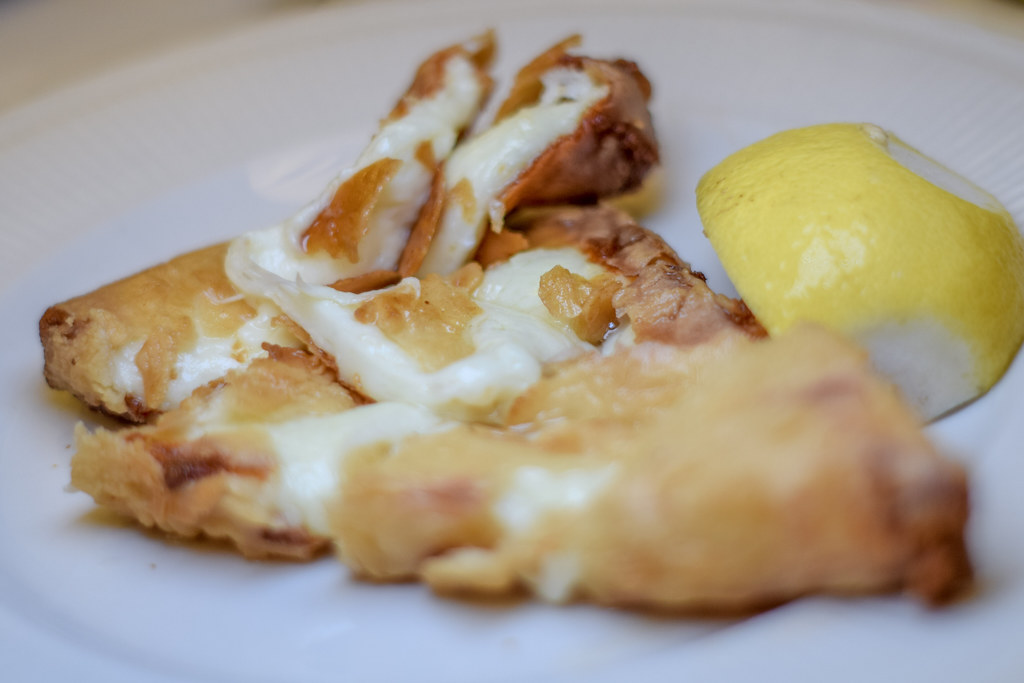 Second to grilled octopus, my most ordered dish at a Greek spot is Saganaki. Lightly coated then pan-fried Kefalograviera cheese with a few squirts of lemon – for whatever reason it just works every time. The cheese’s melting capabilities have a range from gooey stringy #cheeseporn to that of almost tender meat. Keep your frozen mozzarella sticks to yourself, kids. 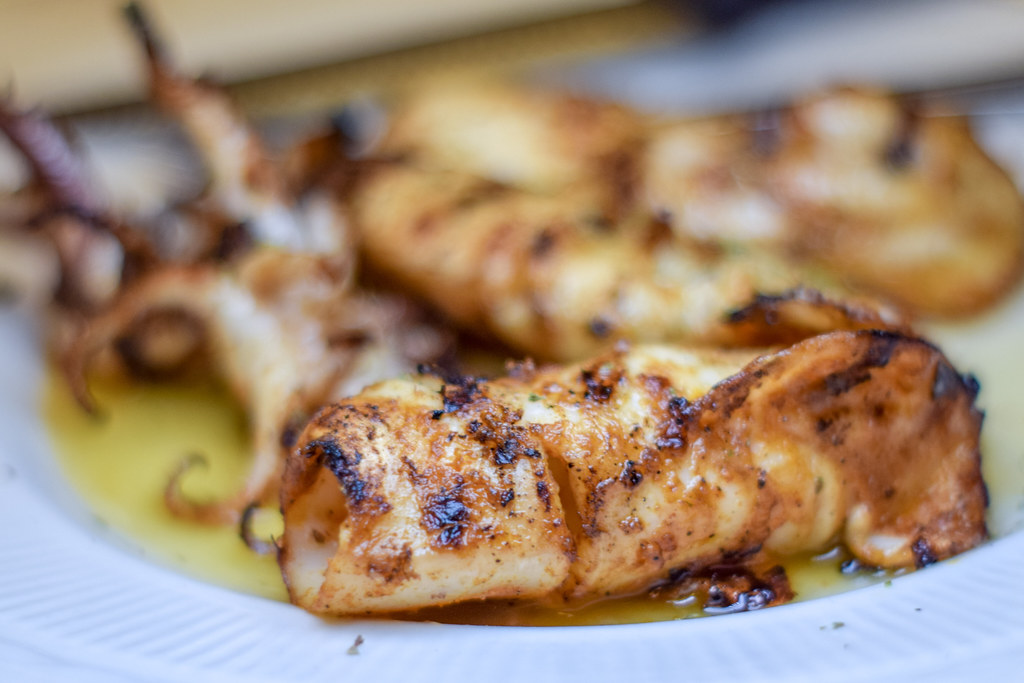 Next up was the Kalamarakia Scharas – grilled, marinated squid. The char was nice and the squid was tender, but it’ll never hold a fire next to my absolutely favorite dish (in perhaps the world)… 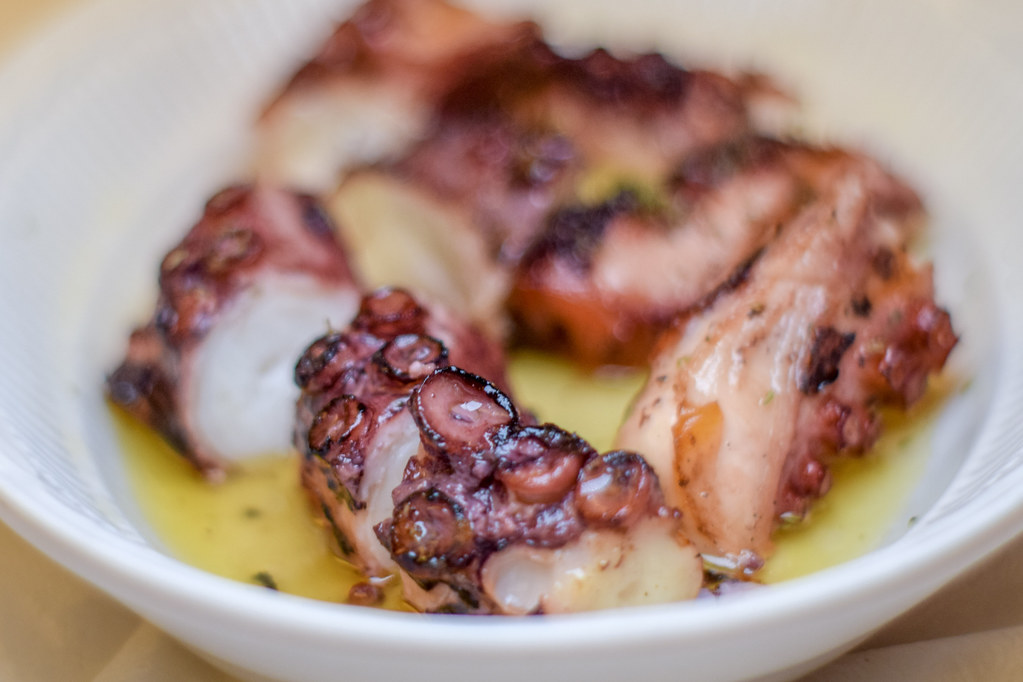 Octo-freaking-pus. The Oktapodi Scharas, or grilled octopus, was (as usual) unbelievably delicious. Besides the obvious meatiness and flavor from the tentacles themselves, the mix of extra virgin olive oil, vinegar, and the brininess of the sea is just lovely. I don’t even feel disappointed when all the octopus is gone, because I know then I can sop up the leftover sauce with some crusty bread. 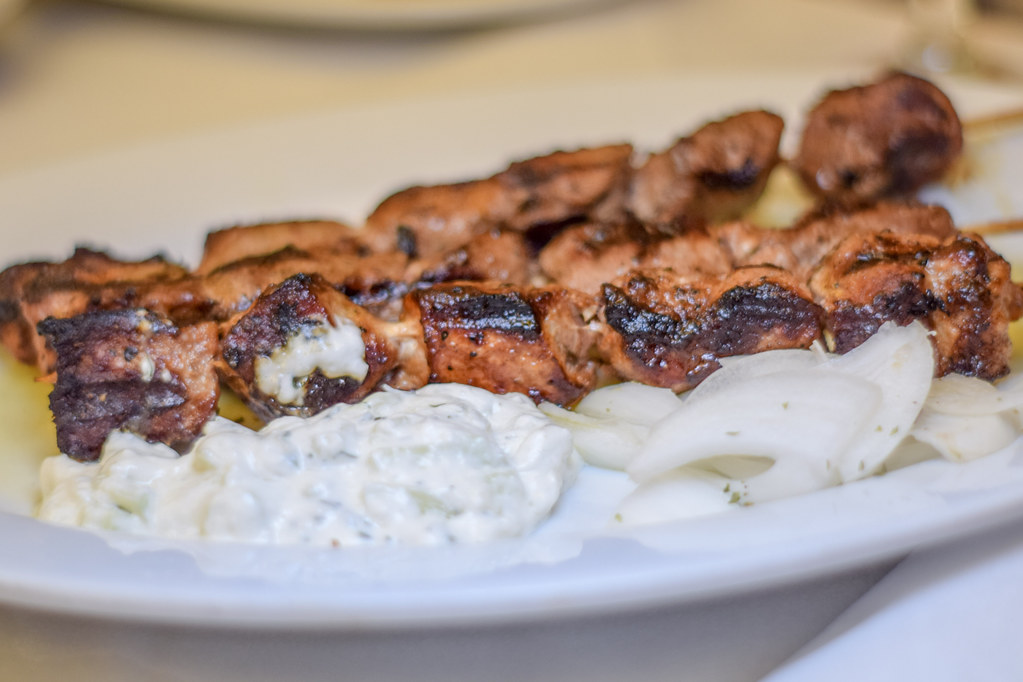 Not much a kebabs guy, but I’ll still dabble. These marinated pork cubes on a skewer, Souvlaki Hirino, were pretty damn good though. Tzatziki and raw onions were nice touch. 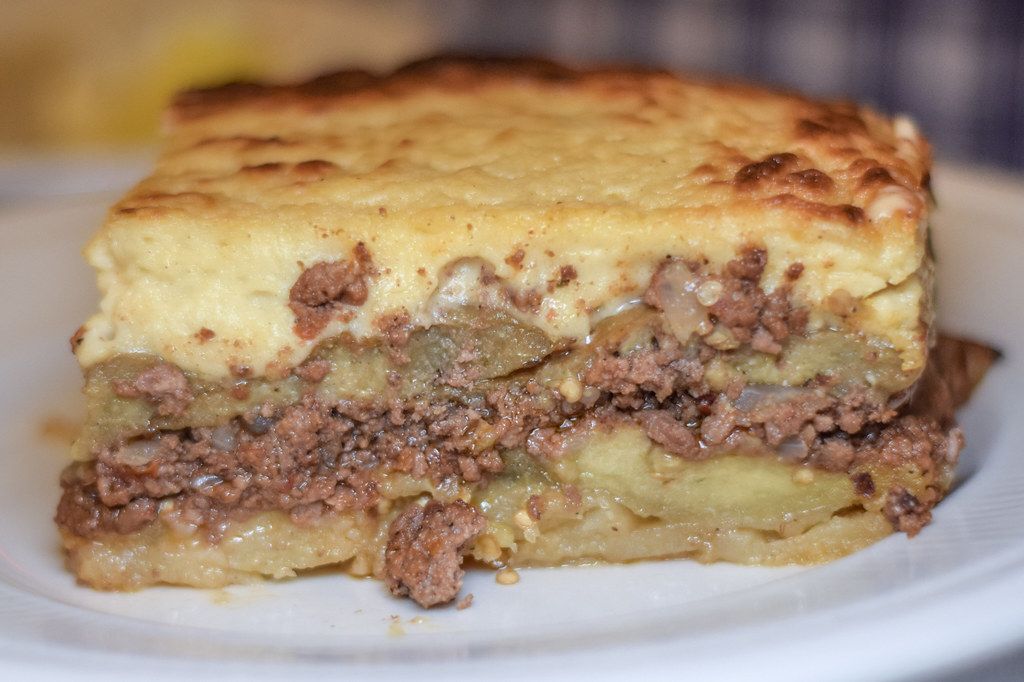 Ah, my beloved Mousakas. It looks like a small piece of an odd stuffed lasagna, but this essentially casserole dish is very filling. It has layers of eggplant, potatoes, ground beef, and topped with a thick fluffy layer of bechamel sauce. Once baked, the top of the sauce forms a slight crust and I’m sure it’s a sight to see when pulling out that first slice from the pan. 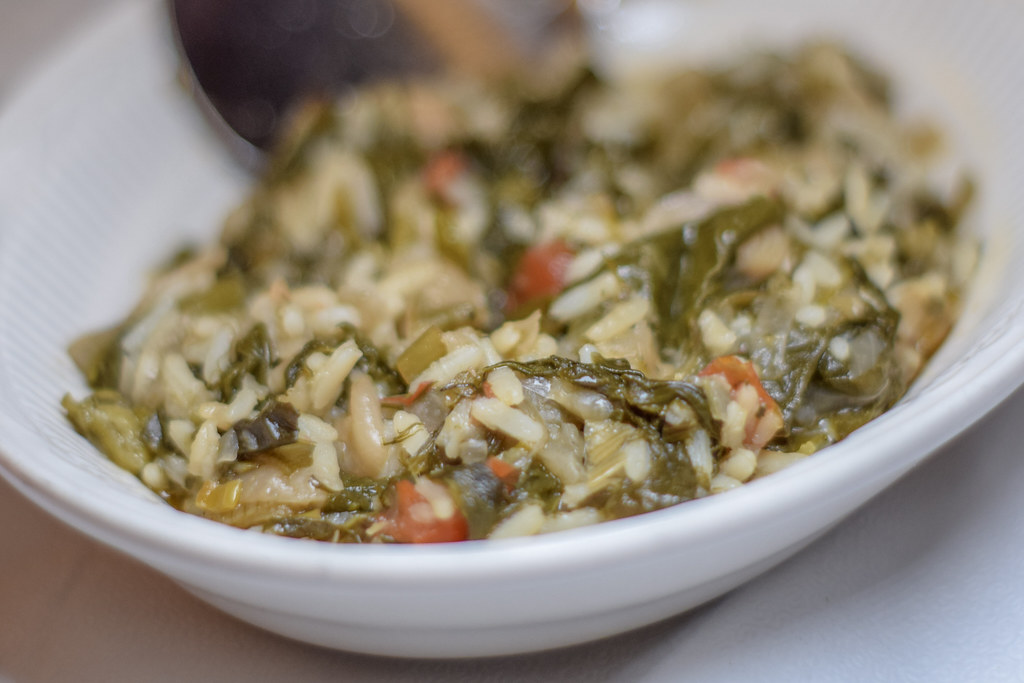 For an entree dish like Mousakas, Bahari lets you choose one side. We got the rice, which was nicely fluffy and mixed with some sauteed greens and seasoning. 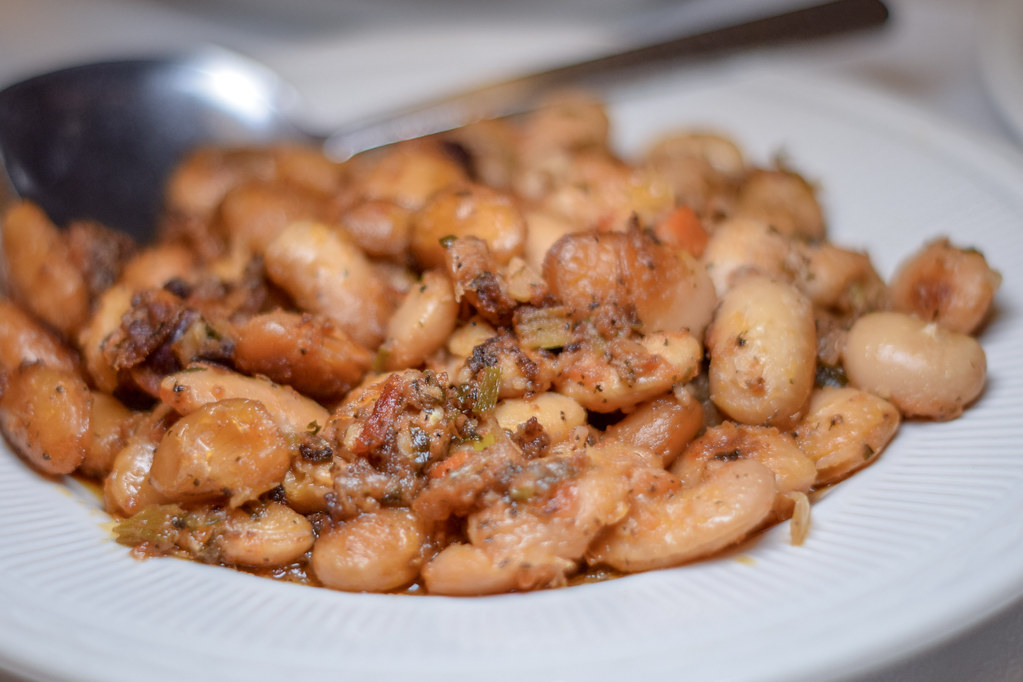 Can’t forget the Gigantes – the large lima beans. Although I did prefer MP Taverna’s Gigantes (probably because they were paired with mussels), these had a lot more flavor than met the eye. Simmered with onions, tomatoes, peppers, and parsley, these large beans packed a punch. 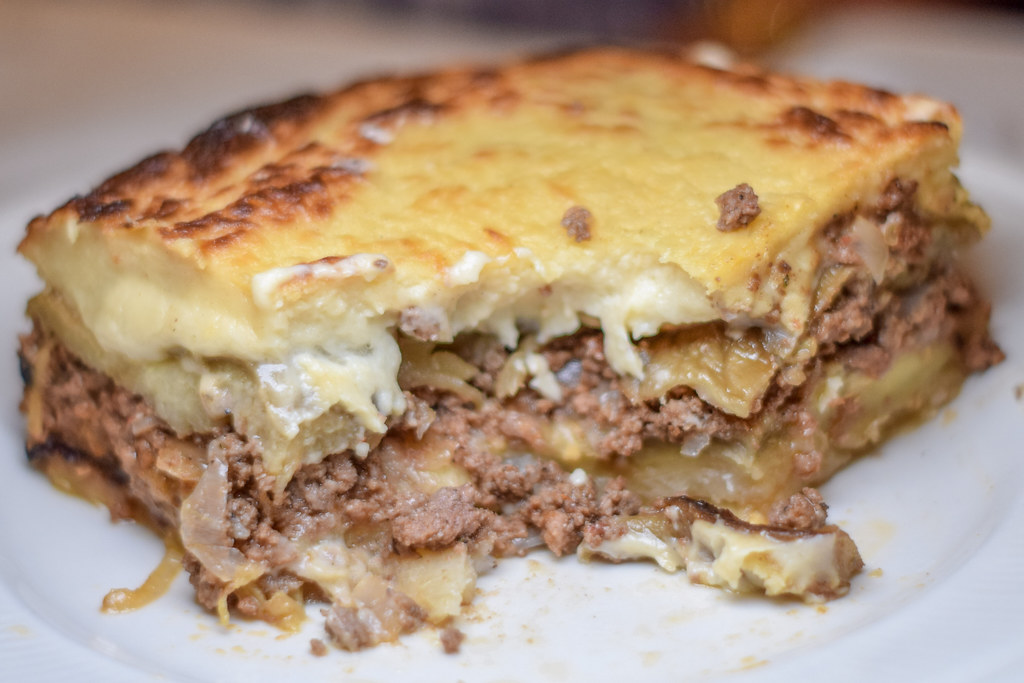 Food here is of course phenomenal, but I have to say the decor and atmosphere is what really ties the place together. When you walk by the small entrance on Broadway, all you see are cooks over a hot grill and some raw meat in casings hanging in the doorway fridge. You’d never imagine that walking inside, the space is immensely bigger than imagined and also just so… Greek. White walls, fake vines over ceiling trellises, and absolutely authentic pushy (in the nicest way possible) Greek staff. I mean that wholeheartedly and I continuously rely on them for their proud suggestions of food that I cannot pronounce. Always be authentic, Bahari, and we’ll keep coming back.