Congratulations to Executive Chef Nicholas Poulmentis of Akrotiri for winning the grand prize recently on Food Network’s Chopped!! Not surprising at all, considering how incredible the food was when we visited not too long ago. 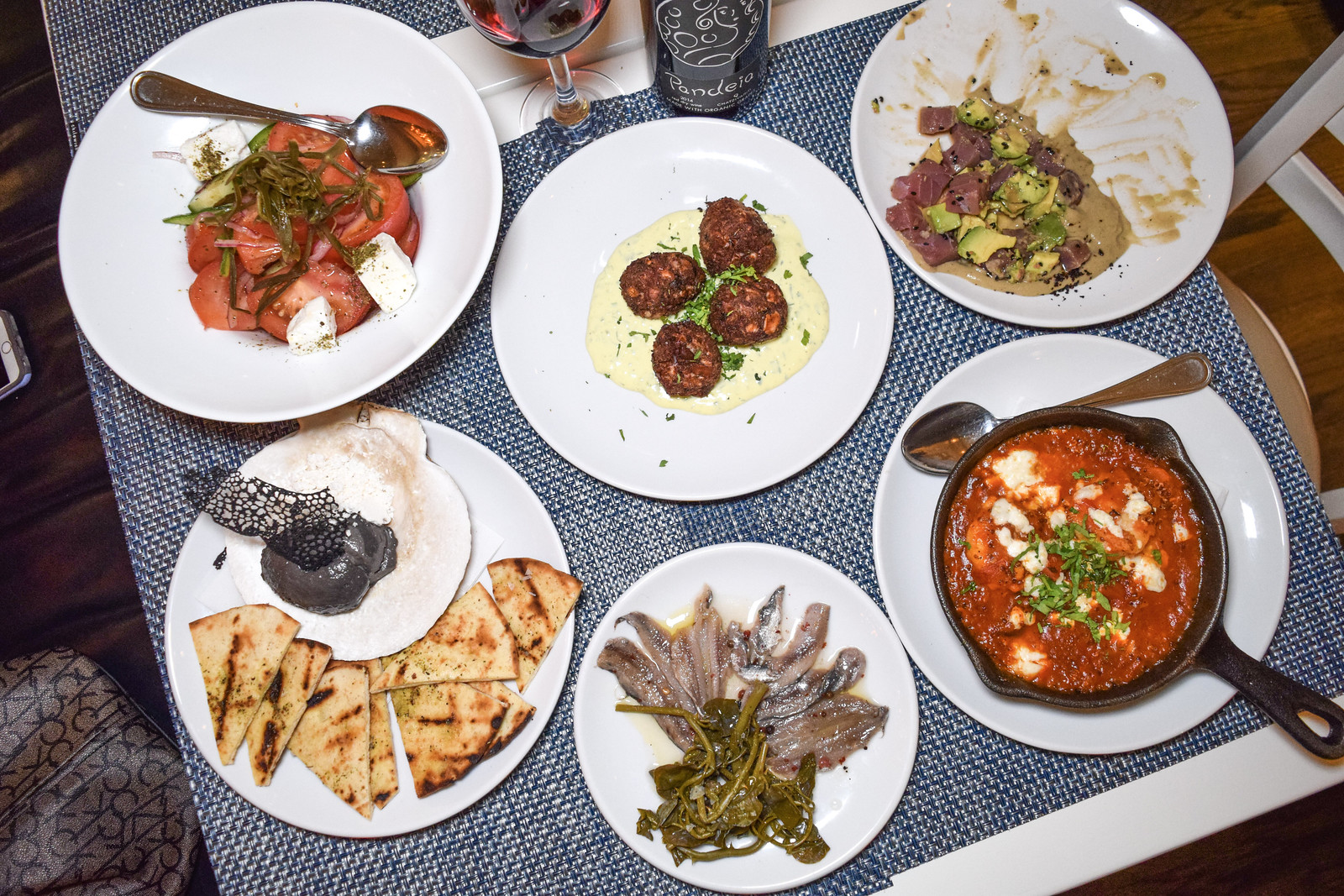 The restaurant opened up early 2018, with a new take on classic Greek cuisine. Poulmentis lived in Greece most of his life, and took his knowledge of the local food and parlayed it into a more vibrant, newer version. The location is not far from the main strip of restaurants that is 30th Ave, but you can definitely tell they’re two worlds apart. Slightly on the pricier side and more refined, it’s a refreshing change from the local apathetic Greek restaurants nearby. 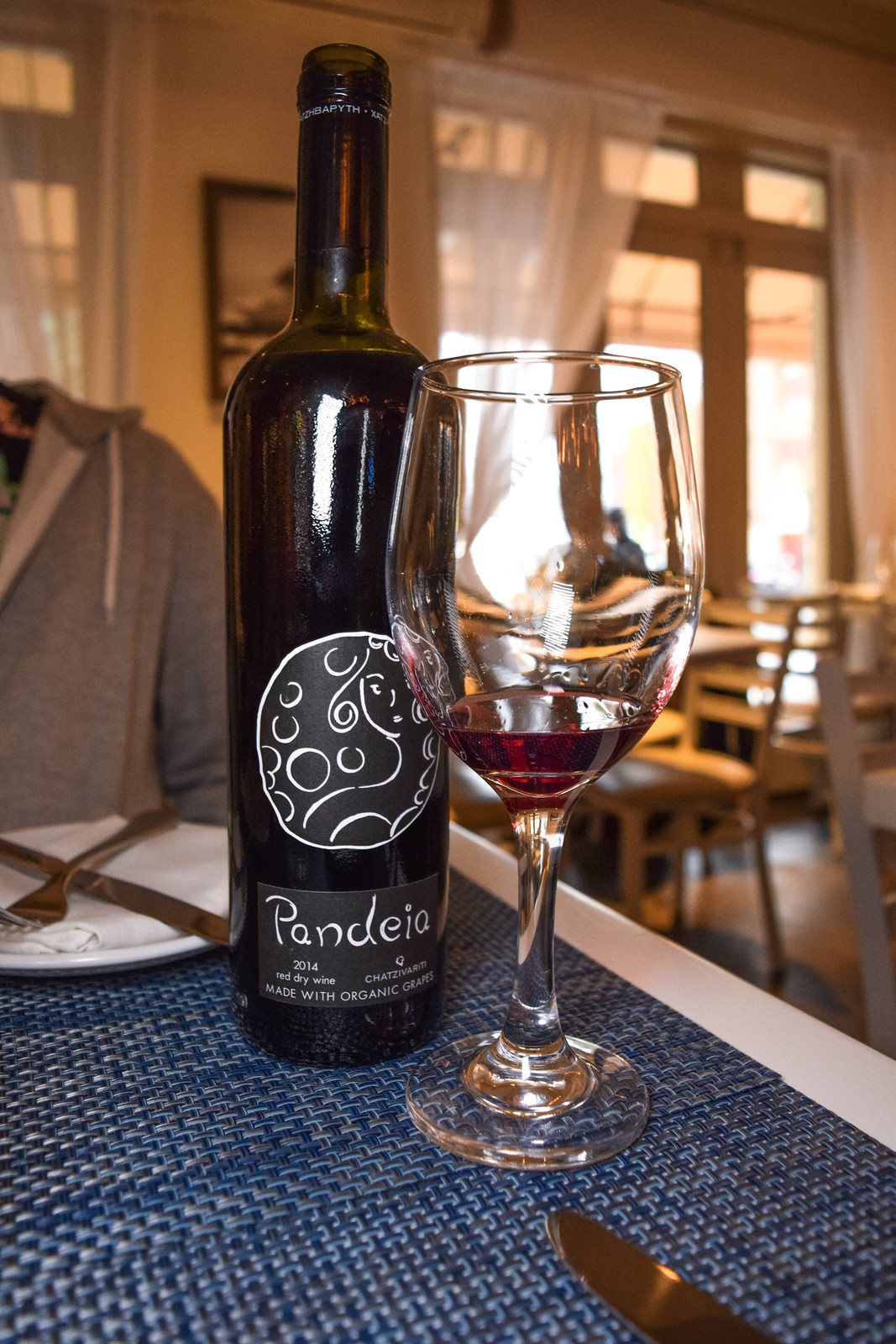 Our server, Panos (who also was the manager) was extremely knowledged in the menu and ingredients, even with the restaurant being opened just a few months prior. He suggested this lovely Greek dry red wine – Pandeia to start our meal. While waiting for our food, I couldn’t help but look around at the thoughtful decor and atmosphere of the restaurant. The bright windows were slightly draped with sheer white curtains, and the Edison light bulbs along the bar area gave it a contemporary feel. 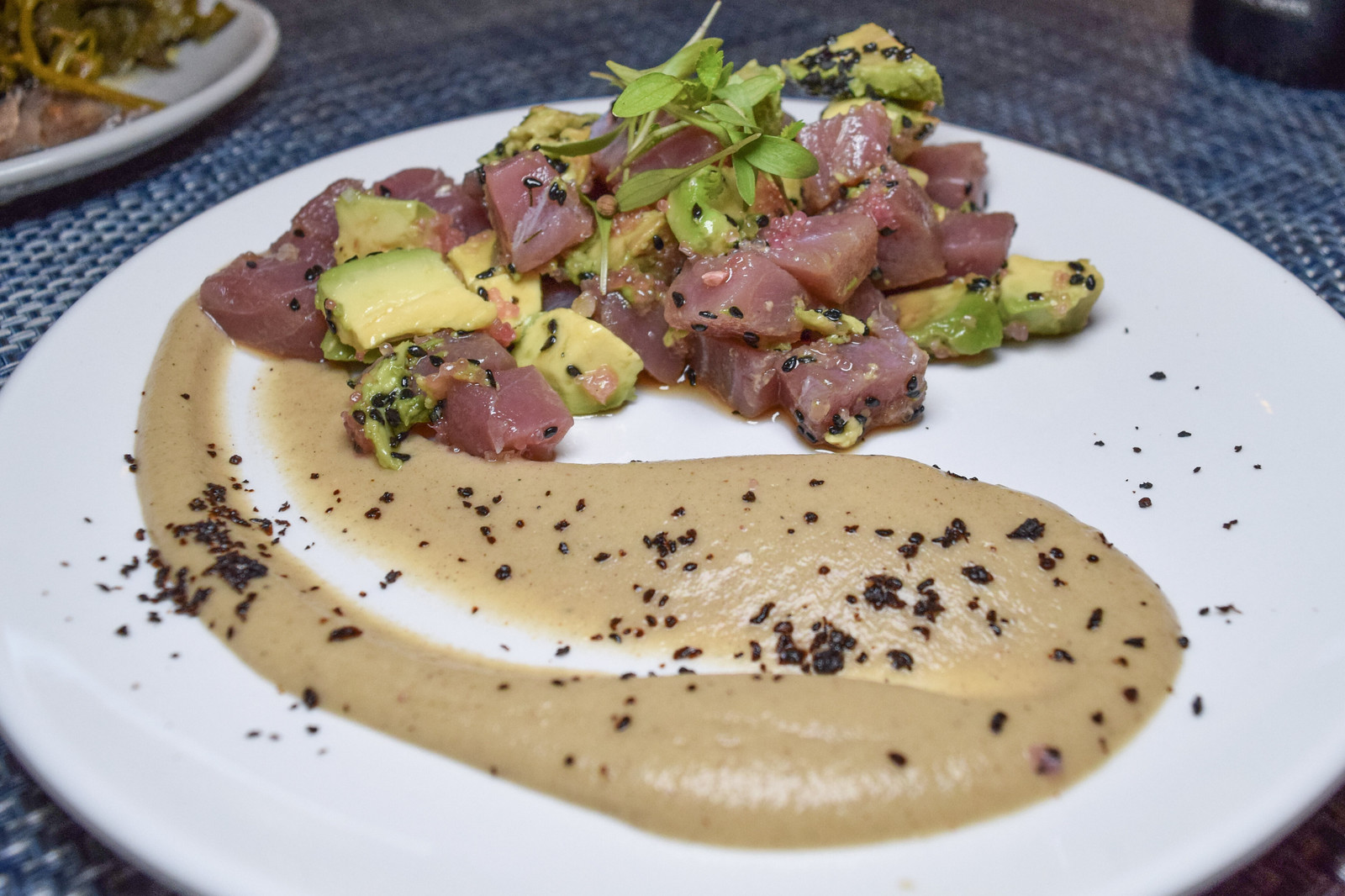 Typically I don’t order fresh tuna from a Greek restaurant, but since Panos highly suggested it, I obliged. The sashimi quality tuna was diced with avocados in a lime sauce, and encompassed by an eggplant puree. I never would have imagined these flavors together, but they really worked well. 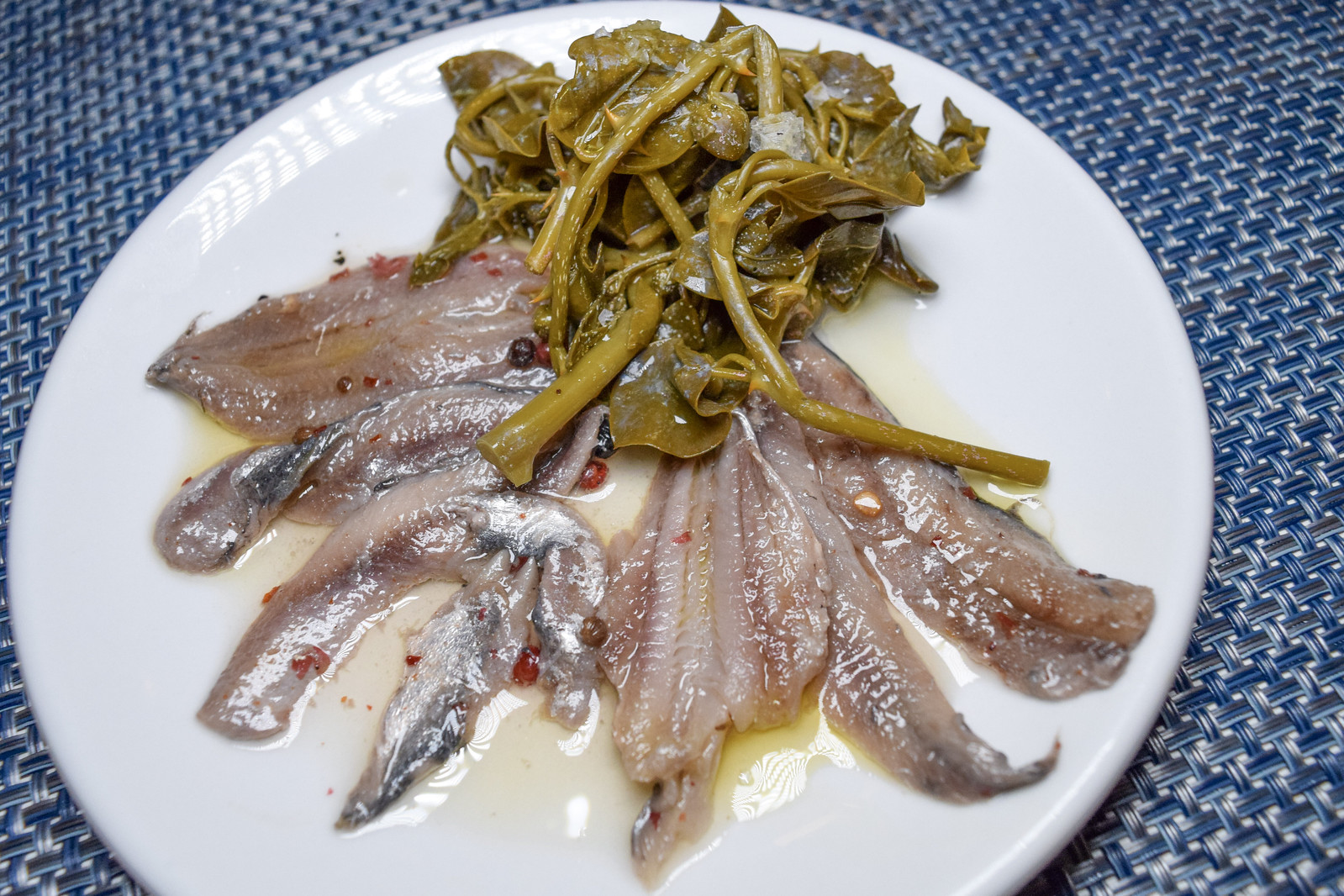 Unlike tuna, I’m always a sucker for ordering sardines on a Greek menu. This “Sardella Pastí” plate was comprised of sardines cured in fresh herbs, caper leaves (my favorite!), and extra virgin olive oil. You can just tell how fresh the ingredients are and how well they’re prepared. 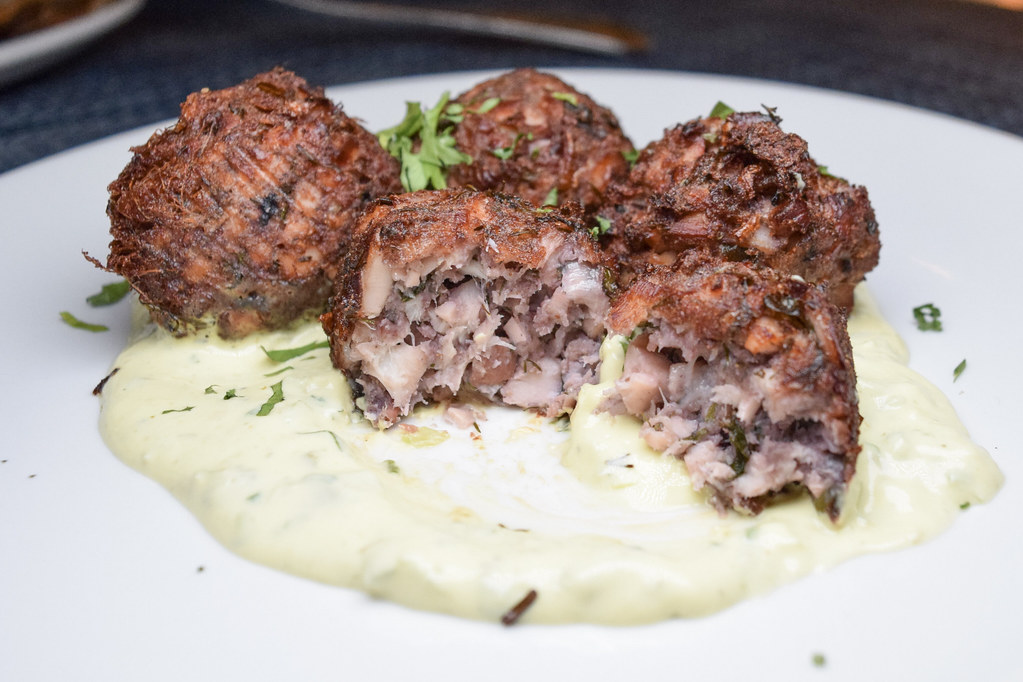 One of the most intriguing appetizers on the menu was the “Htapodokeftedes”. Don’t even bother asking me if I spelled that correct, because there’s a high probability I didn’t. It is a combination of two Greek words – one being “octopus” and the other “meatballs”. The tender octopus balls (now I understand why they named the dish in Greek, not English) were served with a yogurt parsley sauce and were absolutely amazing. 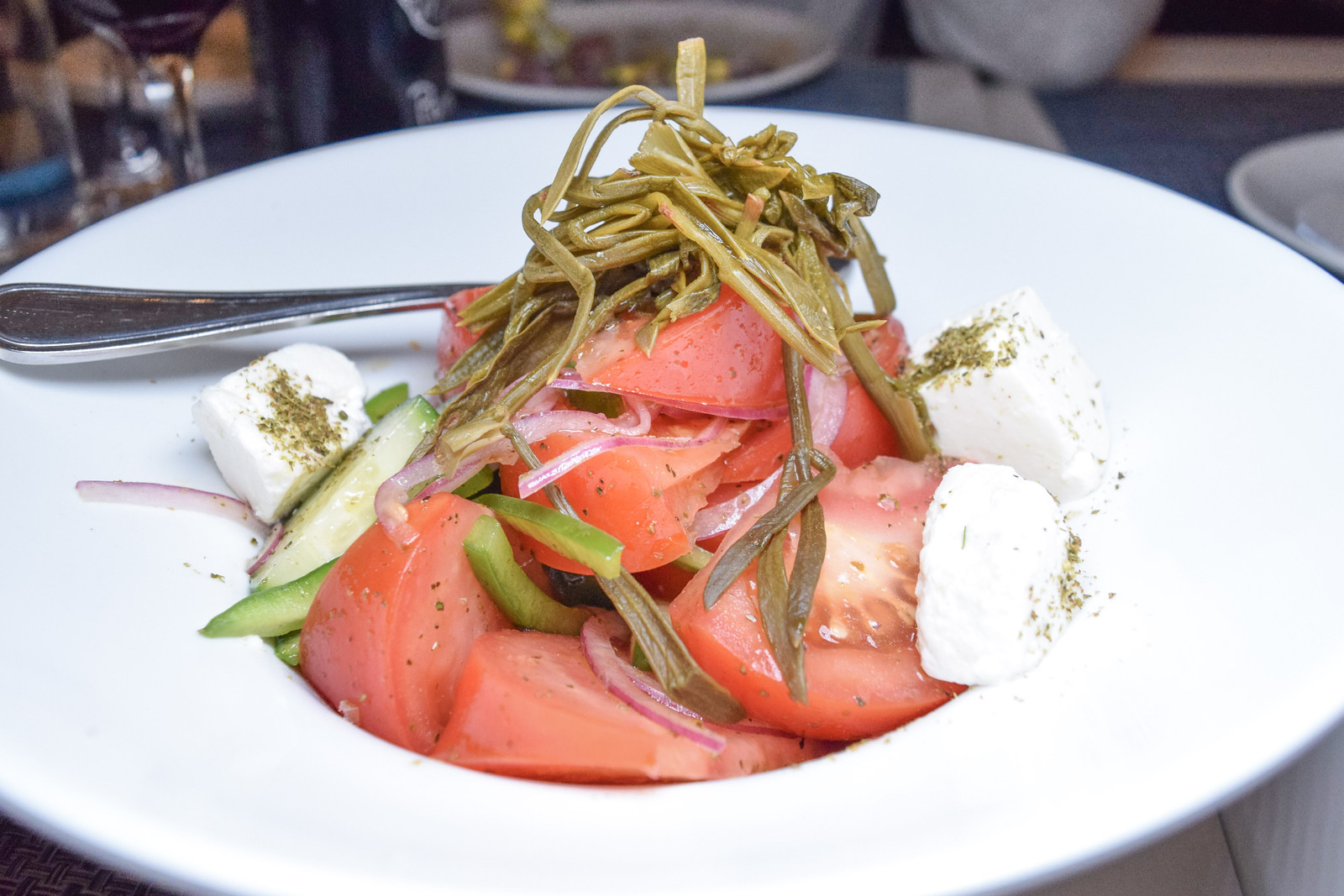 Then was the Horiatiki, or what I have always assumed to be a typical “Greek salad”. Tomatoes, green peppers, cucumber, kalamata olives, red onions, feta, and these greens on top(?). The menu lists these mysterious greens as, “kritamos ikarias”, to which Google leads me down a dark rabbit hole. So if anyone does know what these really are, please send me a message- because they were tasty as hell. 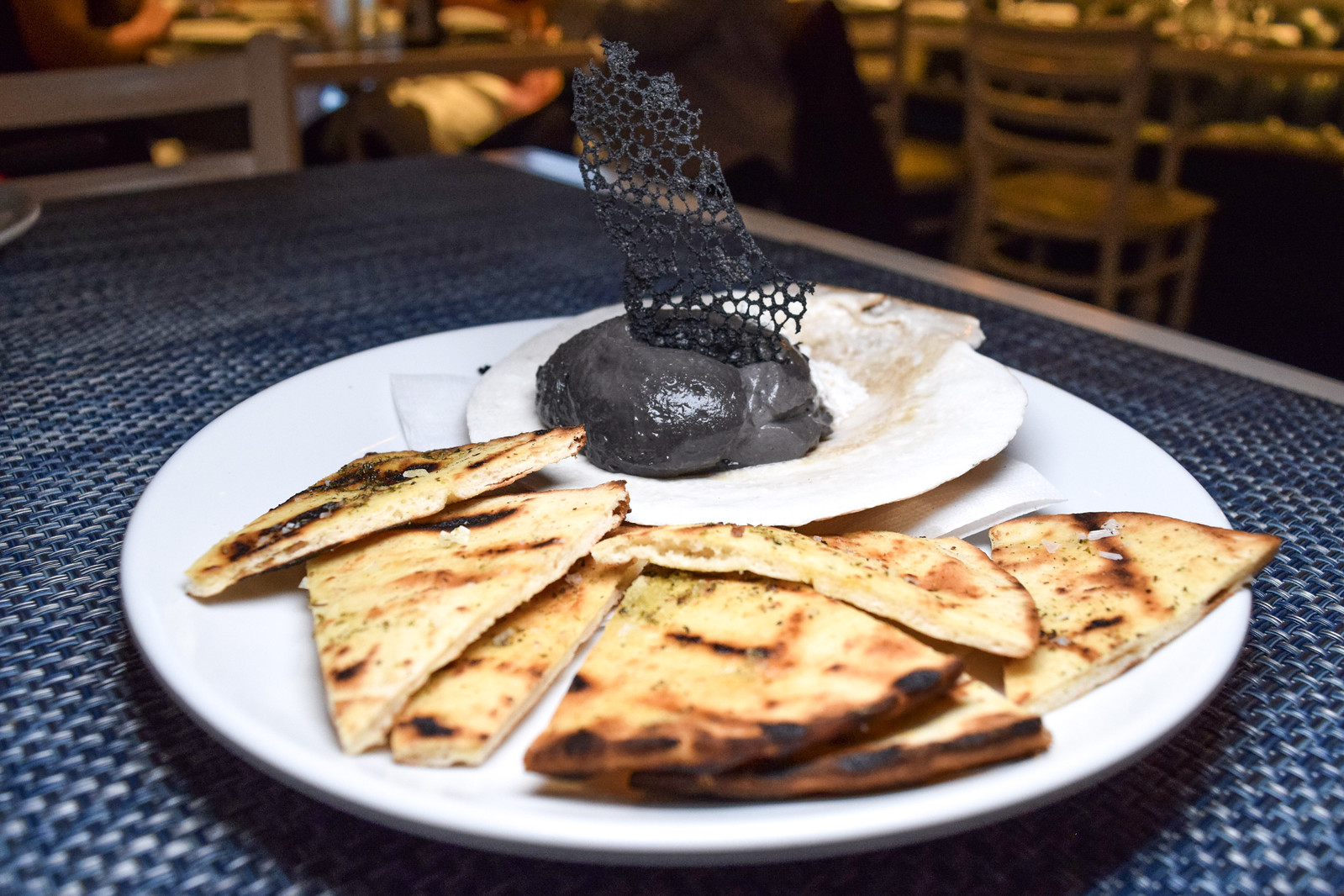 When this plate was first placed at our table, I was a little confused to be honest. When ordering the “Taramas Lava me Trufa”, I was definitely not expecting something as elegant as this. 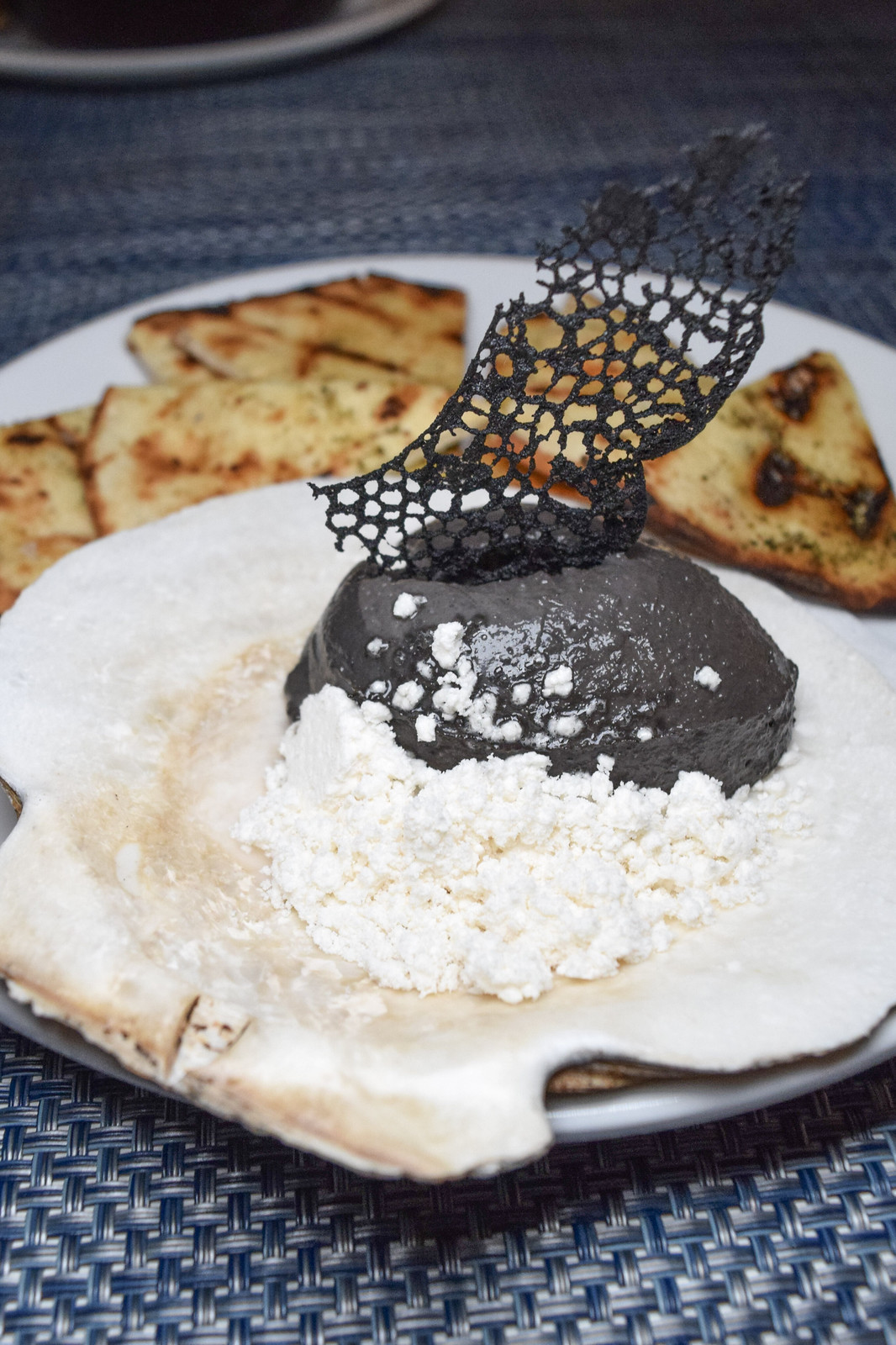 The dark charcoal colored mass is some type of heavenly combination of truffle, squid ink, and herring egg mousse. Yes – you heard all that correctly. And yes, the flavors were just as beautifully complex as you’d think. The presentation atop the clam shell was contrasted with the rustic grilled pita, but it all seemed to make sense. By far one of the most interesting dishes I’ve ever had. 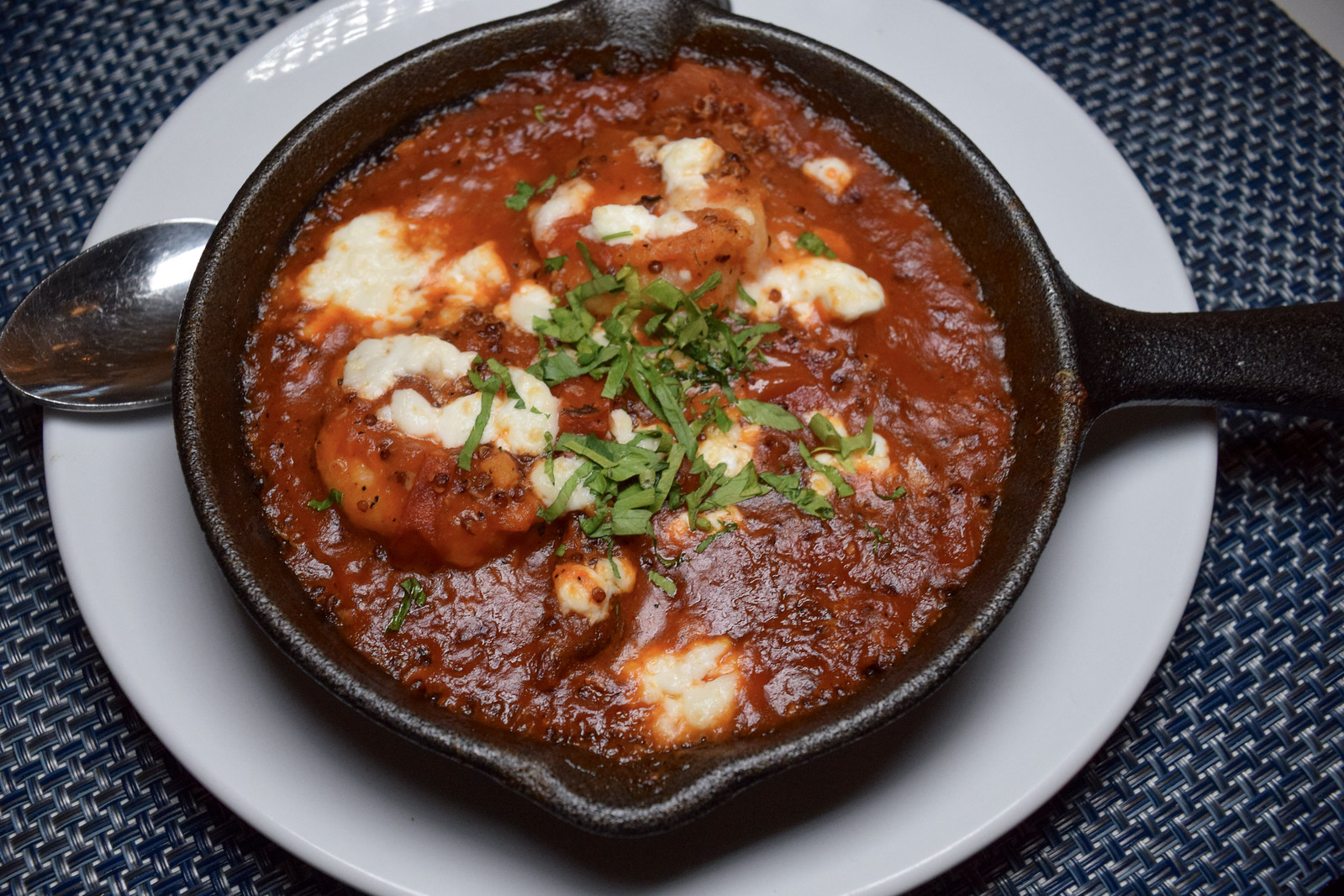 Cast iron dishes are also a go-to for me – it is the manifestation of fashion yet function. This dish, “Garides Saganaki Cast Iron”, included tiger shrimp, red quinoa, fresh tomato emulsion, and barrel aged feta. 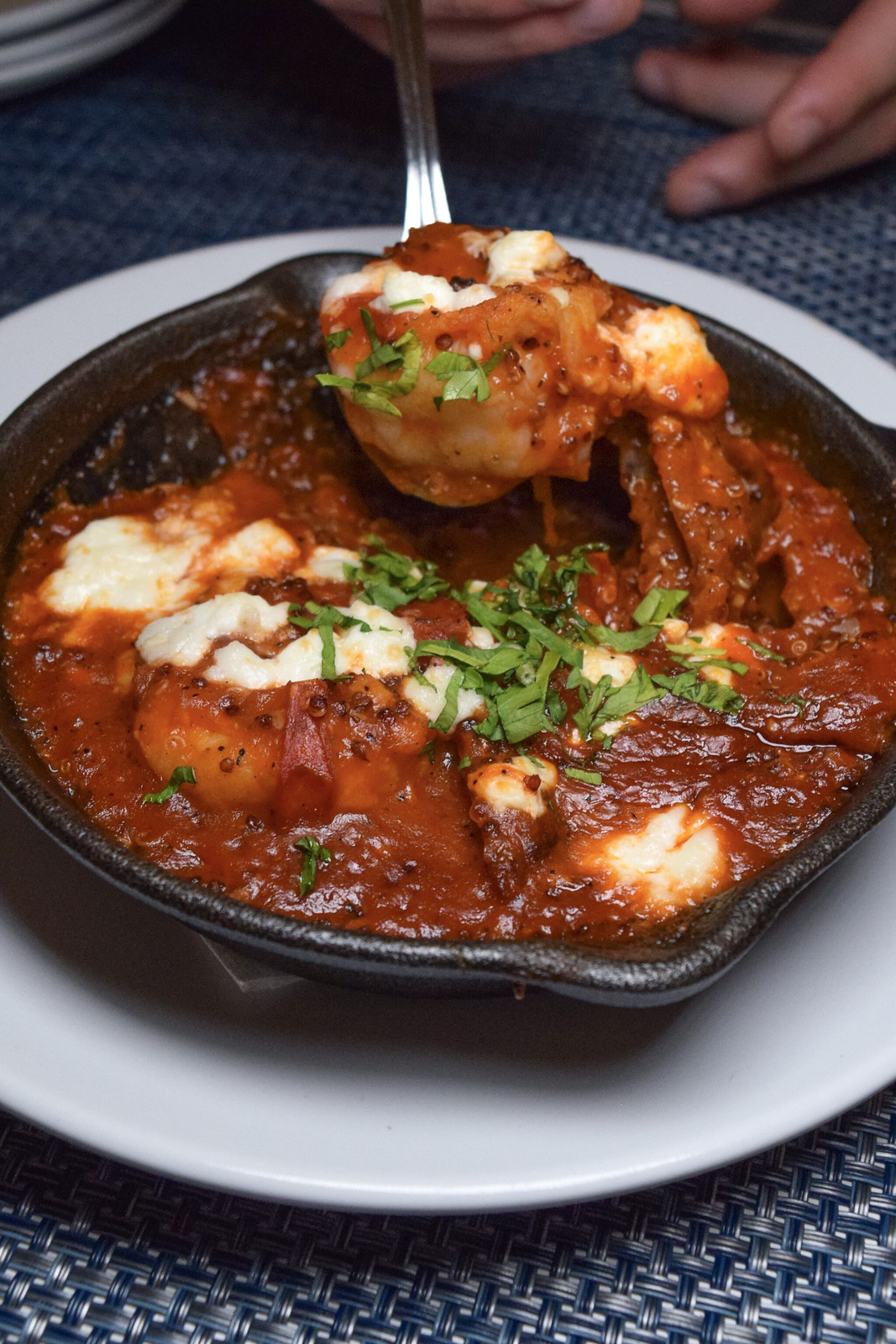 The tomato sauce was deeply flavored, and the quinoa (while noticeable) wasn’t too overpowering. Obviously my favorite parts were the large tiger shrimp and slightly melting feta cheese. 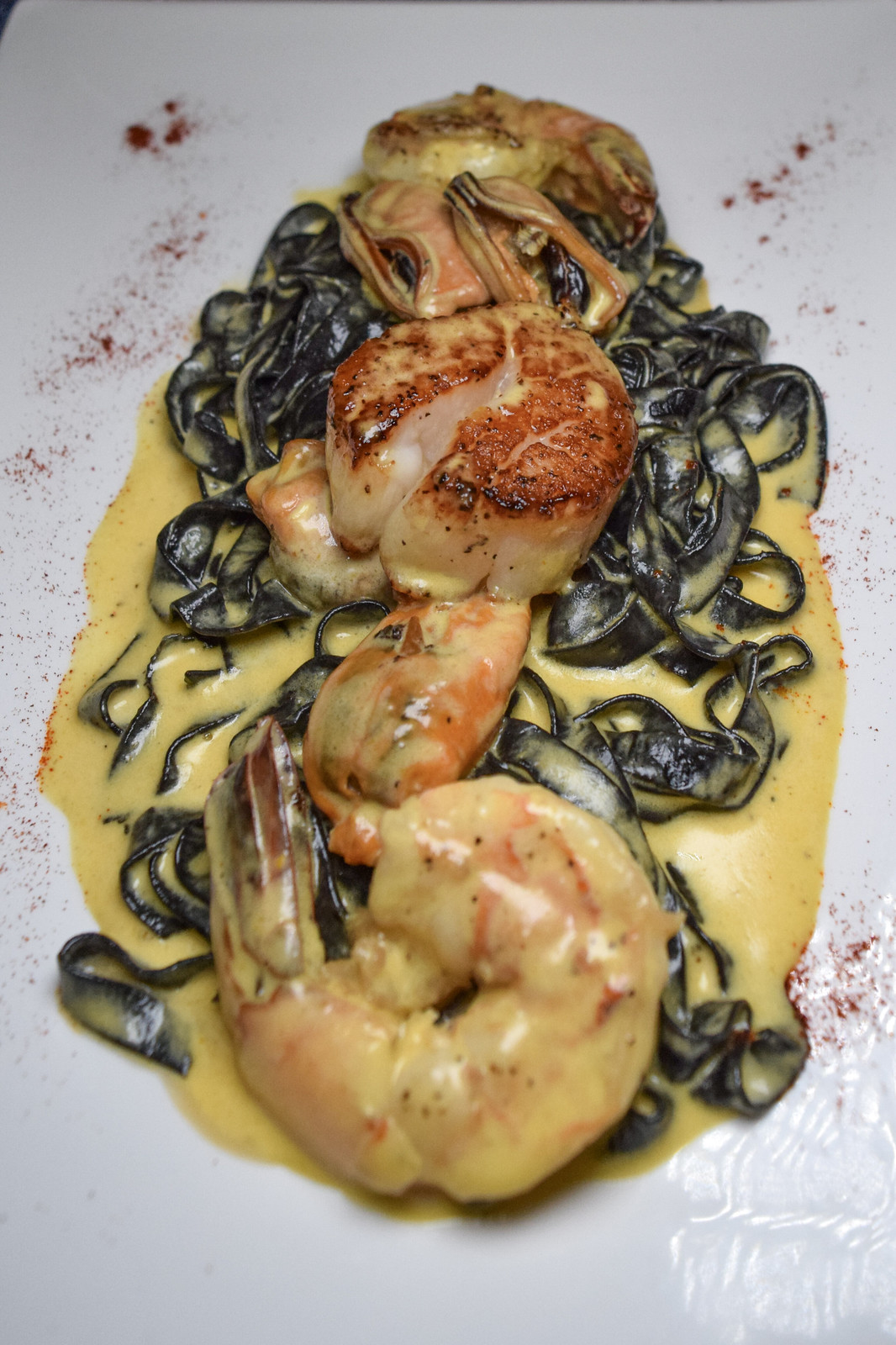 I’ve watched my fair share of Greek mythology videos online, but I still had to Google which God was “Hephestos”, for which this dish is named after. Apparently he was the Greek God of fire and metalwork, which I imagine makes sense because of the subtle spiciness of this dish. 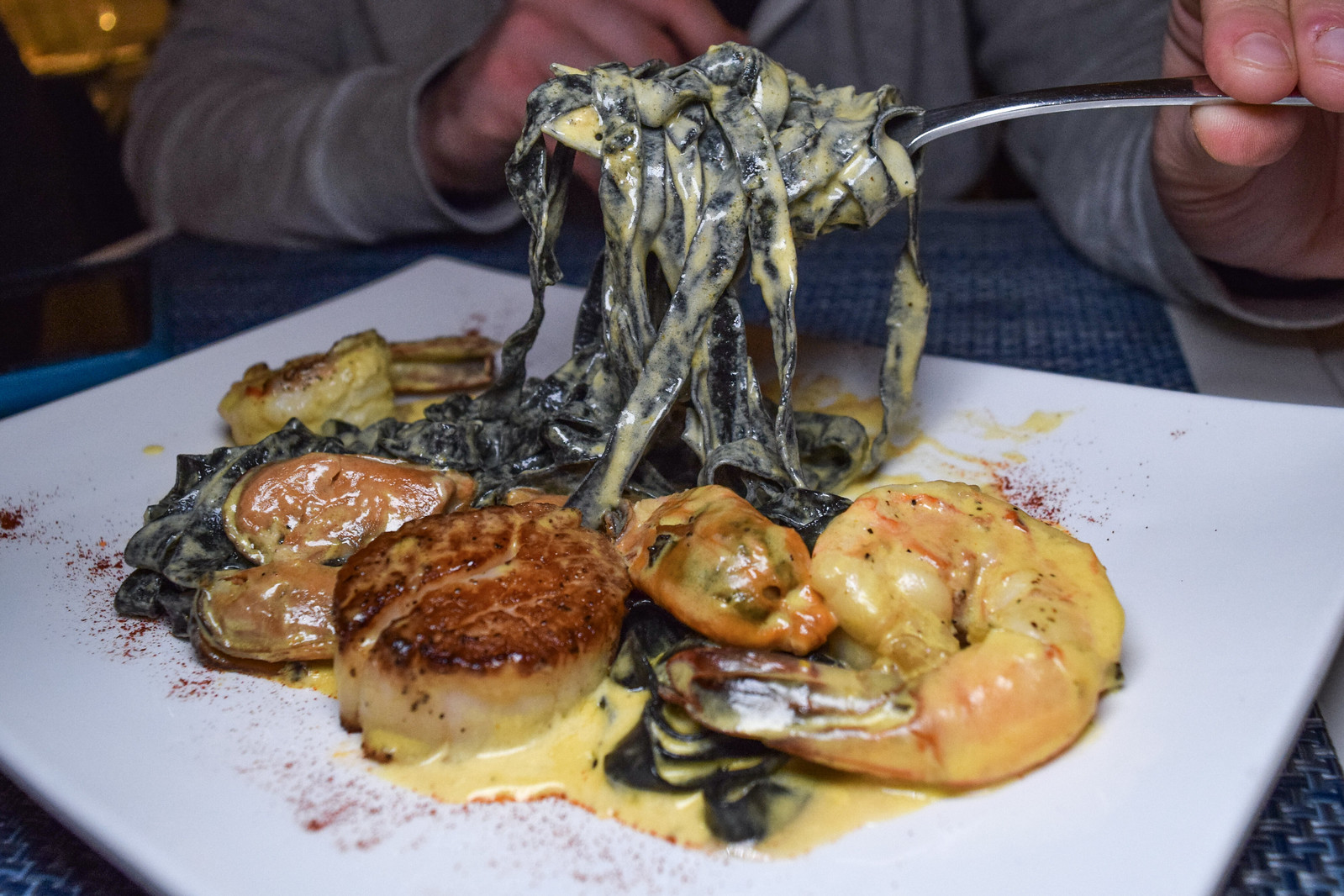 This velvety octopus ink linguine pasta was basically tossed with all the seafood from the ocean. King prawns, scallops, and green lip mussels are surrounded by a spicy yellow pepper emulsion sauce. The heat wasn’t overbearing, but had a pleasant aftertaste of spice. 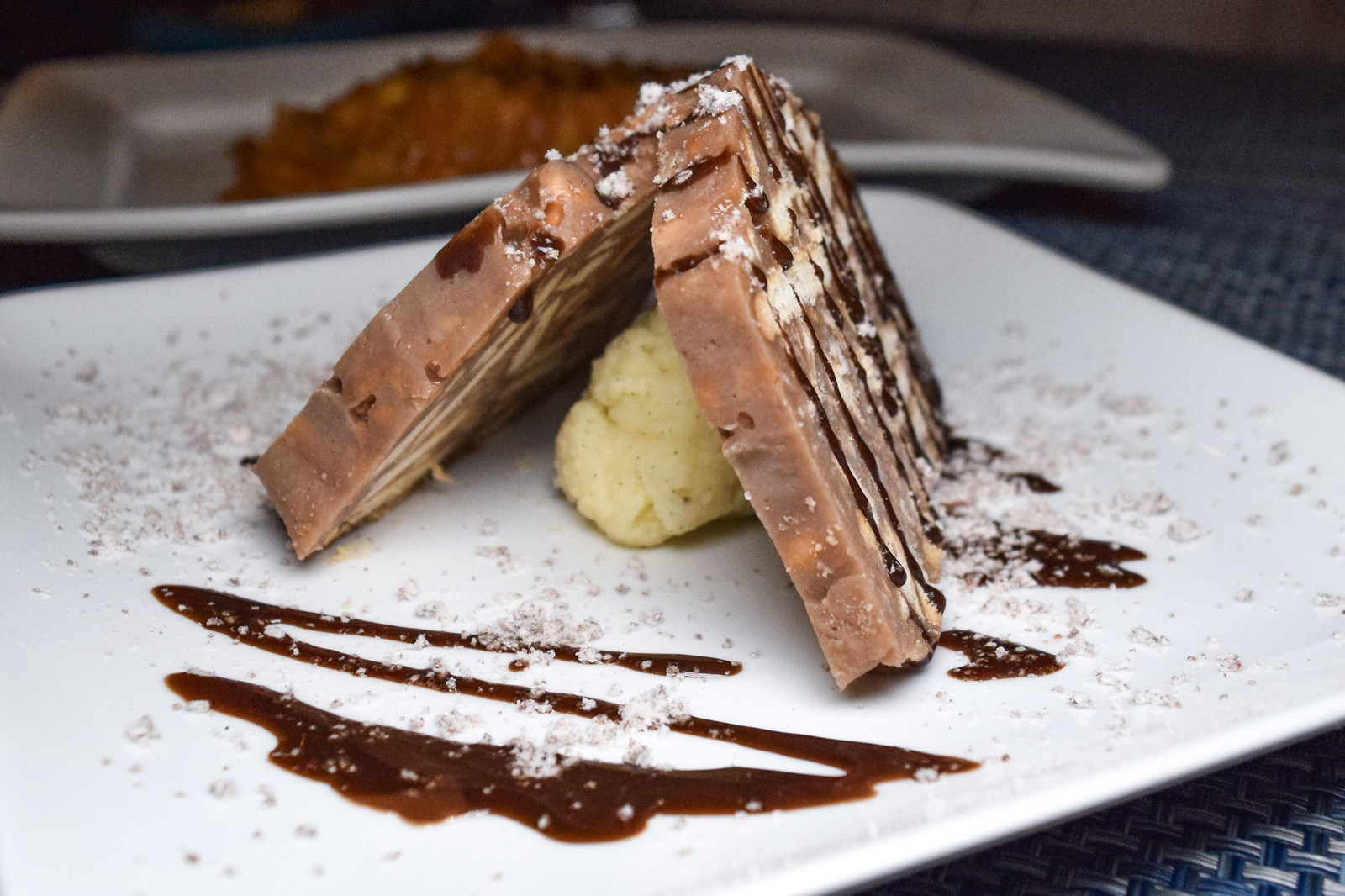 For dessert, we got the “Chef’s Secret” – Mosaiko. He didn’t exactly say what it entailed, but it seemed like chocolate biscuits with a custard in the center. I shouldn’t even say biscuits – these were more like frozen pillowy icecream slabs or something. Basically just “texturally flavorful” is the best I can come up with. 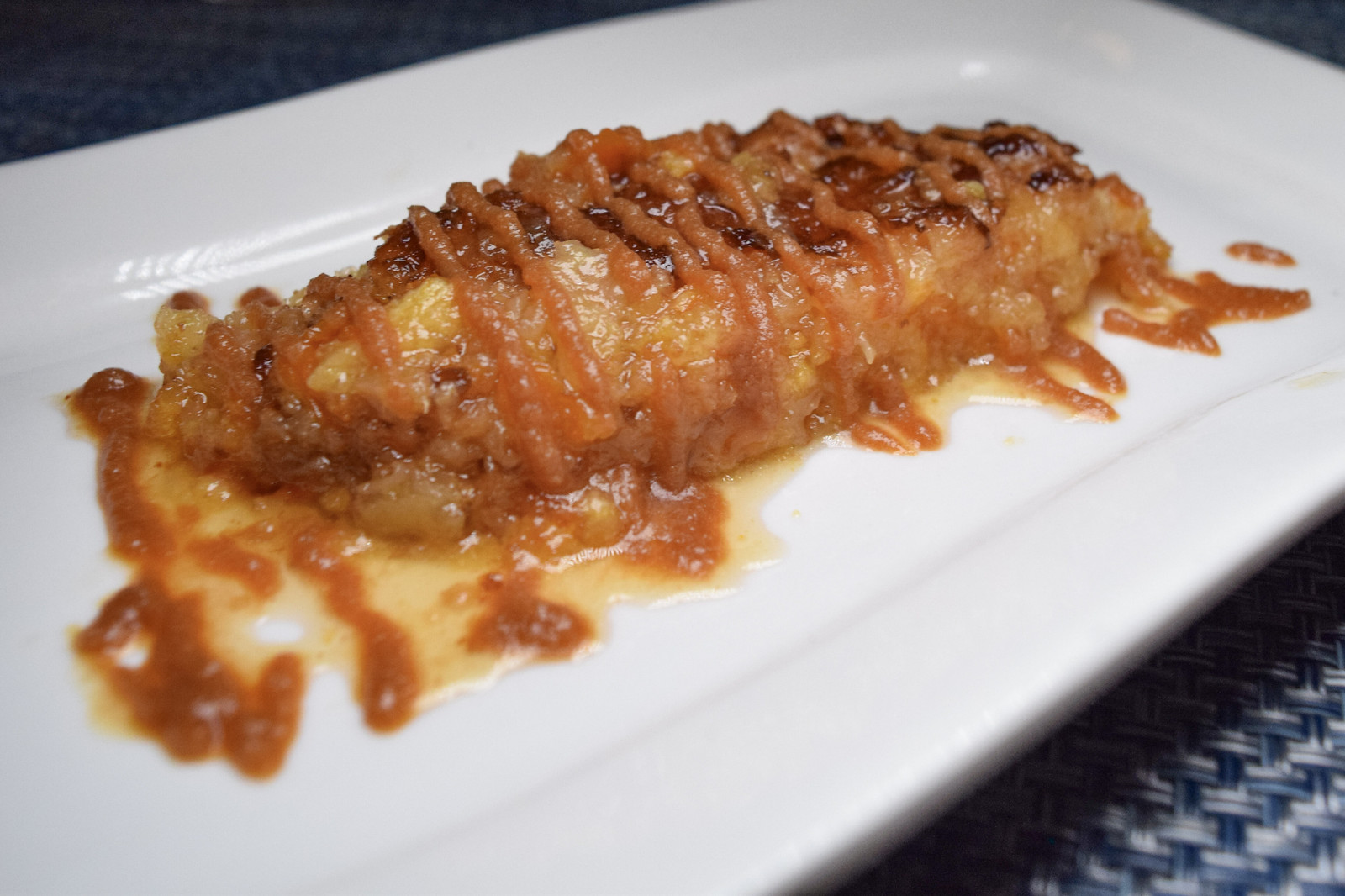 And we had one more dessert that night because we’re perpetual fat asses. This was the “Portokalopita” – a traditional Greek yogurt orange cake. Typically not something I would order, but I was pleasantly surprised. You can really taste the fresh oranges in this; and the acidity worked well with the sweetness.

I can’t say how much I love this restaurant, and how hopeful I am for it to flourish. Thanks again to Chef Poulmentis along with the team at Akrotiri, and I hope to be back (VERY) soon.