Philadelphia… the city where every popular sandwich joint is named after a man’s (or possible mobster’s) first name. Tommy, Tony, Jimmy, John, you name it – they got a sandwich spot for you. Besides the obvious cheesesteak, Philly is also known for their roast pork sandwiches. How the two came to be so popular in this area, I have no idea – but feel free to Google it and let me know because I’m curious and lazy. 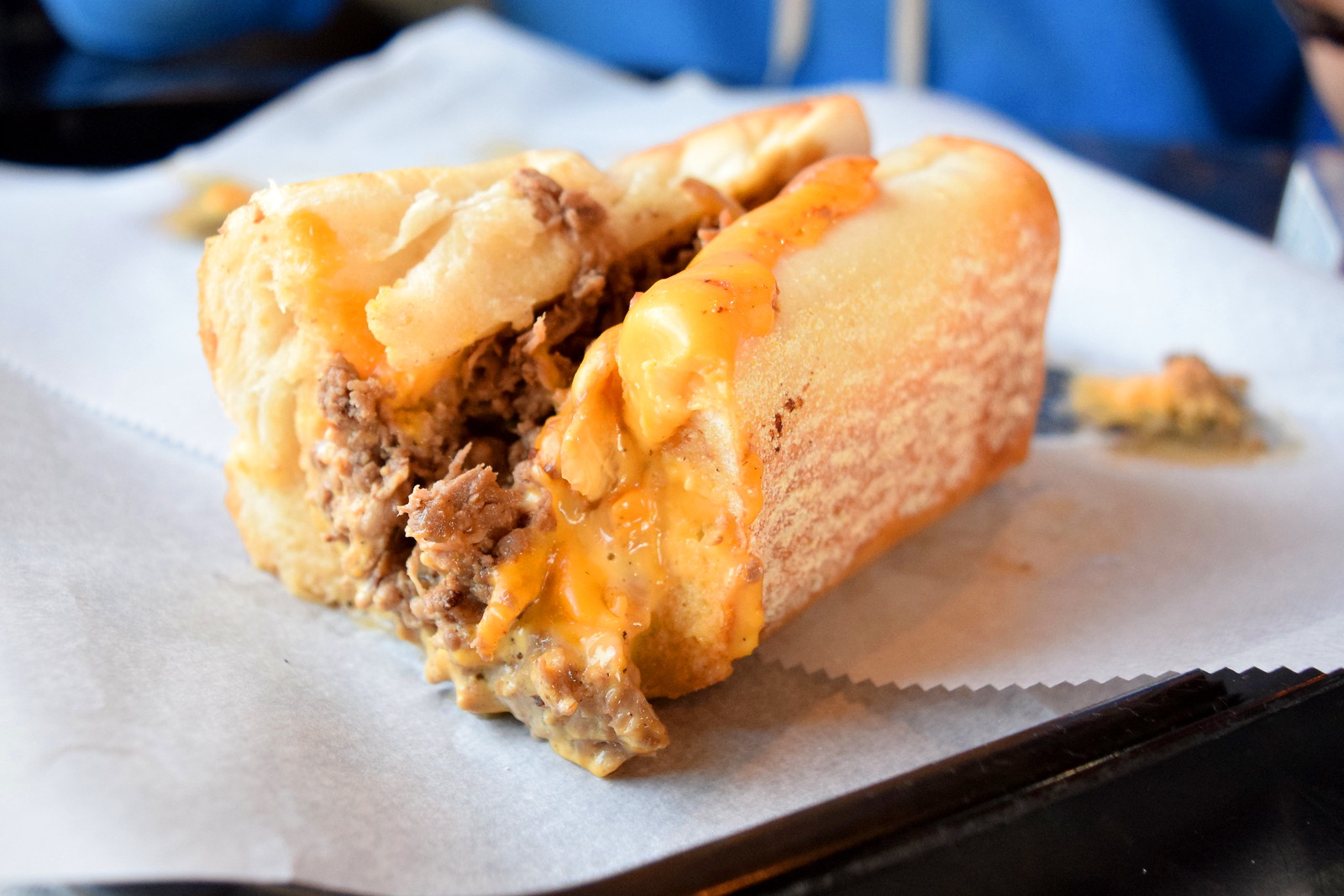 Now trust me, I am no expert on this subject. I freaking hated cheesesteaks beforehand and this was my only trip to Philly in my life. So, if you too have never experienced said sandwiches from the city of Brotherly Love, feel free to see how I managed these 5 recommendations in a 3 day time span. However, if you wanna talk shit about my choices, then be gone.

Let’s start with the OG’s because up until that point, Geno’s and Pat’s were the only cheesesteak spots I’ve ever heard of (thank you Food Network). 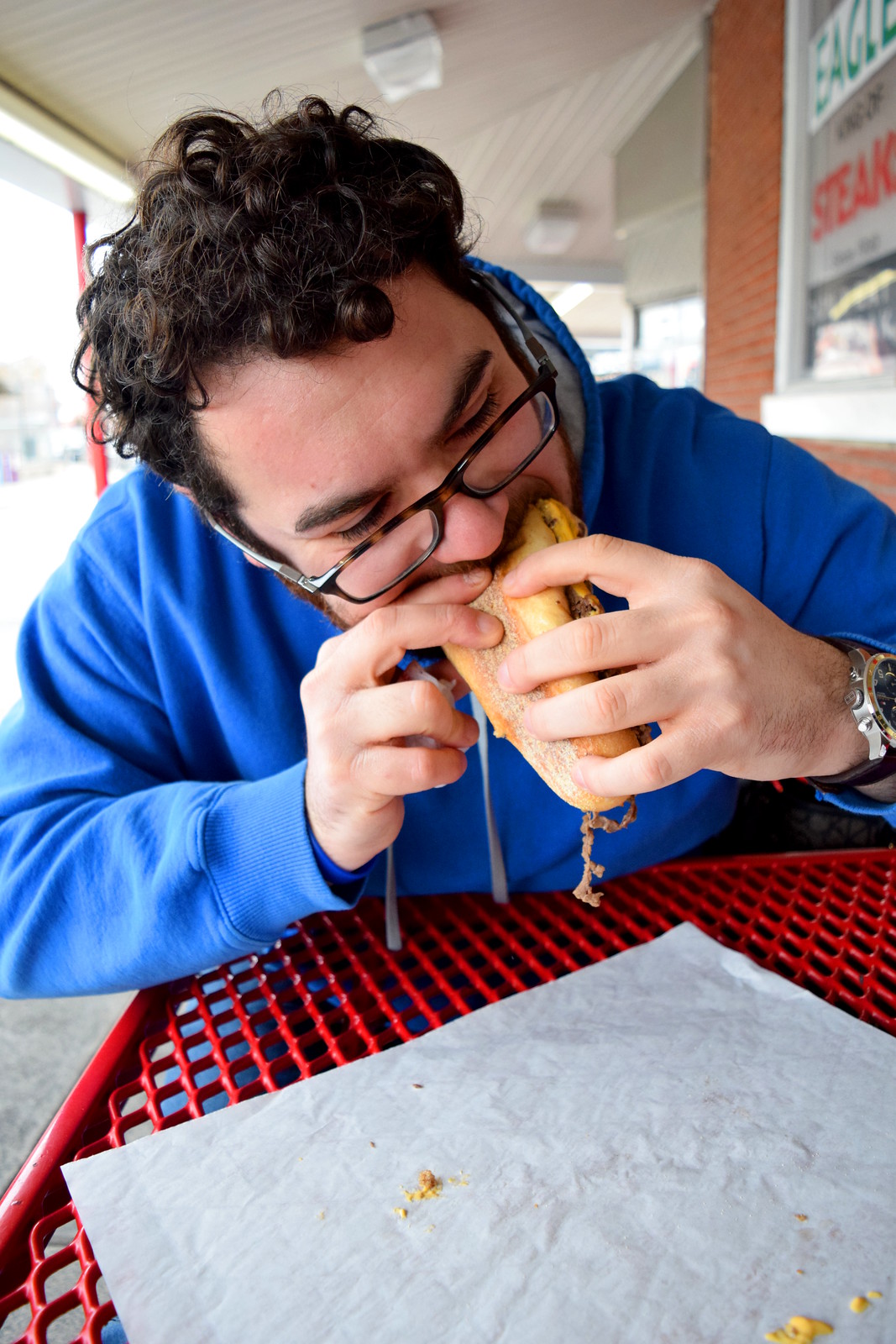 Yeah, we get it – ya’ll are across the street from one another and apparently there are diehard fans from both sides ready to brawl at any given moment over the subject. If this is the first time you’re hearing this, I’m sorry for breaking it to you, but they both suck. And to add salt to an open wound, their “beef” is apparently a publicity stunt. Go figure.

Shoutout to my mom though for telling me “don’t say anything mean online or they will get mad”… Ok, mom, I’ll say only good things about everywhere and lose all credibility on the subject.

My first EVER “real” Philly Cheesesteak was at Geno’s. Cute little outdoor seating, bright orange facade, overall appearance looked clean. When walking up to the order window I warned my boyfriend to say it “correctly” or they would get mad (according to Food Network they could kick you to the back of the line). Honestly the dude at the window gave no fucks and took our order as is (example: “uhhh can I have it with the onions and the whiz stuff”). 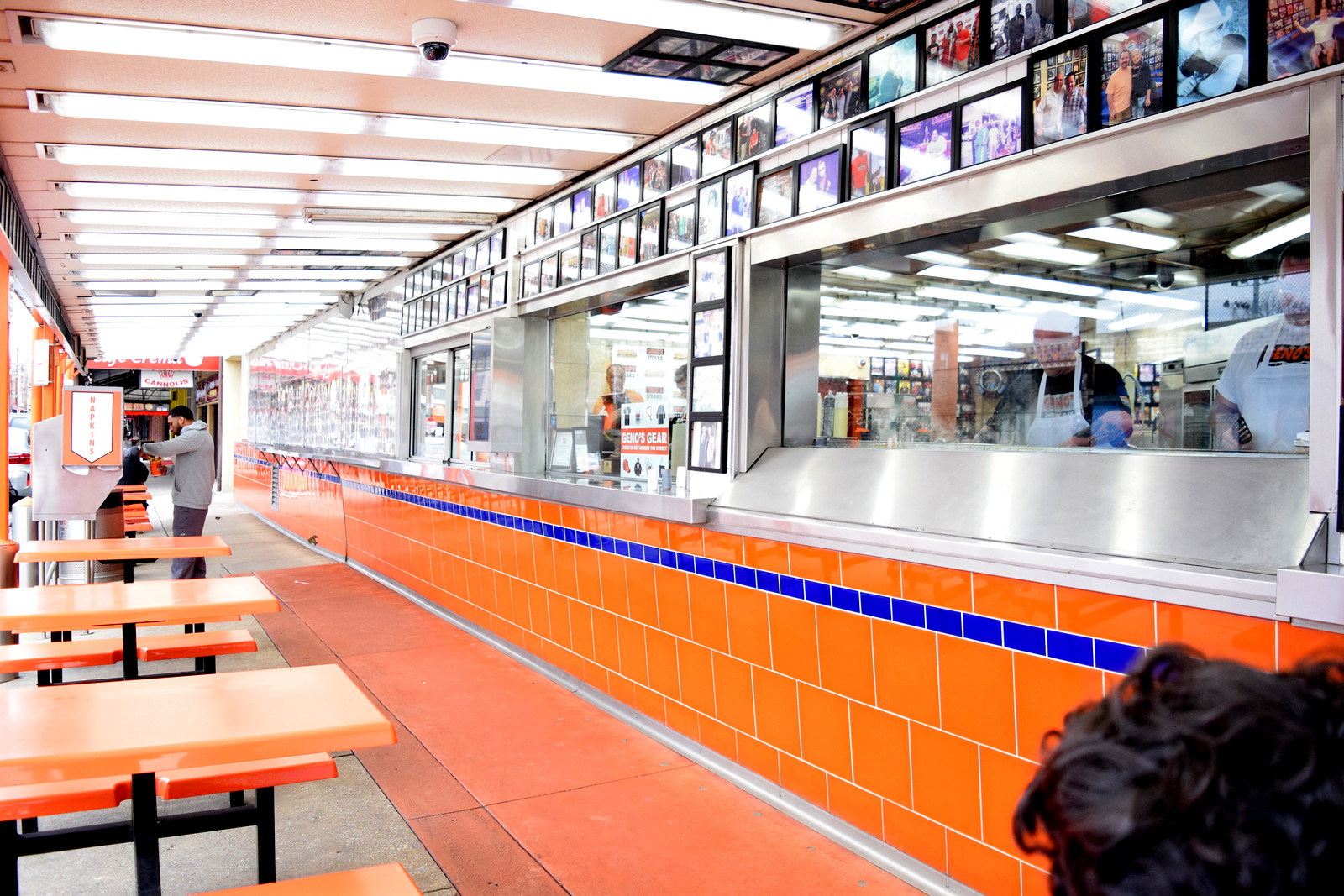 We agreed that our first go-around for all establishments we would order each sandwich as they were intended – no cheese swap (just whiz in this case) and whatever else was recommended. 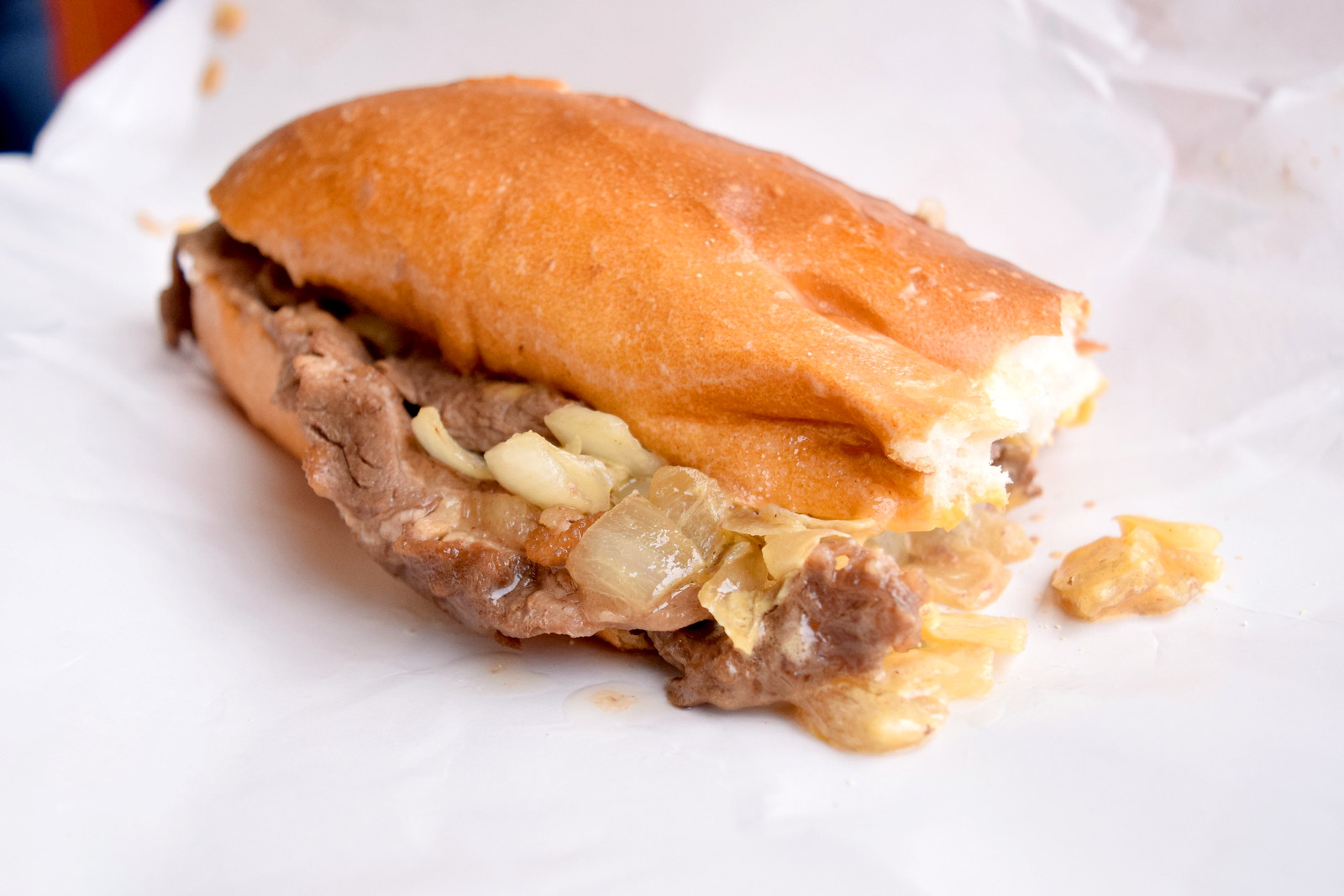 It tasted like what I thought a cheesesteak was supposed to taste like – dry meat slivers and bland orange sauce. So I was like OK – not too bad guys, not too bad. It was our first meal of the day so we quickly ate the whole thing and then walked on over to Pat’s.

At just a mere dollar more, you can actually taste a vast difference between the two. The meat is juicier, and the “cheese” seemed more fresh if that is even possible. Also should note that it was a lot easier to eat with the toppings almost hotdog-style versus Geno’s where it just fell out the sides. 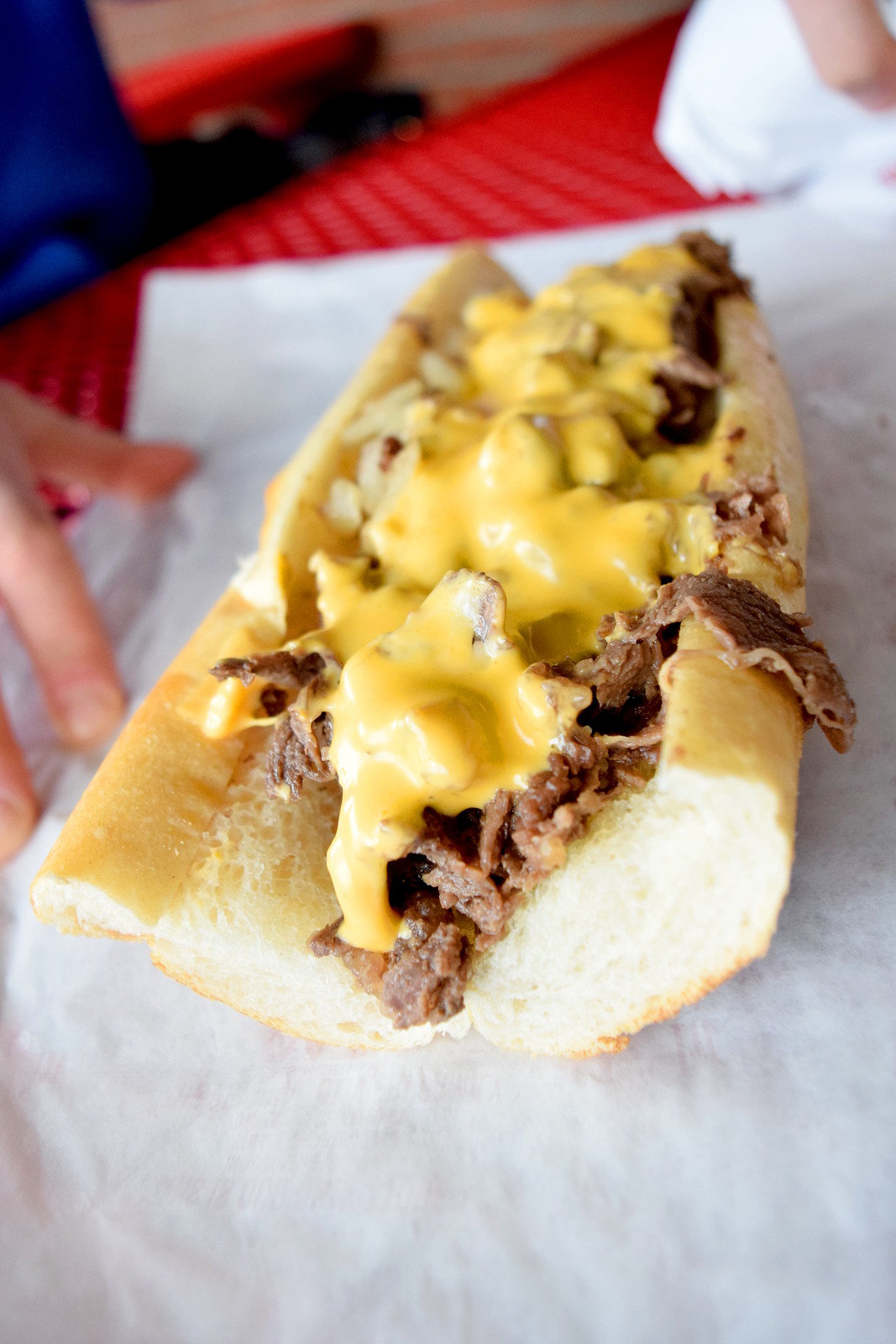 And this is saying a lot because when we ate Geno’s we were starving and demolished the whole thing immediately. Now, we were more full and able to grasp the flavors and textures of this sandwich without forcing ourselves to just engulf it whole. 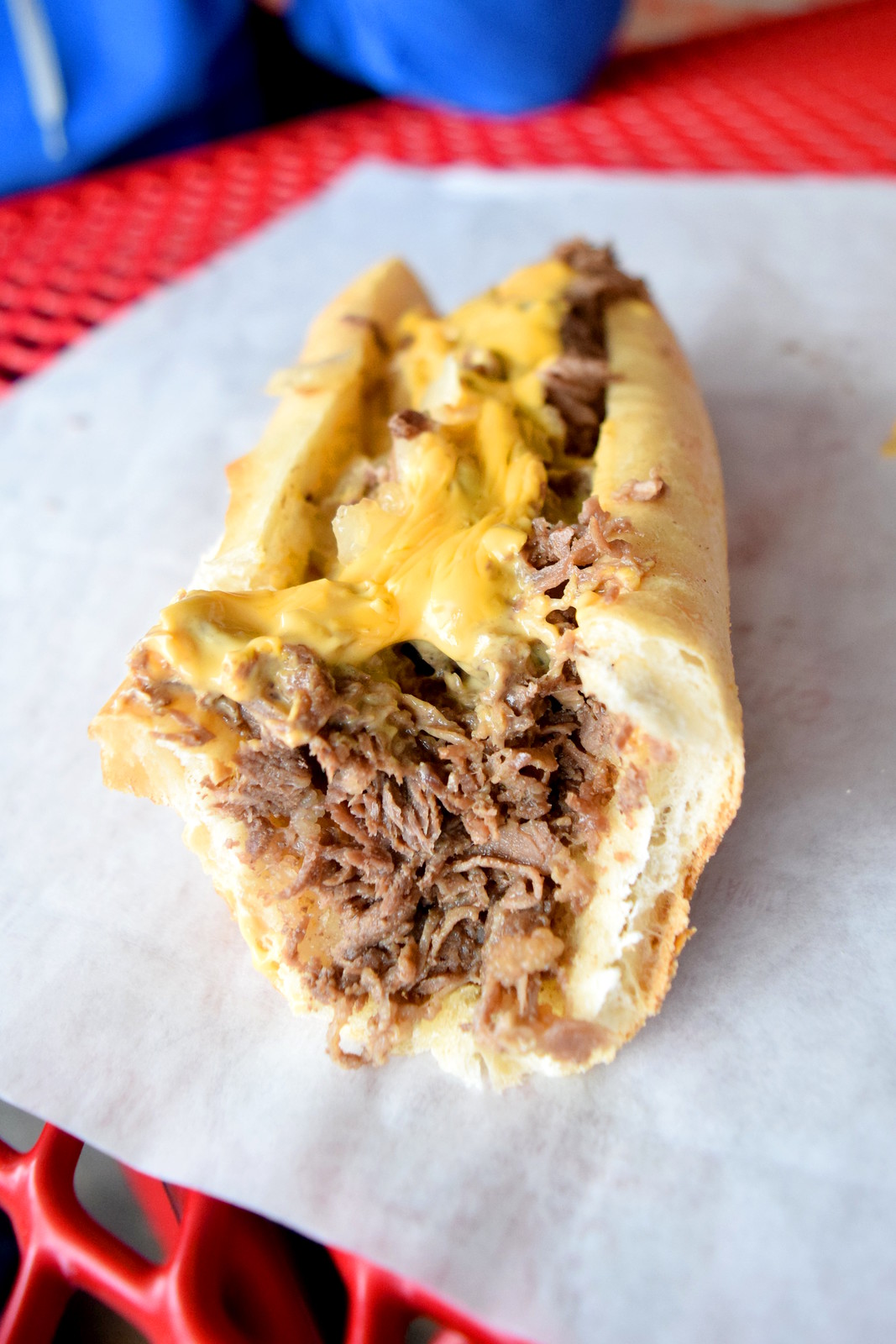 Originally thought Geno’s was a 6/10, but the rating becomes more and more skewed as we go along… Because of this, I can only give full ratings at the end.

If you need a breather between demolishing 2 hoagies and/or need a potty break, there is a bar situated just across from both Geno’s and Pat’s. They have a pretty extensive beer draft list, and they have air conditioning for those who care! Place is called South Philly Bar & Grill (by the garage – maybe associated? I dunno). 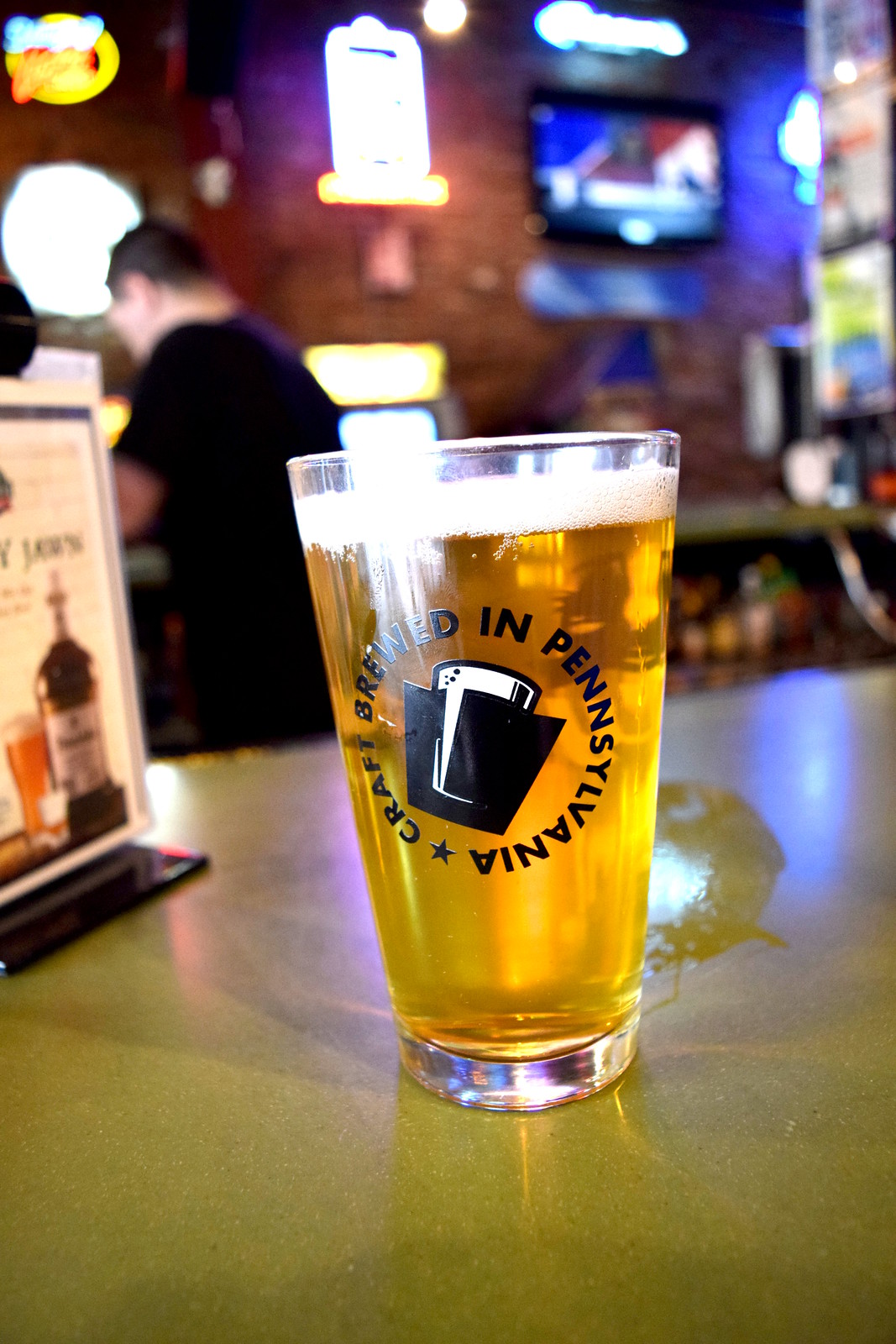 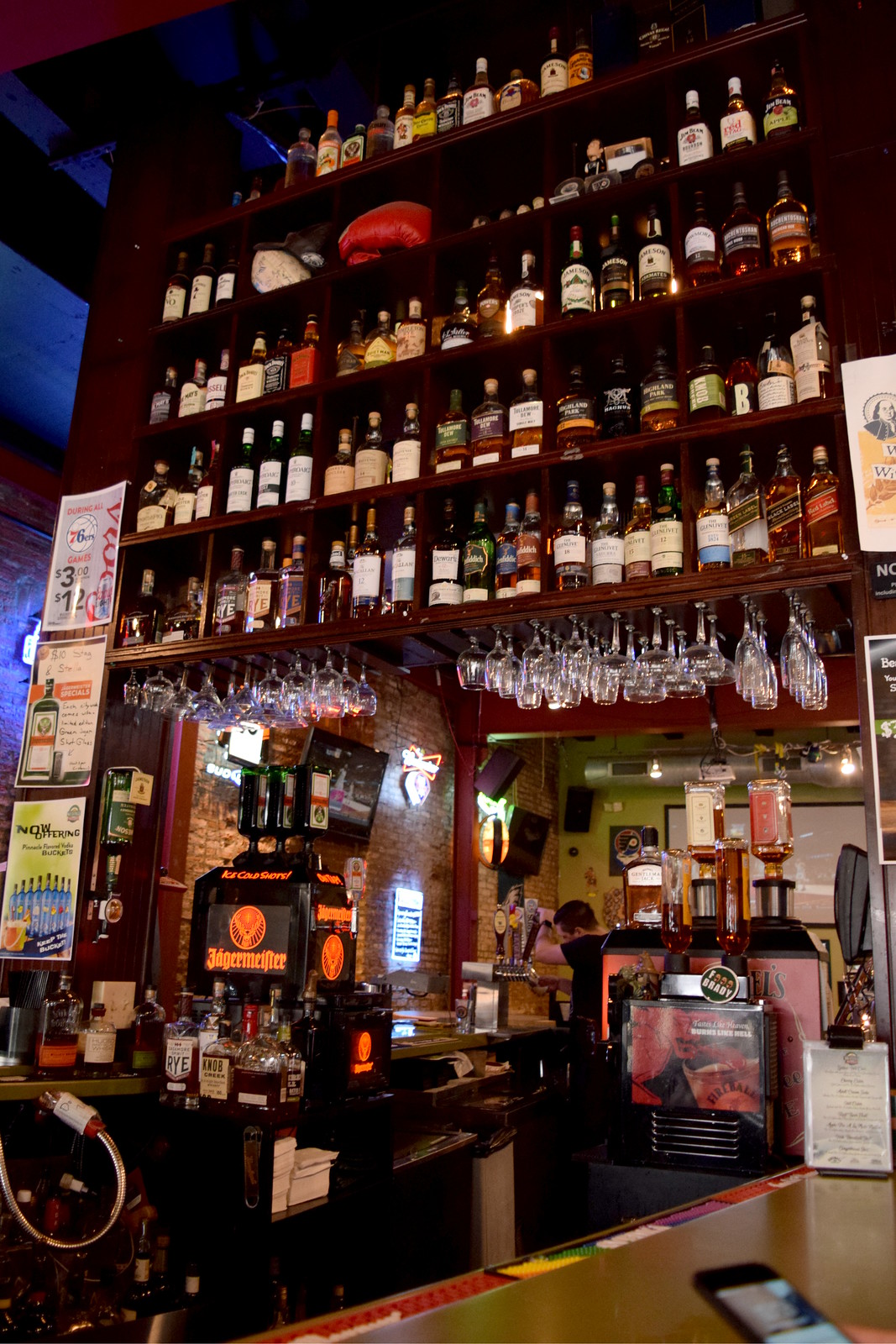 We did come here after the 2 locations mostly to pee and wait for our Uber.

You’re probably gonna need a light food-day between the 1st and 3rd days (unless you’re a beast, then go at it). Besides my below suggestion, totally fuel up on some salad or tofu or something. Your body will thank you.

Located in the Reading Terminal Market, you’d think you would only find tourist traps and abused sandwiches. On the contrary, an overwhelming amount of people mentioned to go here for a pork sandwich when I was specifically asking for Philly Cheesesteak options. I thought to myself – but… we’re talking about completely different animals here. Literally. CheeseSTEAK versus PORK sandwich. I really didn’t understand. 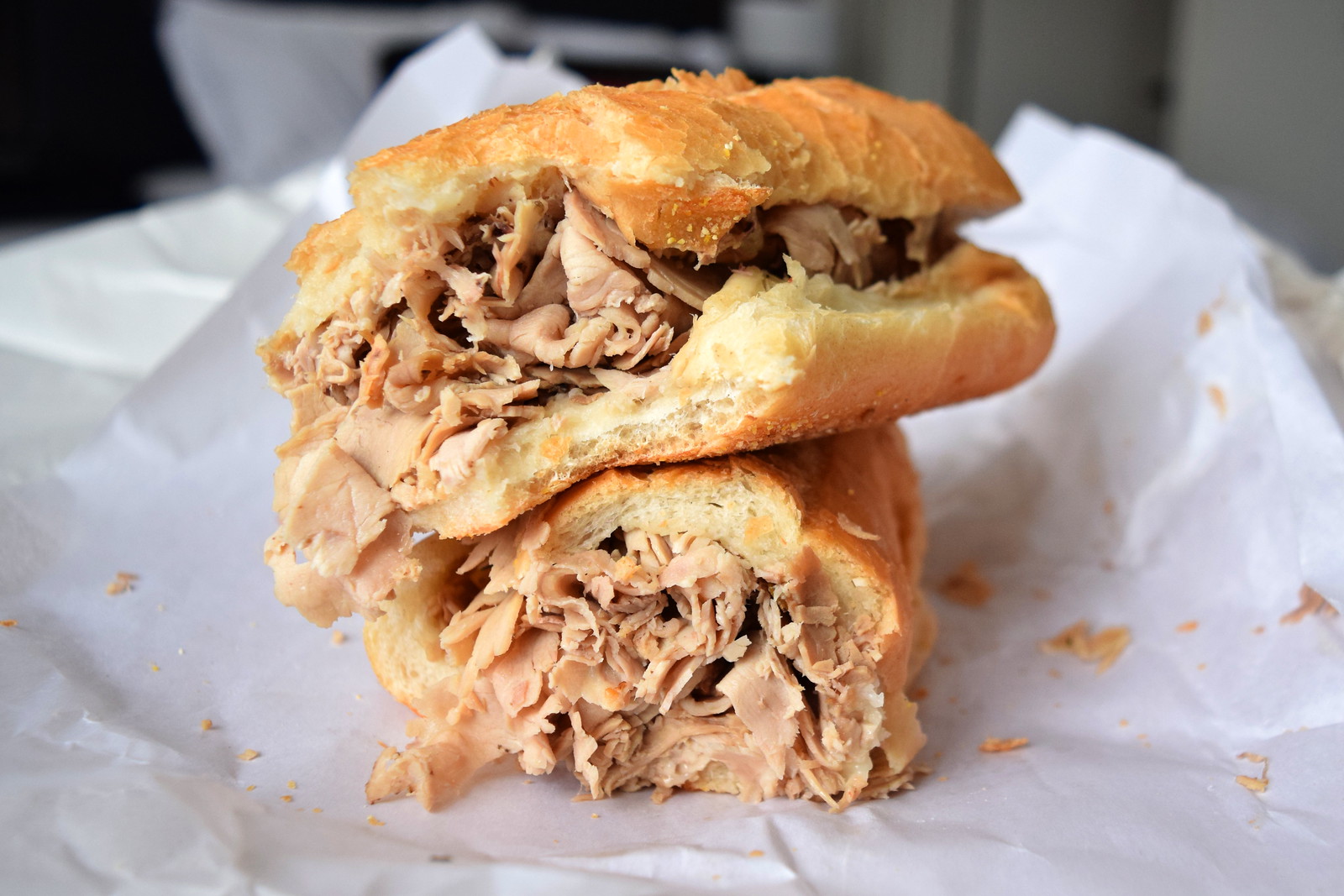 That is, until I tried it. I’ll be honest, this place was very crowded and I was being rushed to order so I didn’t know if I should try their cheesesteak or get one of the pork sandwiches. I managed to stick to my guns with being original, but added the dollar extra more for sharp provolone. There were absolutely no seats in the entire place, but luckily our hotel was across the street. I happily carried my warm sandwich back to see what the whole “roast pork” spiel was about. (Side note – only 1 out of the 5 establishments that took credit card from my recollection). 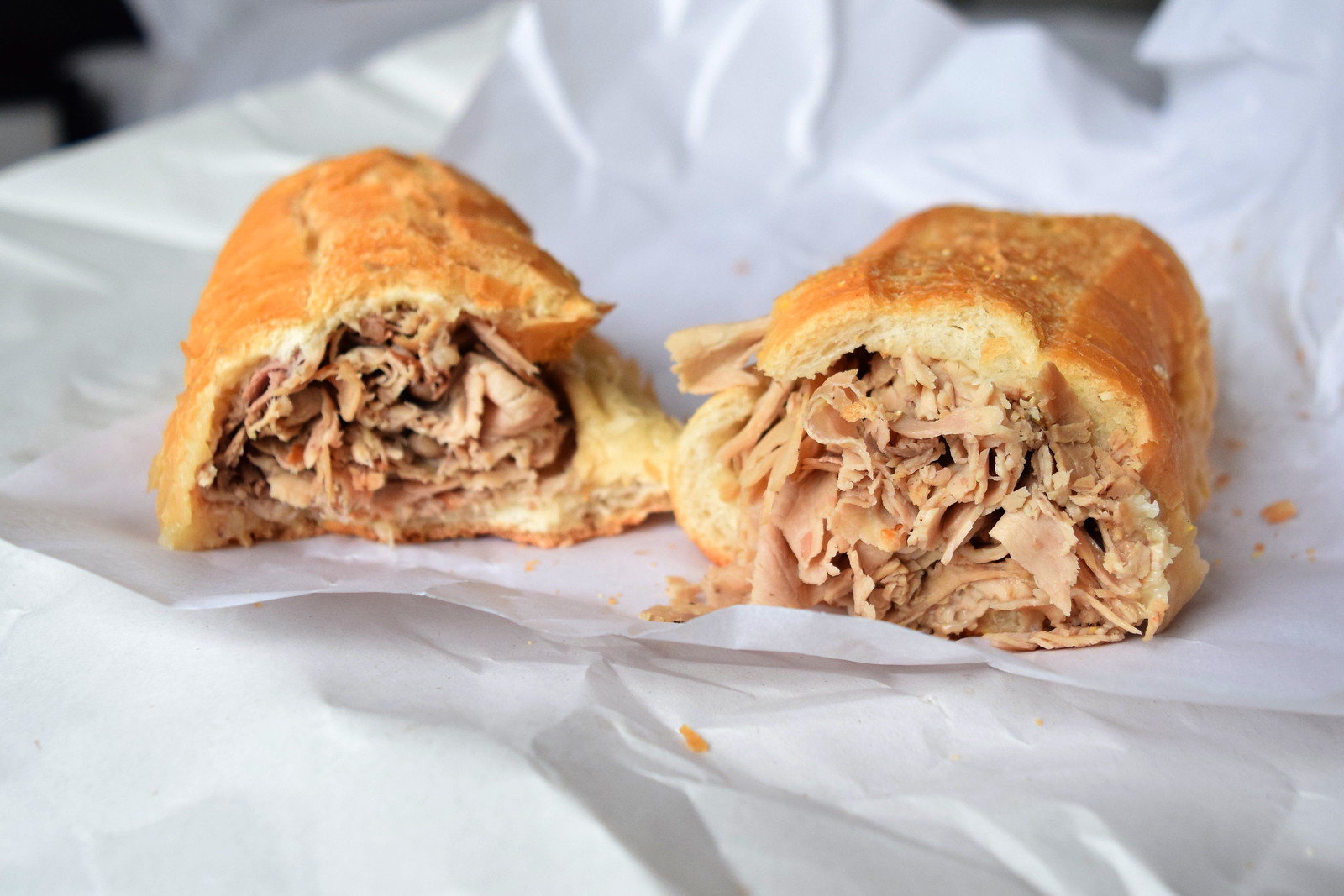 First bite – it was juicy. It was almost as if they added extra au jus of some sort to the bread to keep it that way. Most likely the meat was already that juicy in the first place. I took a few bites in, and while I was happy, I was missing something. 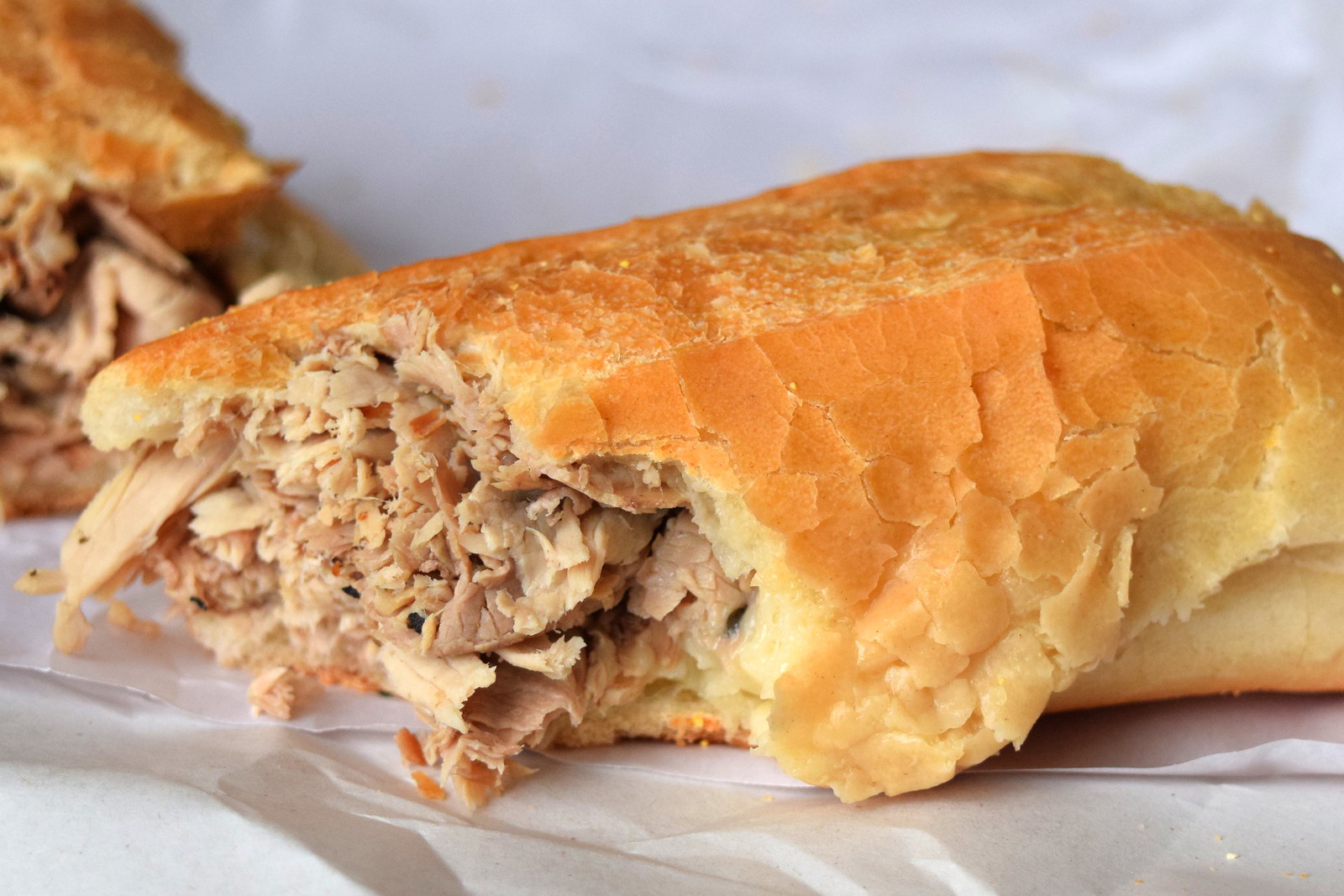 I asked my boyfriend if they gypped me on the cheese. He checked and confirmed that it was indeed there, but only a small slice. Like…. you gonna put one slice of provolone on my whole sandwich for one dollar? That was my only issue – cheese not evident enough. Overall though, the sandwiches just keep getting better and better.

While my last two last sandwich spots are not related whatsover, and located nowhere near each other, they were definitely the top recommended by followers and friends. They deserved their own day in indulgence.

John’s Roast Pork – Not sure of the price?

Located idontevenknowwhere somewhere south apparently (you’d prob need an Uber), was a little place called John’s Roast Pork. I was told (by many people actually), that it was famous, and an institution in and of itself. So we stepped on through the plastic door strips to get inside and ordered our sandwich. 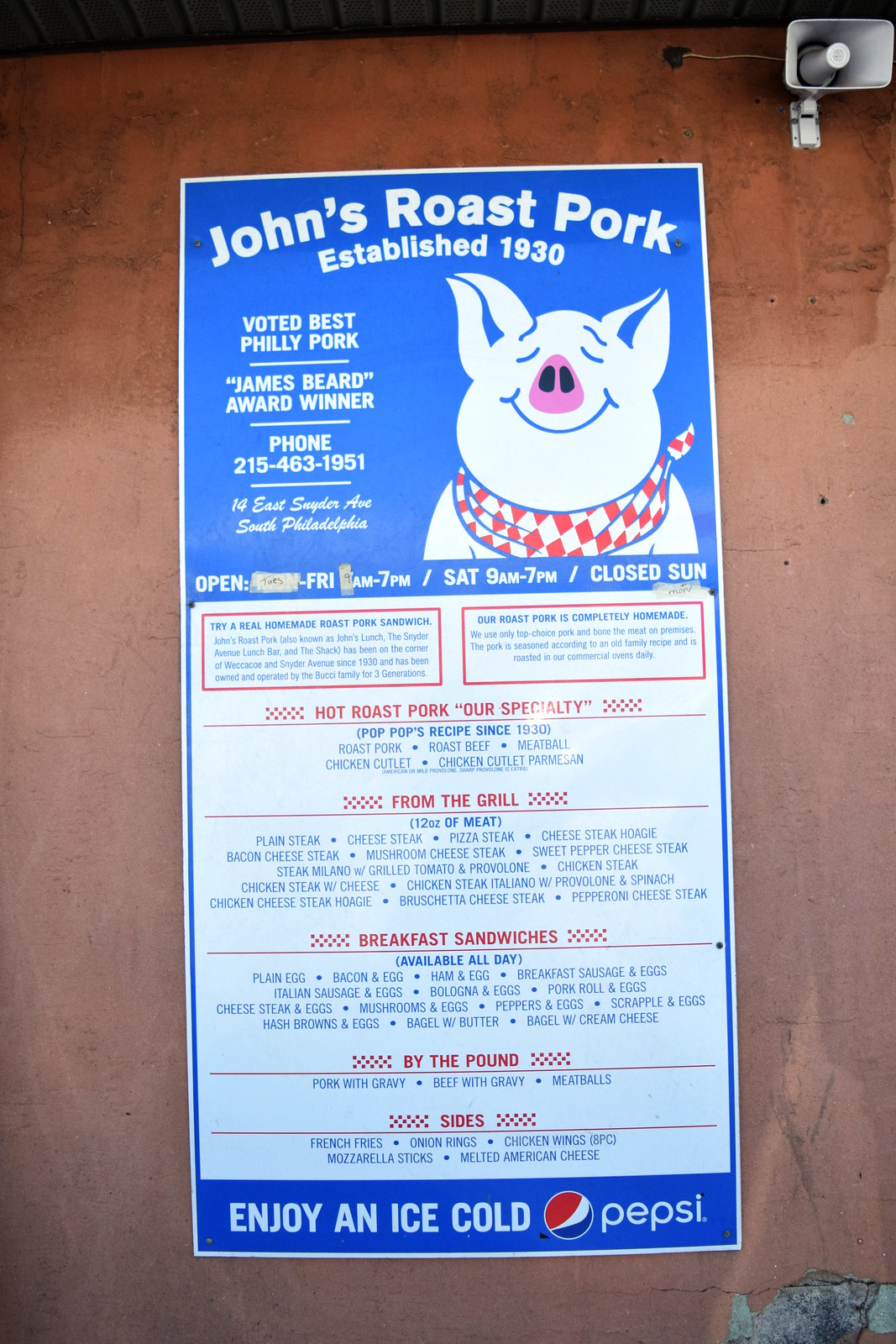 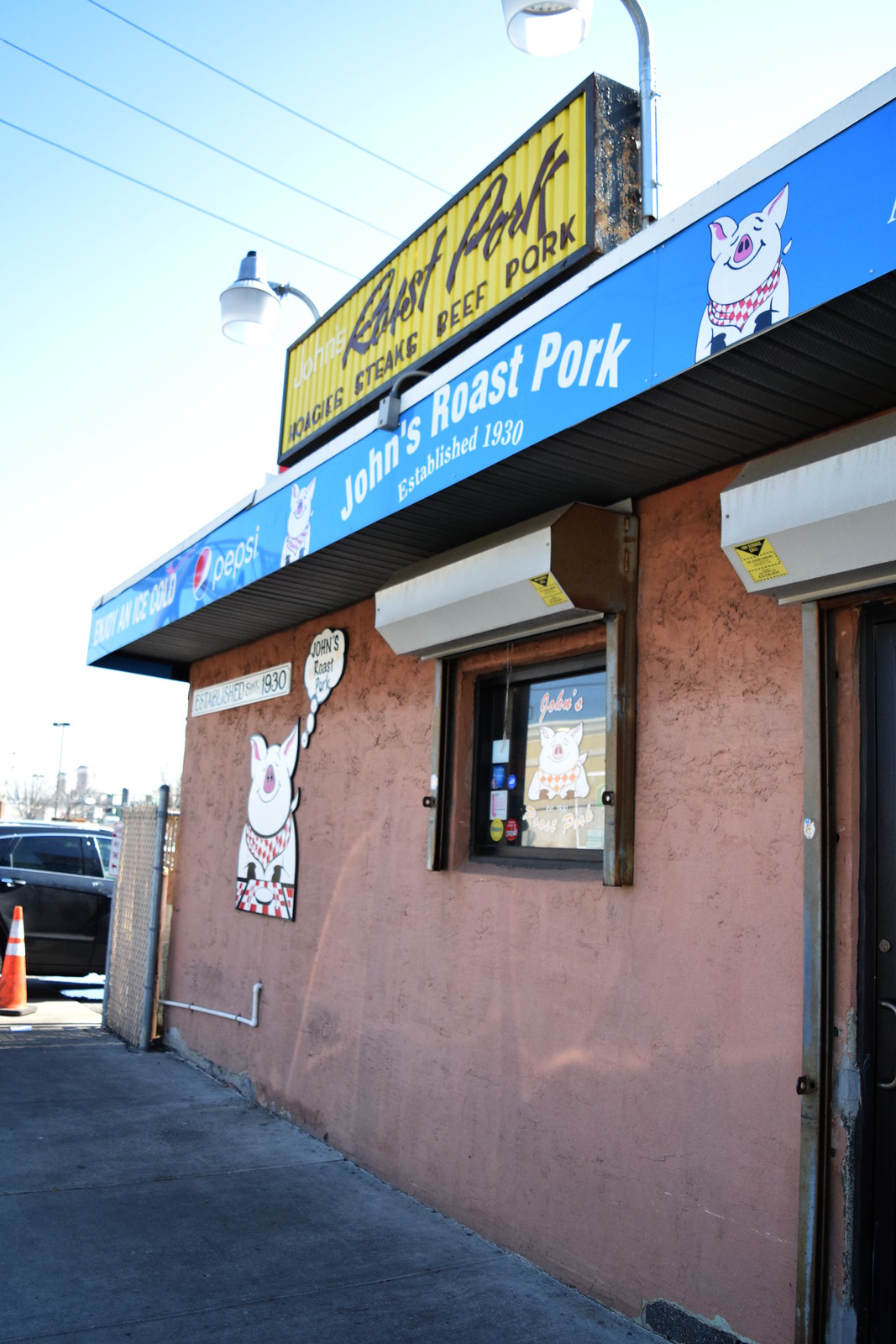 Their main sandwich featured was (not surprisingly) roast pork. What could be even more baffling (to those who don’t know – Philly roast pork usually comes with broccoli rabe), is that this place don’t got no time for no broccoli rabe. They do spinach. Look, I love me some greens, but I’m sorry – broccoli rabe, REALLY? That bitter shit don’t belong with any pork sandwich. I’m not from Philly so I can say this loud and proud – pork sandwiches with sauteed spinach YES. 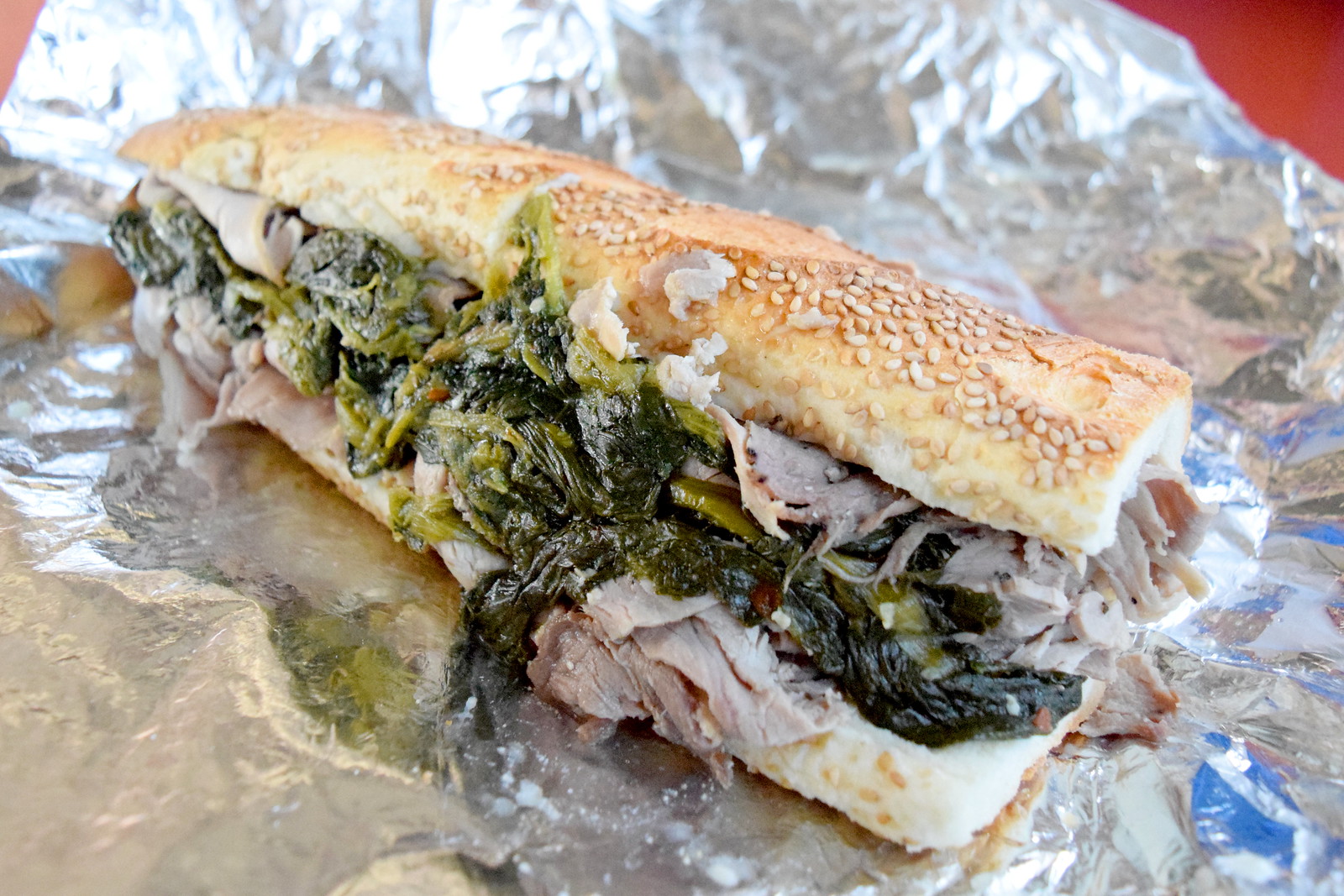 Now, let’s get to the main points… Was it good? FUCK YES. Like, Dinic’s really IS good, but things against Dinic’s was, (1) way too crowded, (2) *personal reason* we didn’t eat it fresh but 5 minutes shouldn’t damper a sammy, (3) meat was much more juicy AF at John’s, and (4) cheese amount. 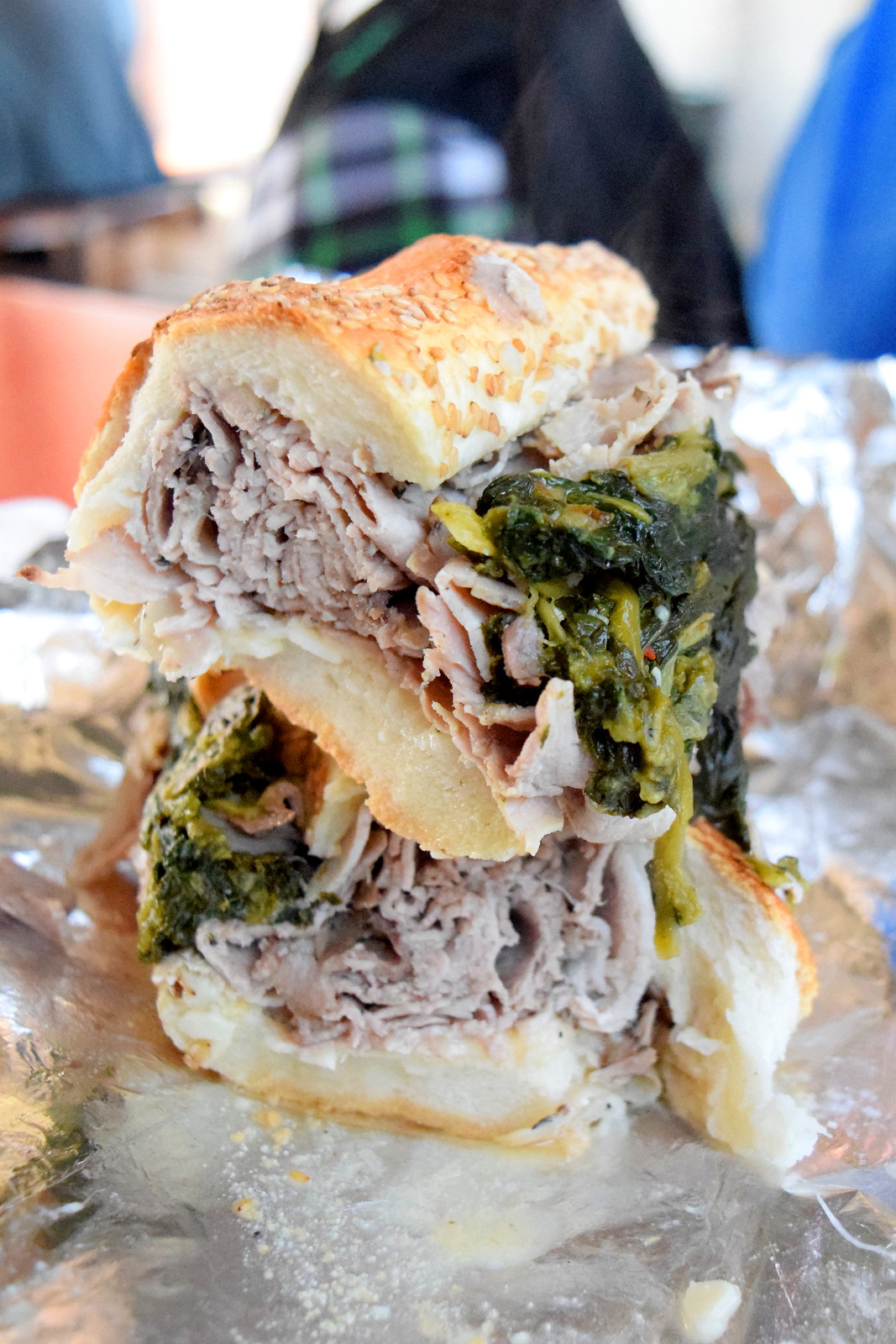 FINE PRINT: NOT open a Sunday!!

Why we saved the most personally recommended cheesesteak spot for the last opportunity, I have no idea. I really should have listened to you guys – I’M SORRY!

When we first walked in, it appeared to be like every other tiny location lacking adequate seating. But upon further examination, there was an entire upstairs! With windows! And they serve local beer! Okay, I’m sold. 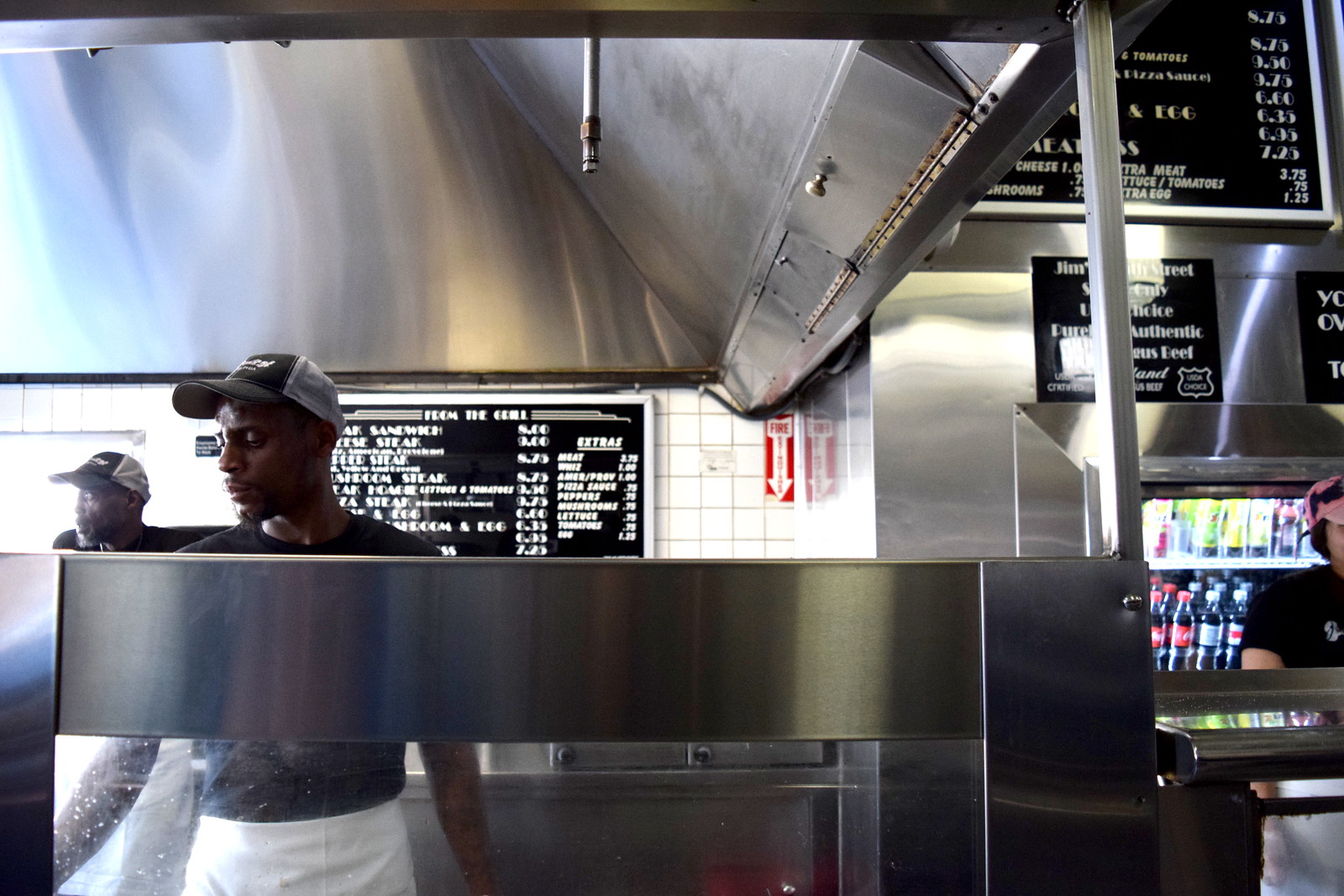 Look, nowhere took credit cards so it’s hard to tell what we really paid – but I’m almost positive a cheesesteak was $9 WITH whiz and WITH onions. Like, can I just get a refund on my Pat’s and Genos’ please? 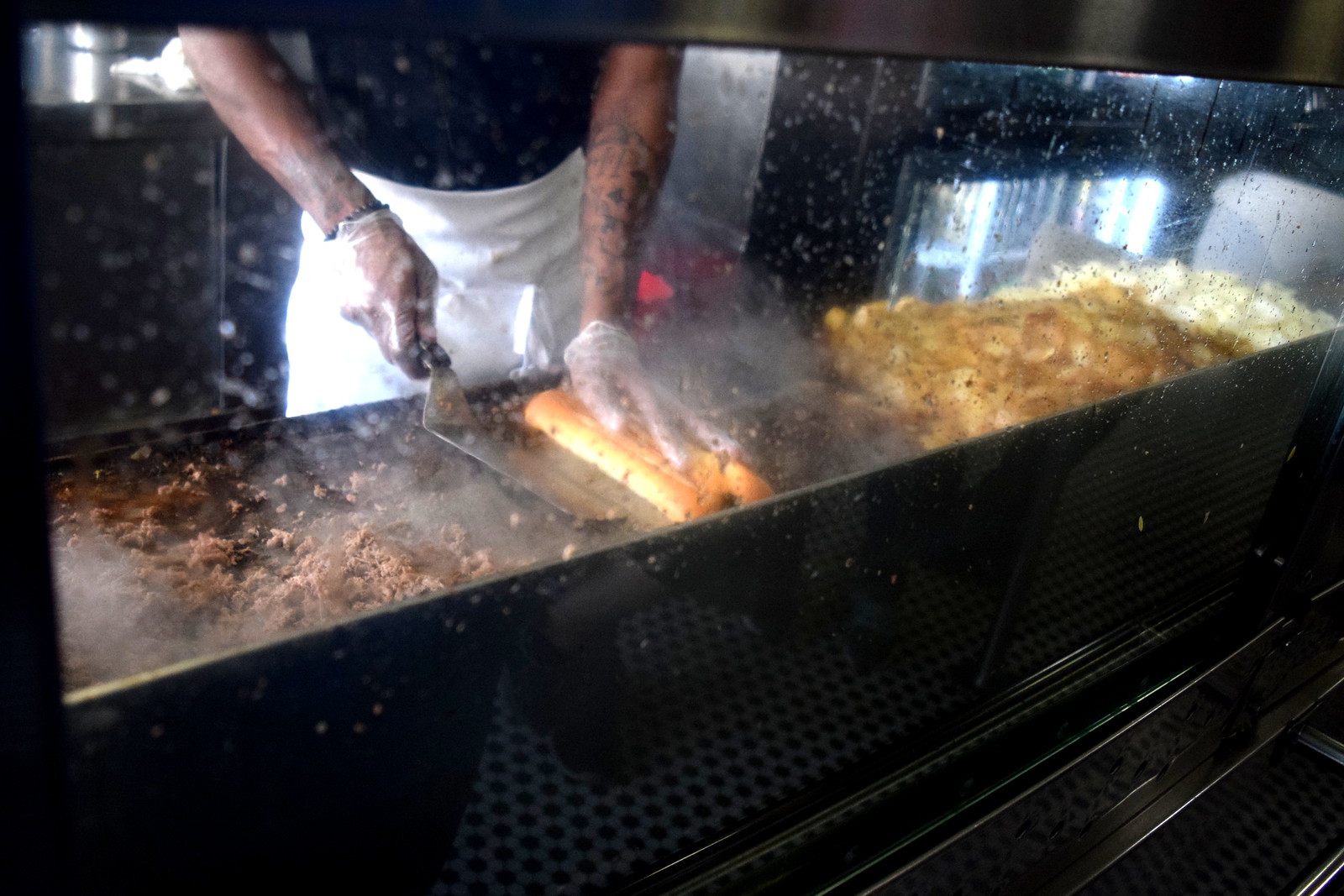 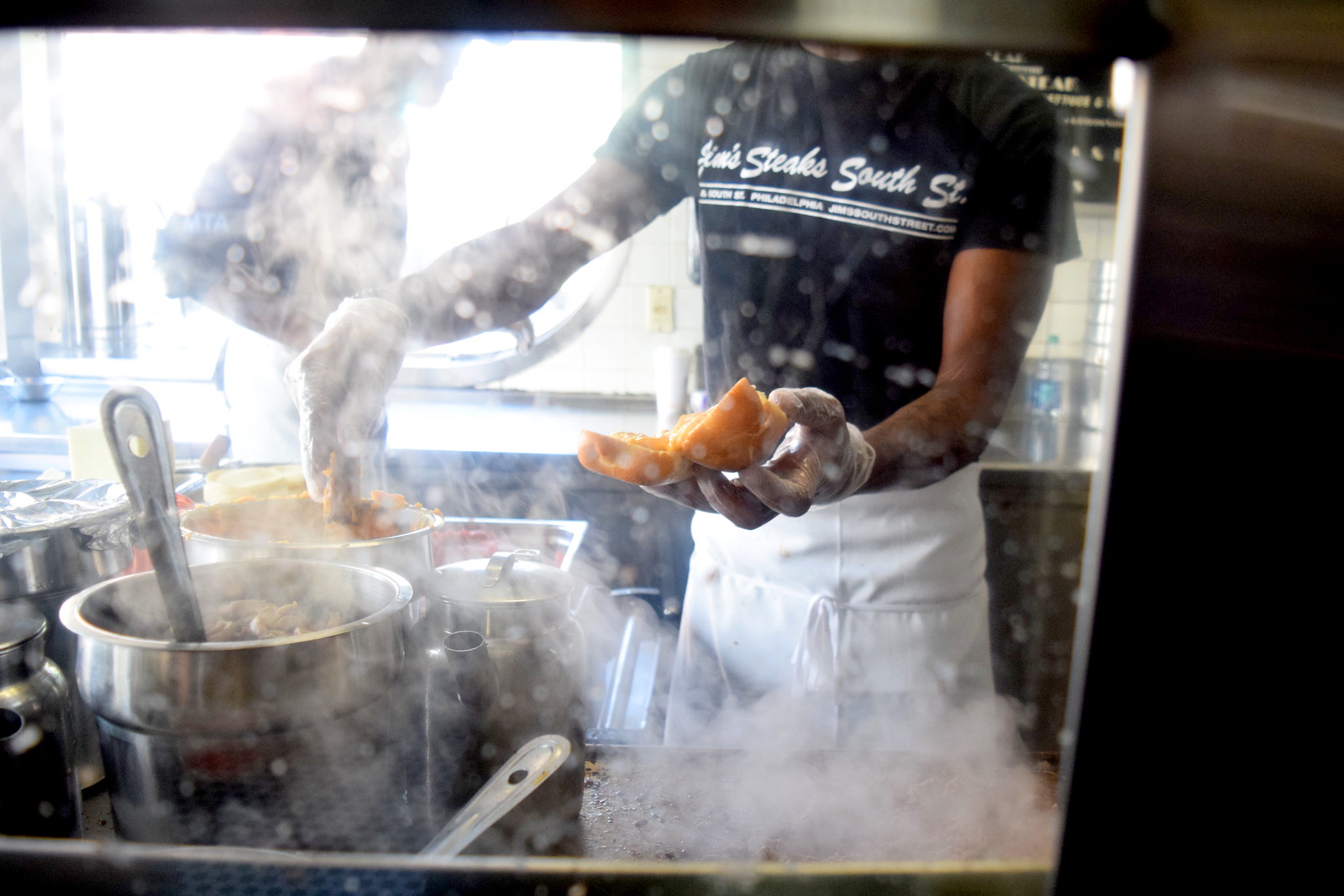 Before even ordering I spent a good amount of time (in a short line) watching them prepare each sandwich so meticulously. I find it so much more appealing watching people make the food versus just ordering blindly behind a counter. 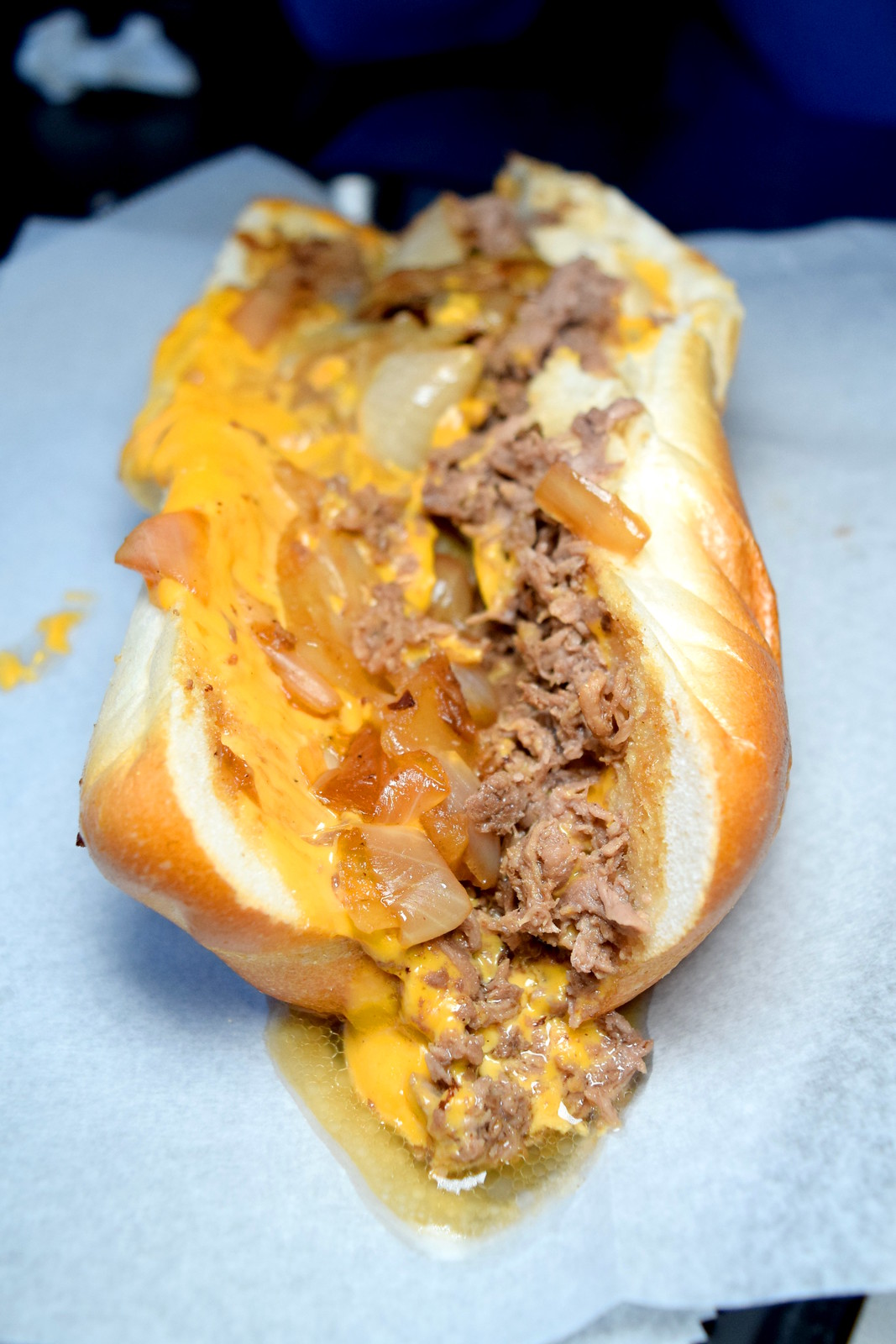 Once our order was ready (just one cheesesteak – cmon now we were full AF) and got a local beer each, we made our way to the upstairs seating with a pretty decent view and tons of windows. I was quite surprised to say the least. But legitimately not even remotely as surprising as how I felt when I took my first bite into this bad boy. OH MY GOD! 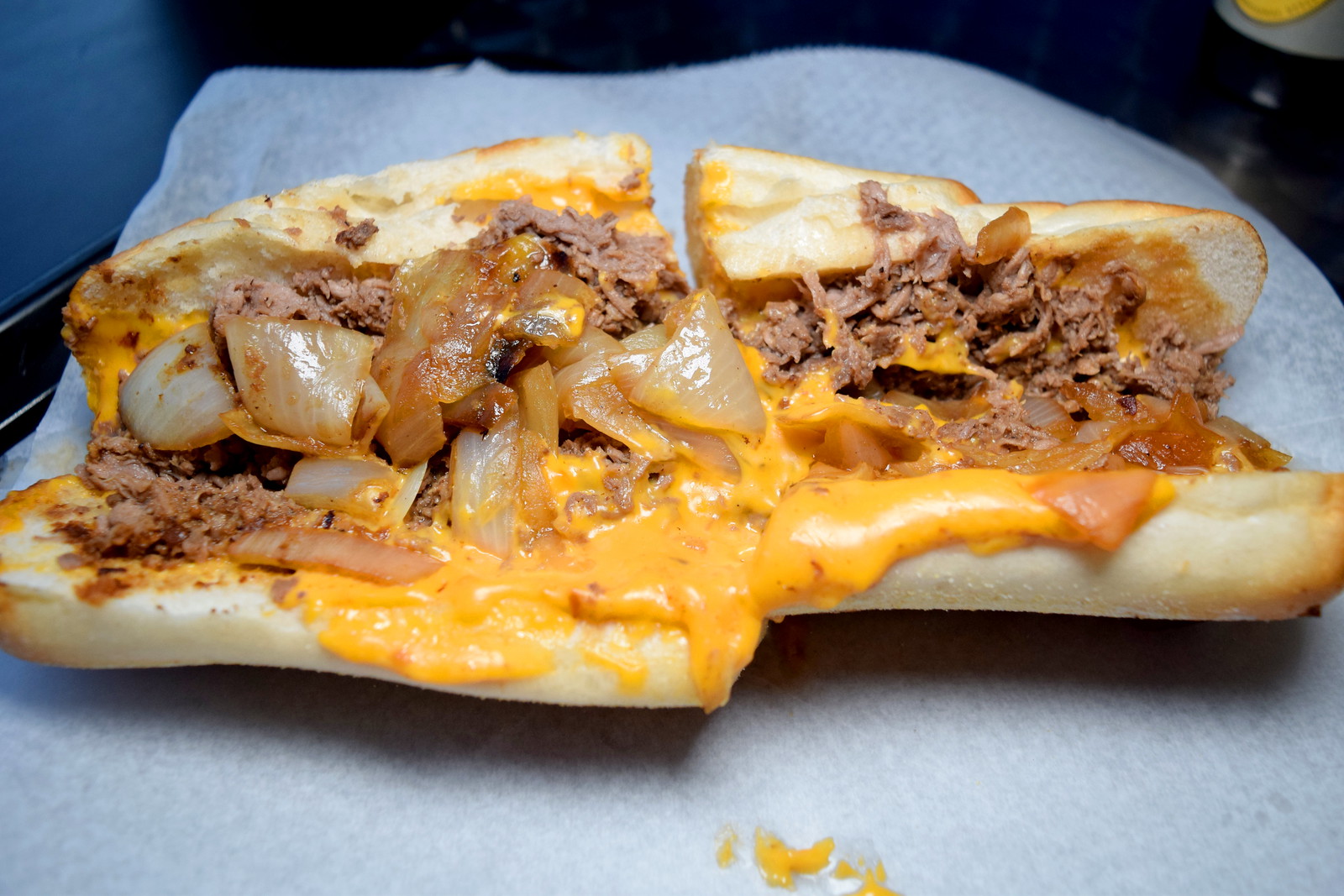 Like, I’m actually kicking myself in the foot right now for wasting calories on Pat’s and Geno’s. This is exactly what I was fucking looking for. A cheesesteak to sweep me off my feet. 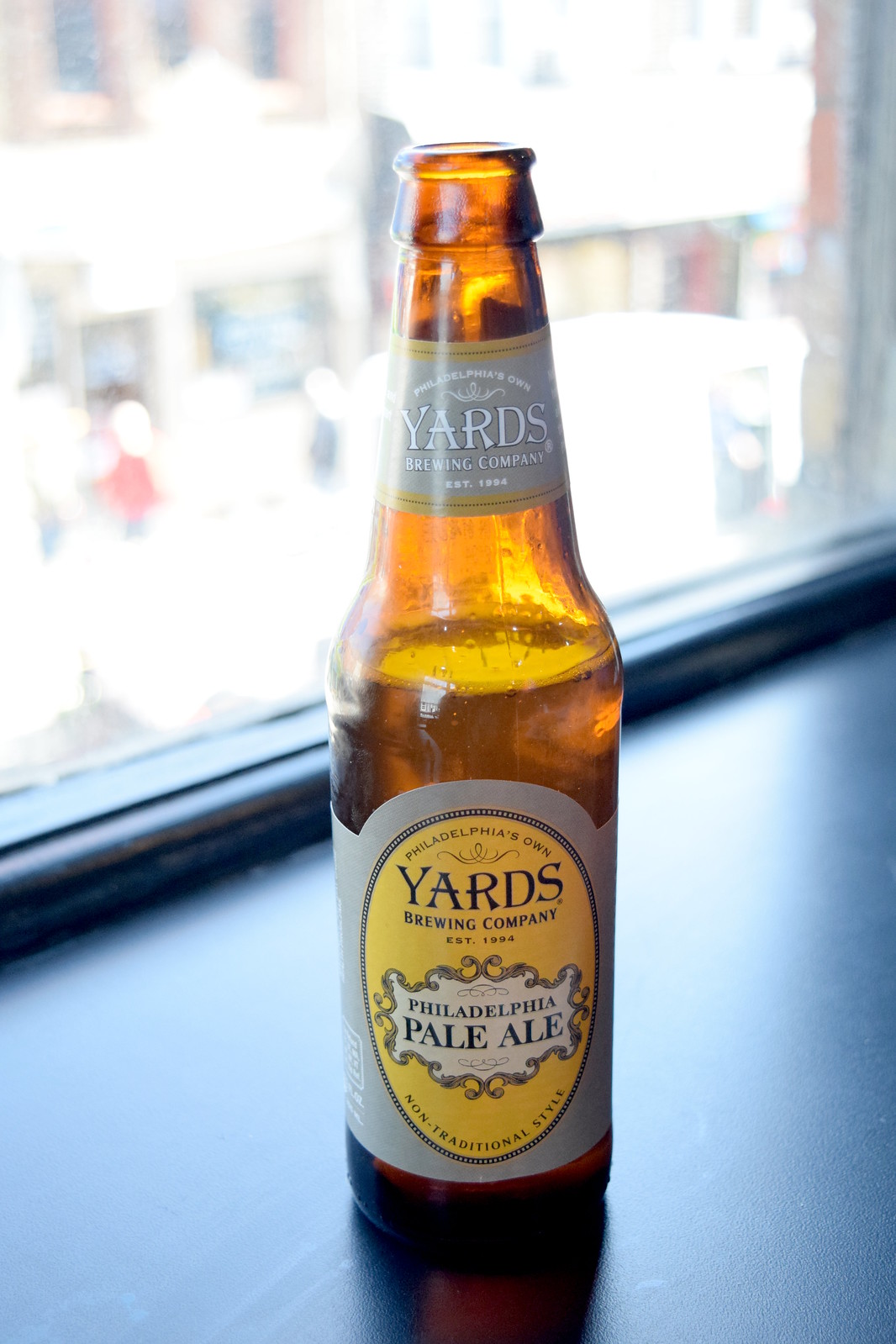 We were so full but so stoked we finally met *the one*, that we finished our beers and wrapped up half the sandwich to take with us on our adventure to go ice skating. Yup, so good, had to bring it ice skating IN MY PURSE (and thereafter back on the Amtrak home to NYC).

As strange at it is (and it’s not purposefully), the ranking goes backwards for us.