Now that it’s October, it has me planning my upcoming 30th birthday this December (Thailand here we come!). It also has me reminiscing my last birthday which we did a little stay-cation in the Lower East Side of Manhattan. So, please forgive me for this late post, but here’s our “travel” post in the LES last Dec 2018.

Located in the heart of the LES in downtown Manhattan is this gorgeous boutique-esque hotel owned by the chain Hotel Indigo. The check-in area is on the second floor and flooded with floor to ceiling windows facing the skyscrapers of midtown.

Once checked into our room, we were greeted with a pretty gorgeous view of downtown Manhattan (that’s One World Trade!) on this pretty gloomy day. Again, this was mid-December so actually not too bad in terms of weather. 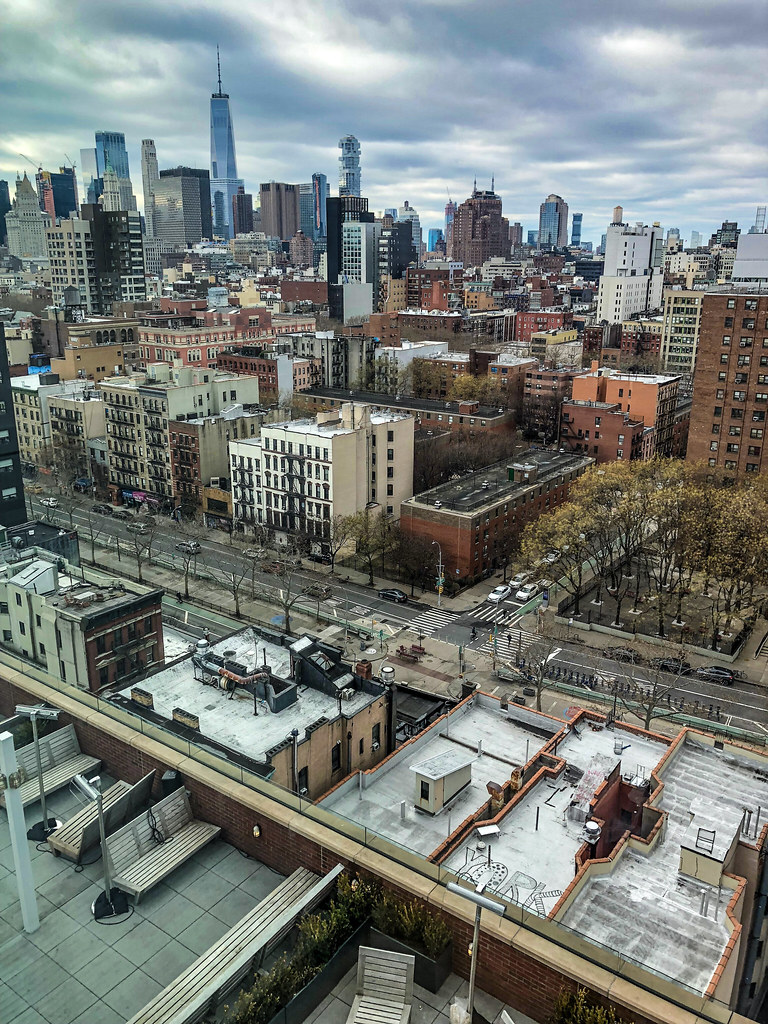 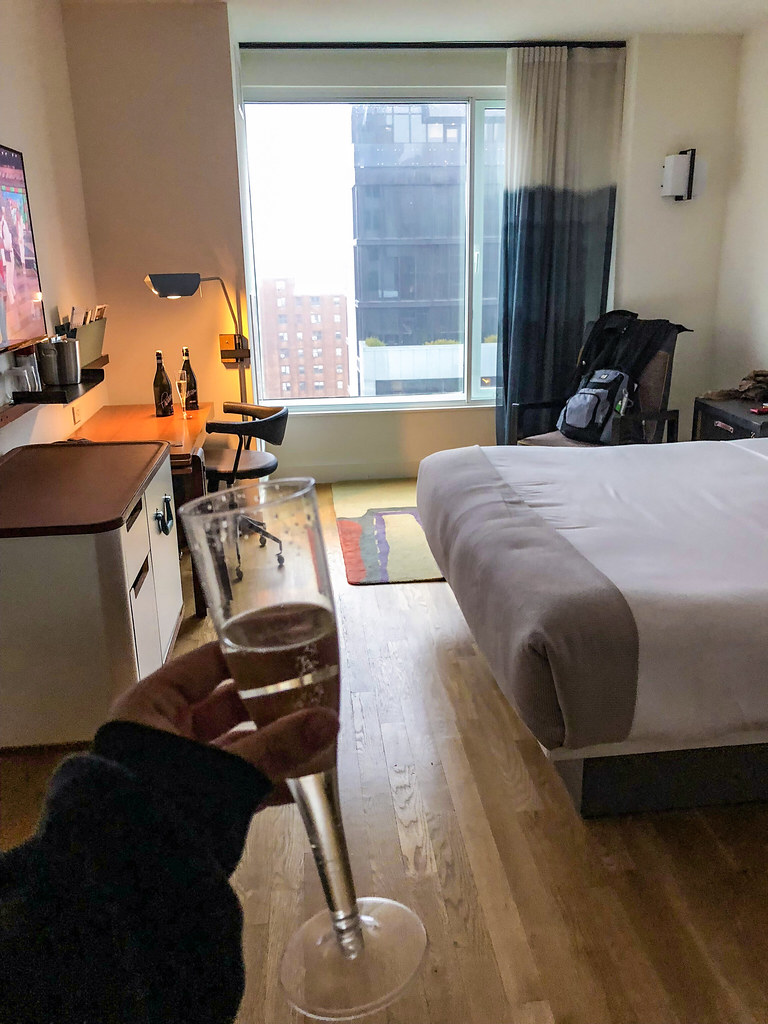 Stephen popped off some bubbly as we got ready to head out and explore the area. We were only spending 1 night here but definitely looking to make the most of our time.

Izakayas are known for being informal Japanese pubs, where Japanese men used to stop by after work for drinks and snacks. The food is typically laid-back and this resurgence of them here in the US is definitely up my alley. Which is why we were really happy we stumbled upon Izakaya Juraku right outside of our hotel. 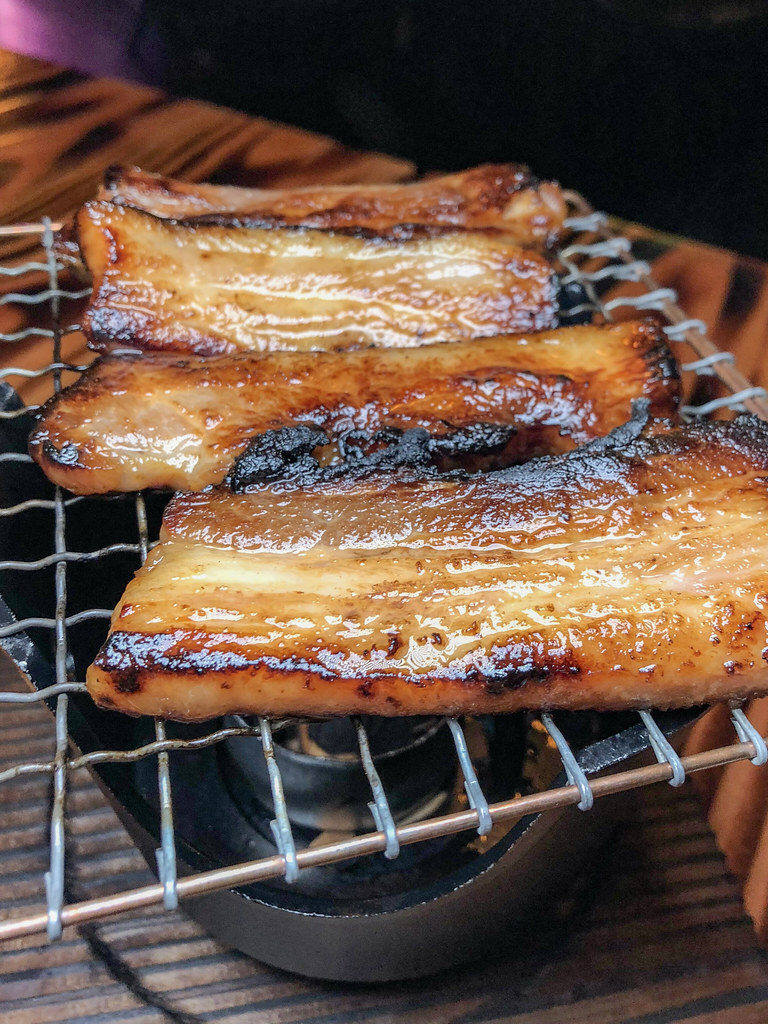 This restaurant has a whole section on skewer dishes that are grilled on their custom lava rock grill. We ordered the pork belly option, and it was plated beautifully on this wire rack above a lit fire. The belly wasn’t too thick, so the pieces weren’t too fatty, and the char was perfect. 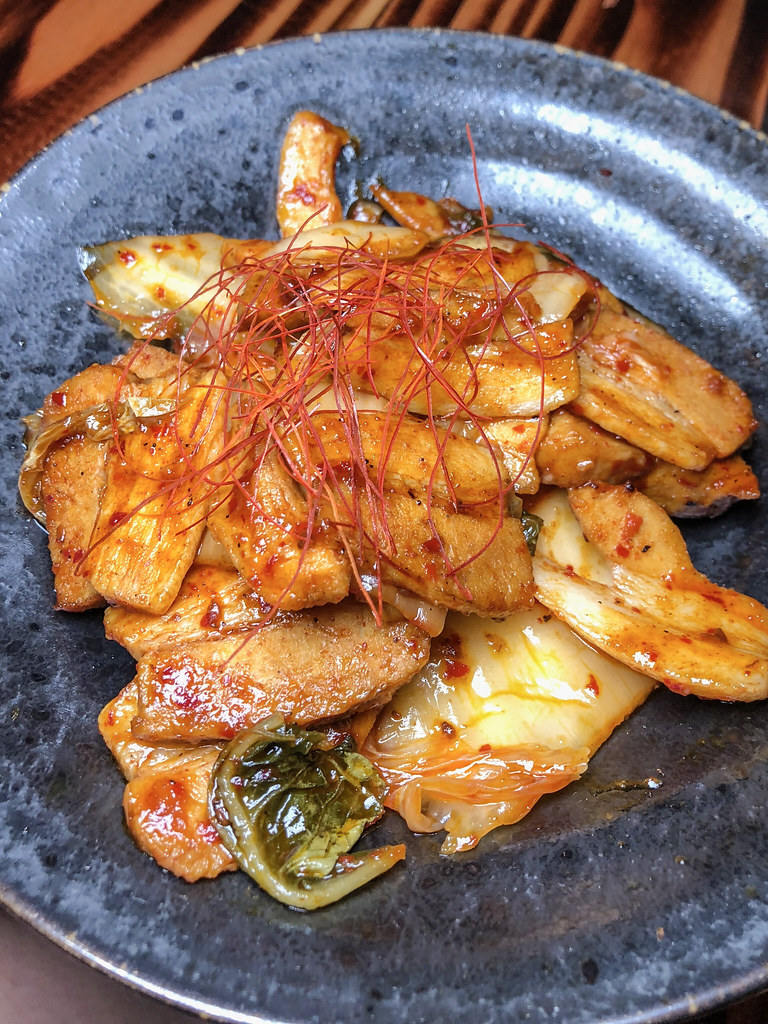 This Buta Kimchi was off their special menu, which was their take on classic dishes. It was sliced pork belly sauteed with kimchi topped with shredded chili. It was actually a lot better than it sounded. I’ve really never tasted anything like this before and this is something I’d like to try and make at home one day. 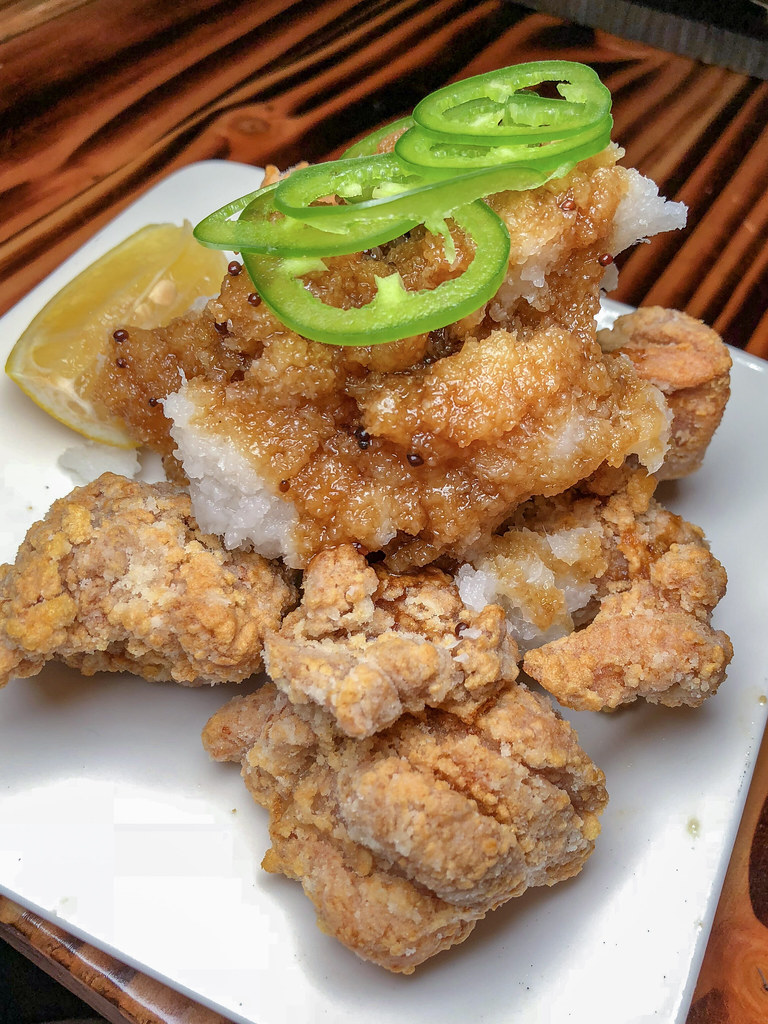 I’ve always been a fan of kara-age, but this Oroshi Kara-age was very different than what I’ve been used to. It’s Japanese fried chicken thighs topped with grated daikon, chopped scallion, shredded chili pepper and homemade ponzu sauce. The chicken was fried exceptionally, but not sure how I felt about the grated daikon.

We didn’t just stop at the Izakaya – oh no. This was MY birthday celebration and we won’t stop eating until I say we can. 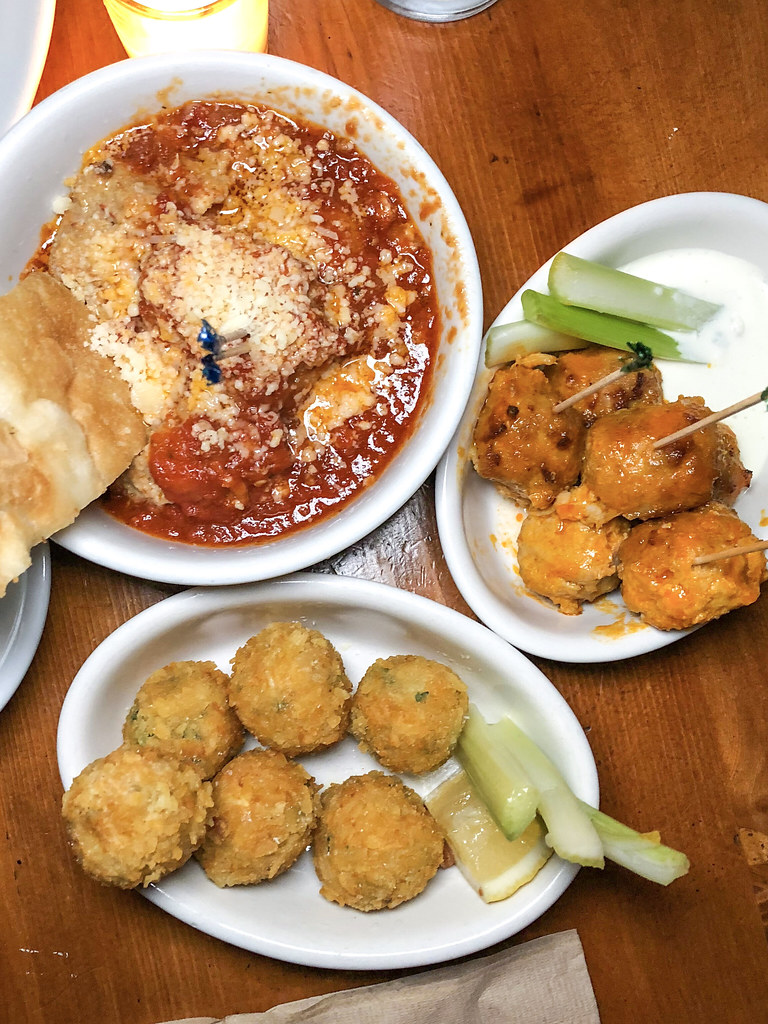 I spoke about wanting to go to the Meatball Shop to Stephen quite a few times throughout the years that I never would have thought this would come to fruition. 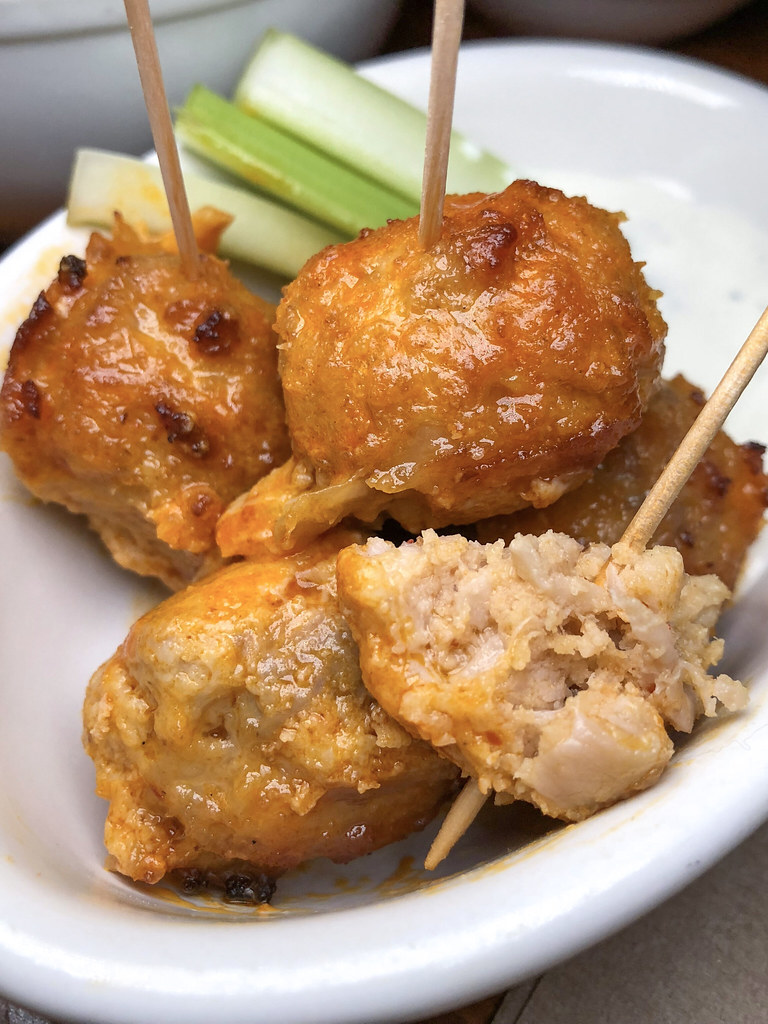 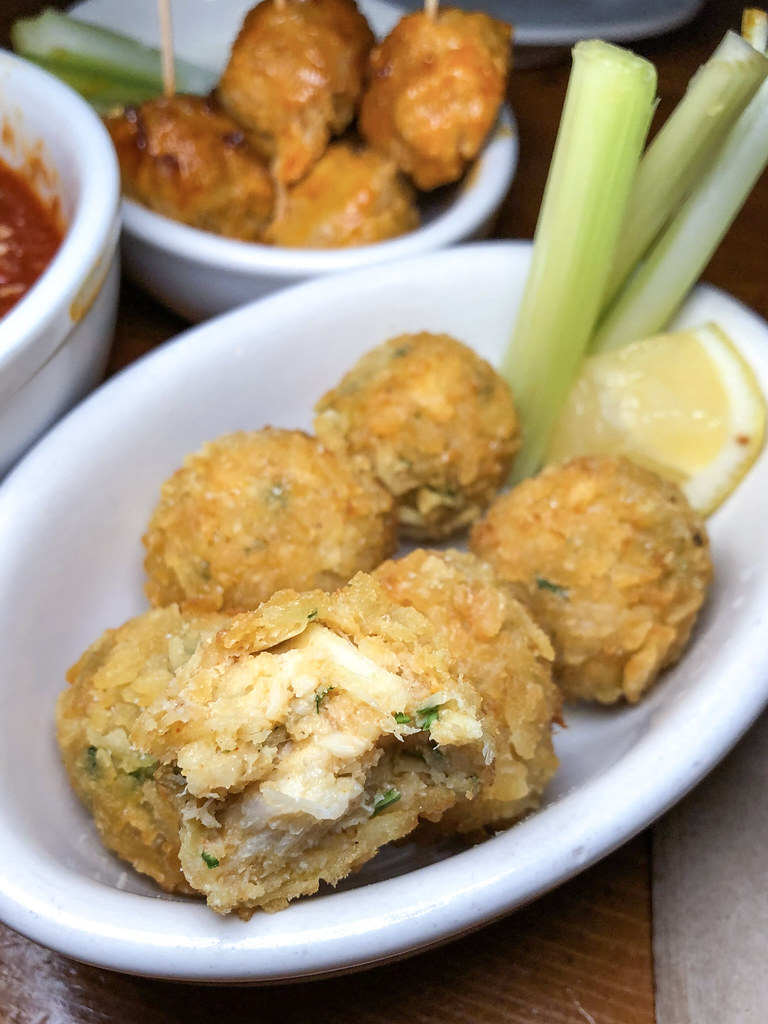 But there we were – stumbled upon a pretty packed Meatball Shop (my worst nightmare) and nowhere to sit. Luckily a couple got up and left abruptly and we took both of their window-facing high-tops. A waiter came over promptly and we ordered the mini buffalo chicken balls and crab cakes ball separately. The buffalo balls were doused in Frank’s Red Hot and came with a bleu cheese dressing, and the crab cakes had a salt and vinegar potato chip crust with a side of Old Bay aioli. 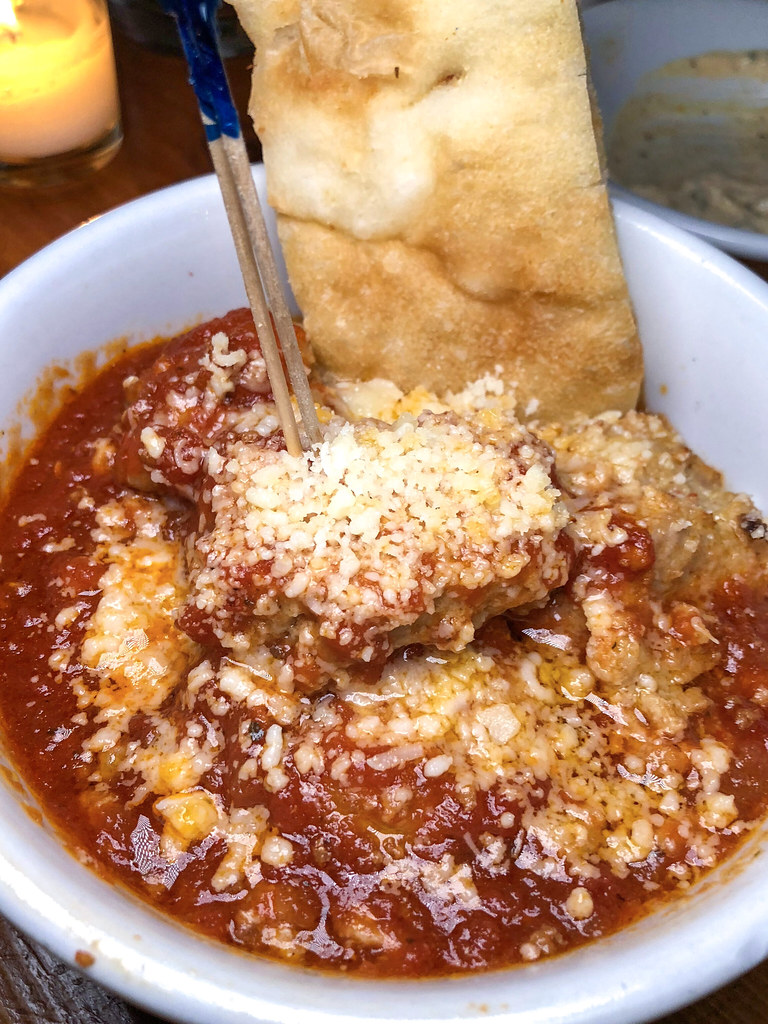 Both balls were tasty. Even this classic meatball bowl with a spicy meat sauce. The smaller portions allowed us to try a bunch of different types of meatballs and flavors.

We spent the rest of the evening bouncing around to different bars in the area. Definitely a fun and lively neighborhood; somewhere we could only wish we could afford to live one day. 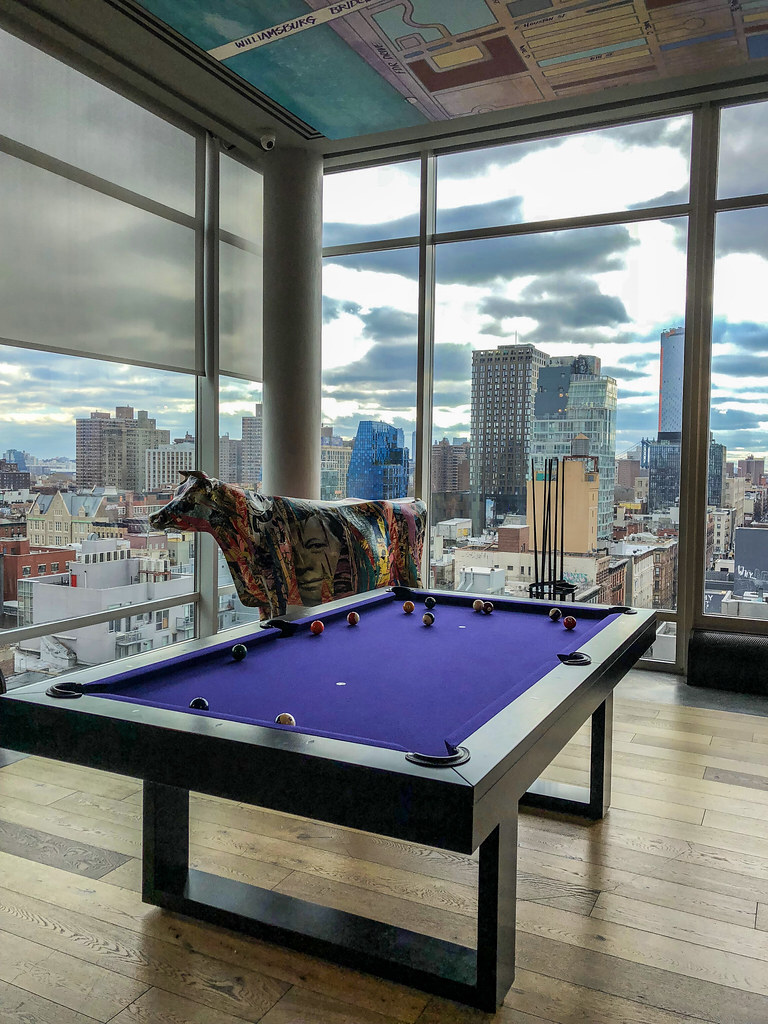 Checking out was a little hard, especially with this view. Luckily the hotel has a great baggage holding area so we could still finish exploring the area. 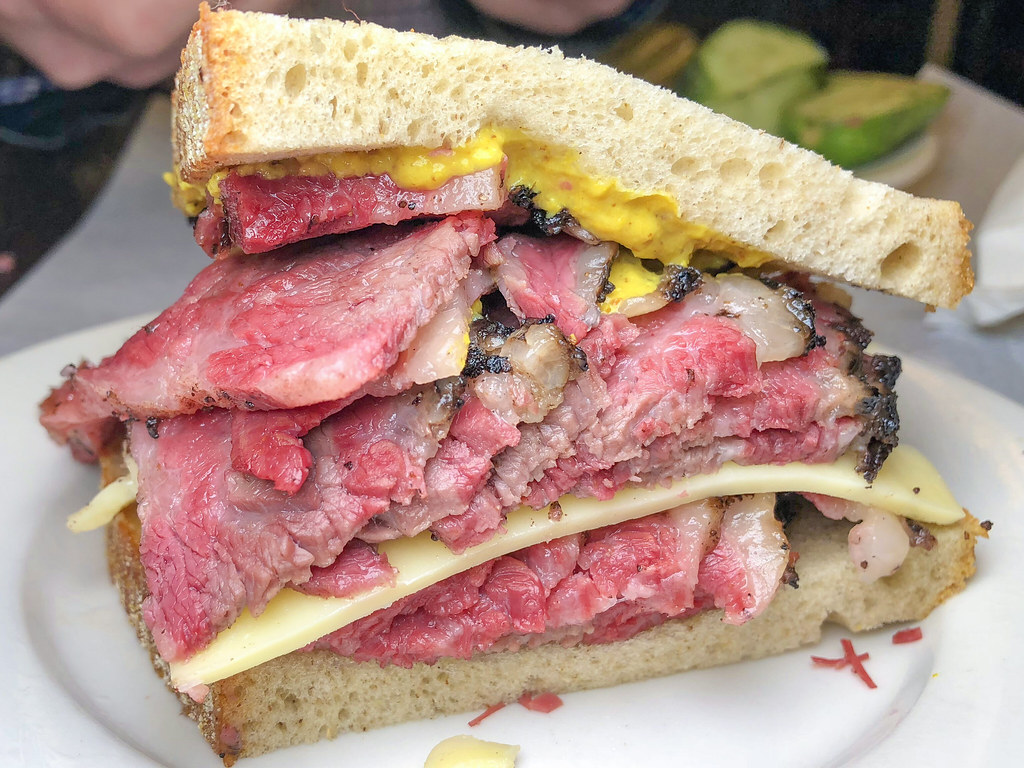 For whatever reason, Stephen, who was born and raised on Long Island and not far from NYC, had never ate at Katz Deli. Well, he sure was in for a big treat. The obligatory line-waiting process was also part of his initiation. Luckily it was less than a half hour in the line, and the temperature not too unbearable. 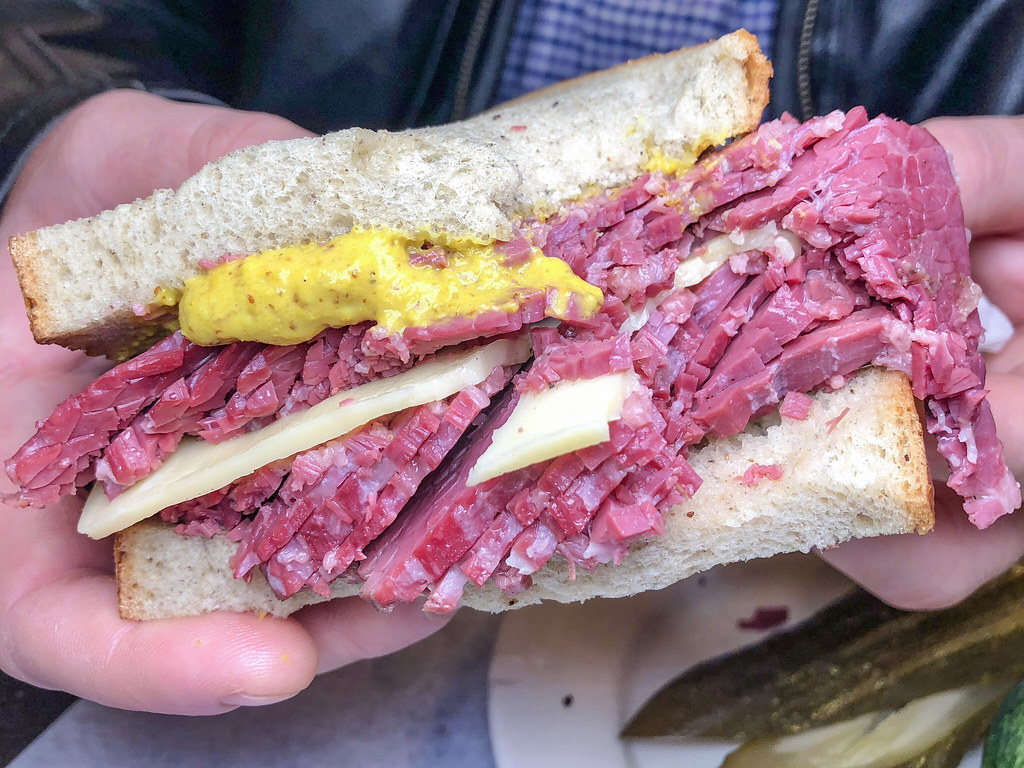 We ordered half pastrami and half corned beef, because those are the classics. And of course, because one full sandwich is not only massive but also quite pricey. Stephen jumped the gun and ordered his first sandwich with cheese, which I loved but I know some Jewish grandma is rolling over in her grave as we speak. 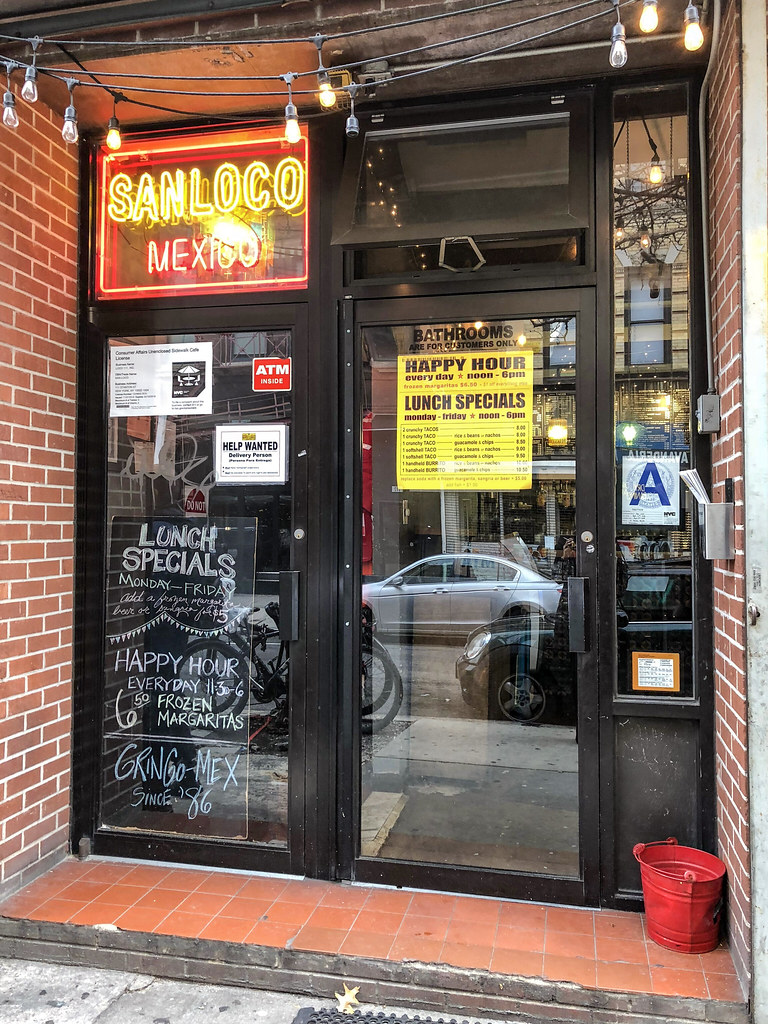 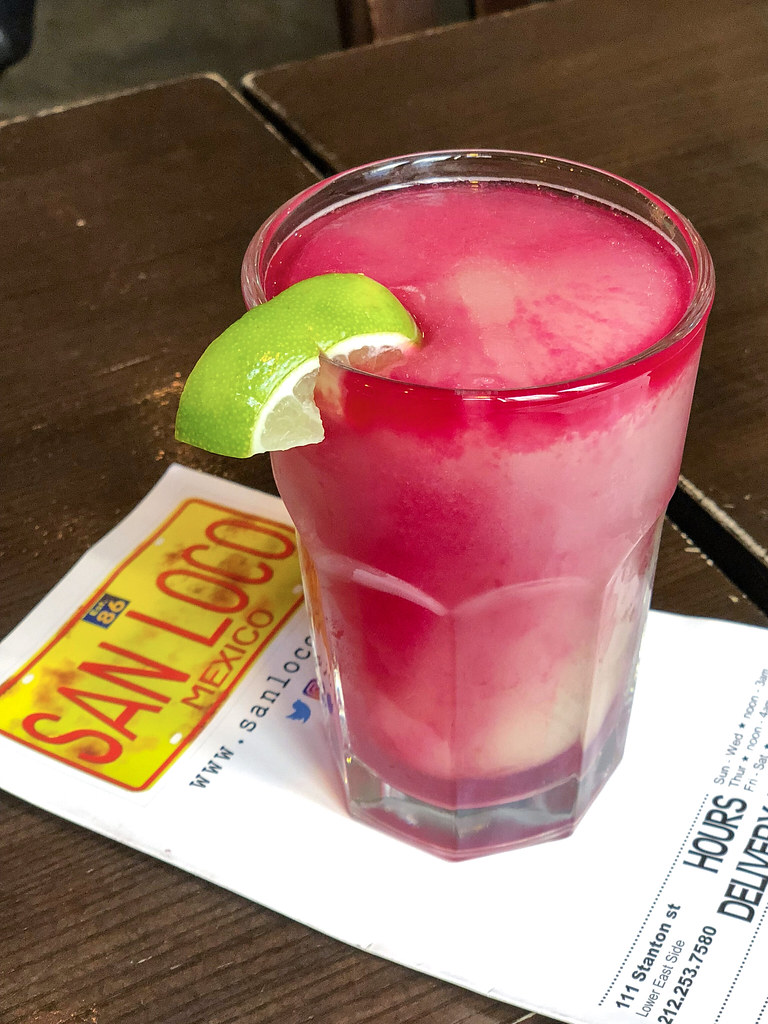 There used to be a San Loco on 2nd Ave a few years ago I used to go to every time my cousin came to visit because their frozen margaritas were out of this world! Unfortunately that location closed, so I was pretty happy to see one downtown not far from our hotel. We had to stop in so I could reminisce with a frozen cactus-pear margarita. 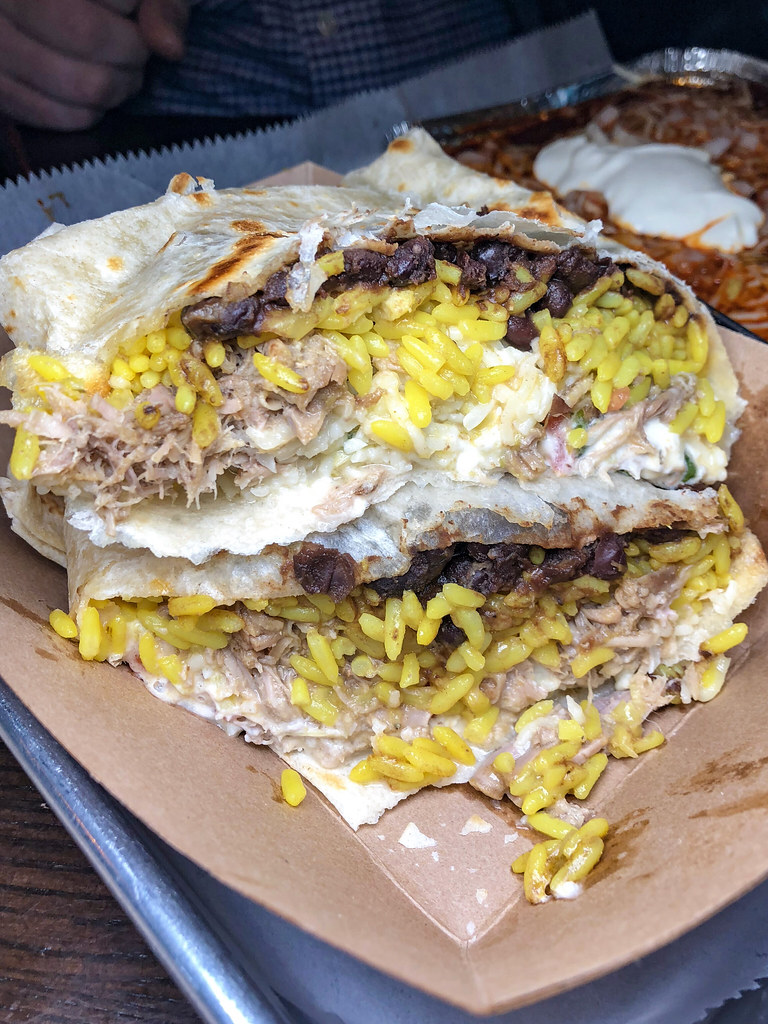 While we were there, we thought we might as well grab some food. Stephen of course ordered a burrito (I believe this was the pork carnitas). 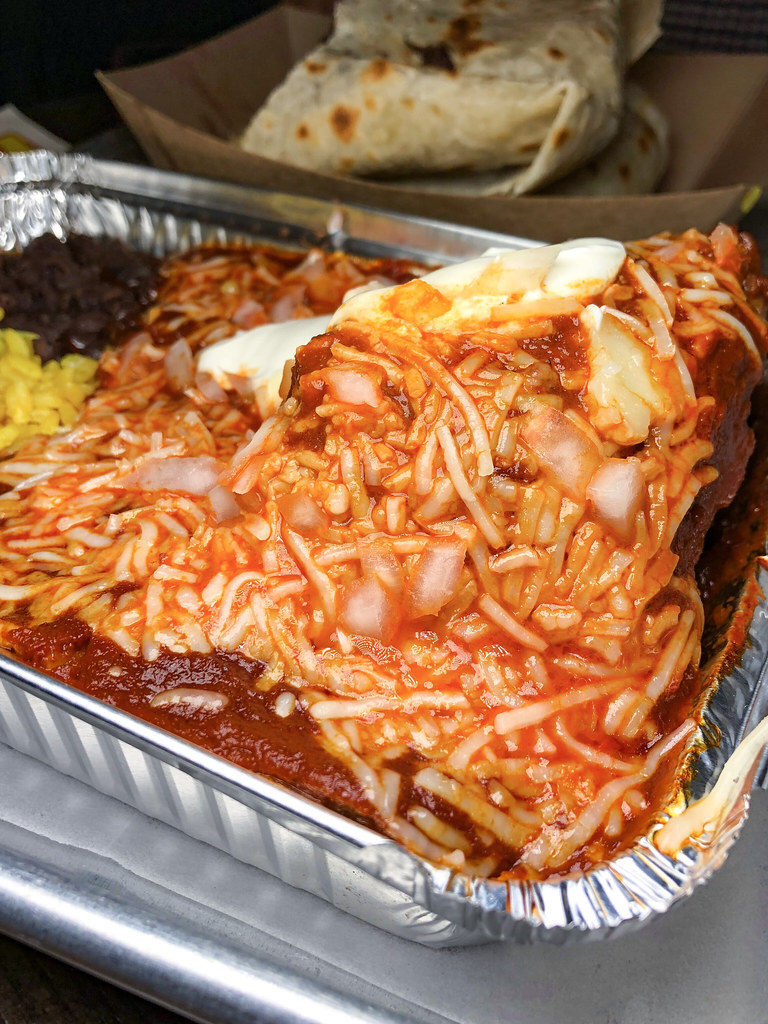 I opted for this massive enchilada smothered in a red sauce and jack cheese. 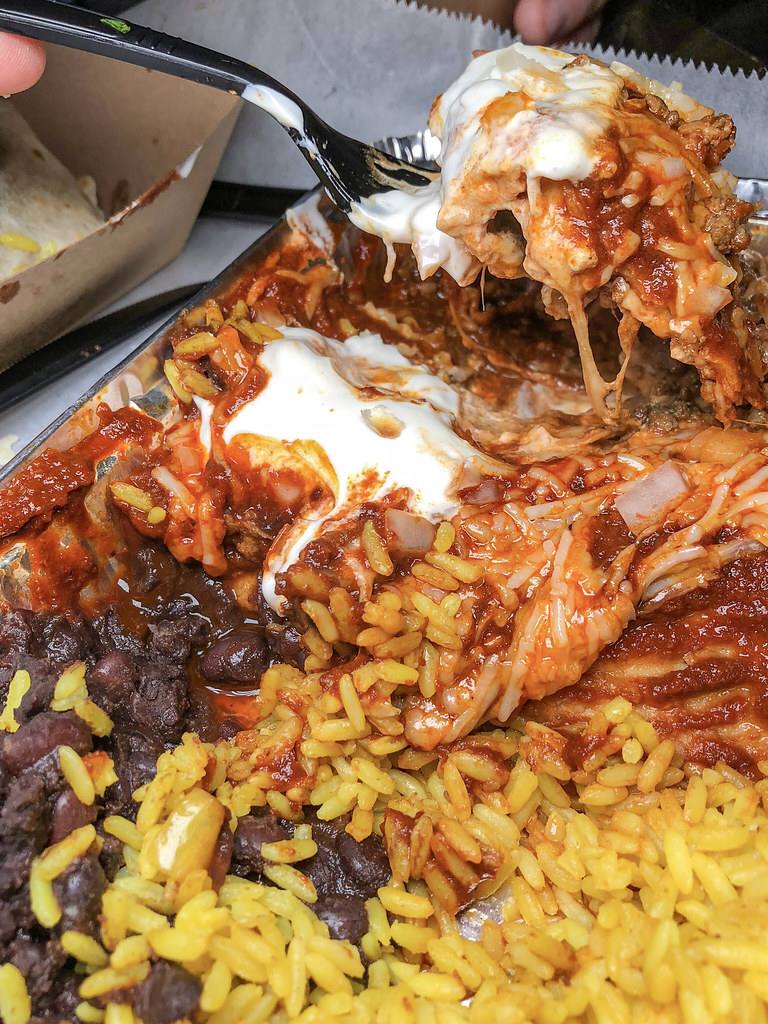 The sauce was flavorful and the tortillas were hearty enough and never became mushy even after reheating it later. The side of rice and beans was appreciated as well. 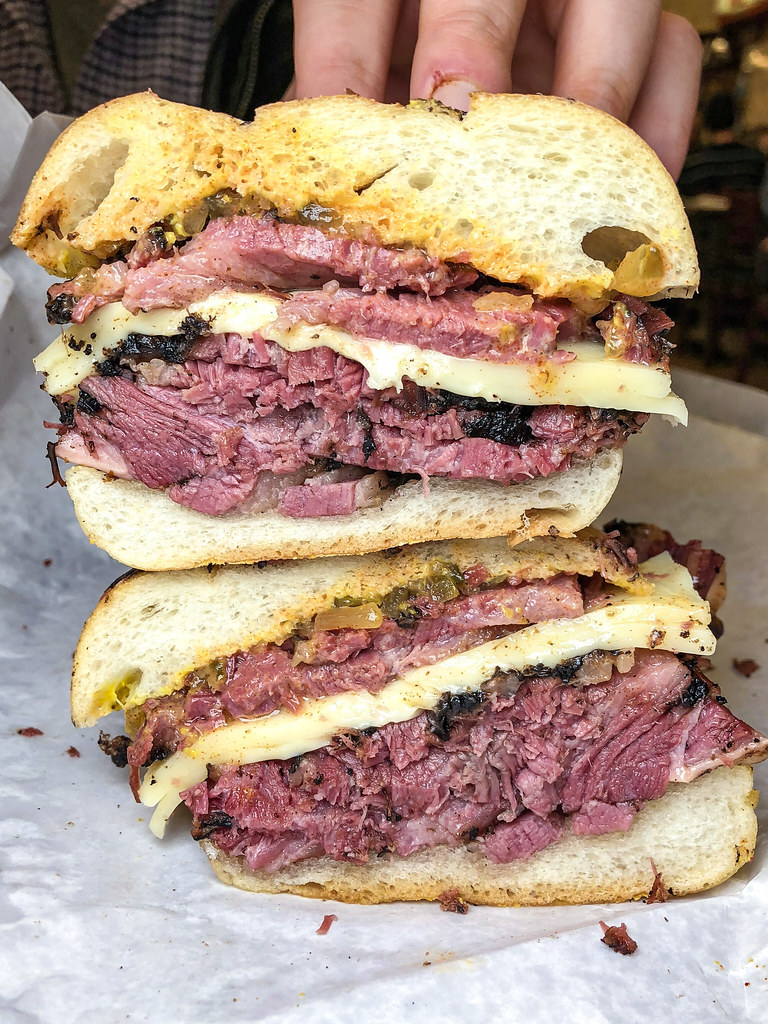 Oh, yeah.. we ended up going back to Katz to grab a sandwich for our ride home. Can’t blame us – it really is that fucking good! To this day Stephen tells me he dreams of their sandwiches. 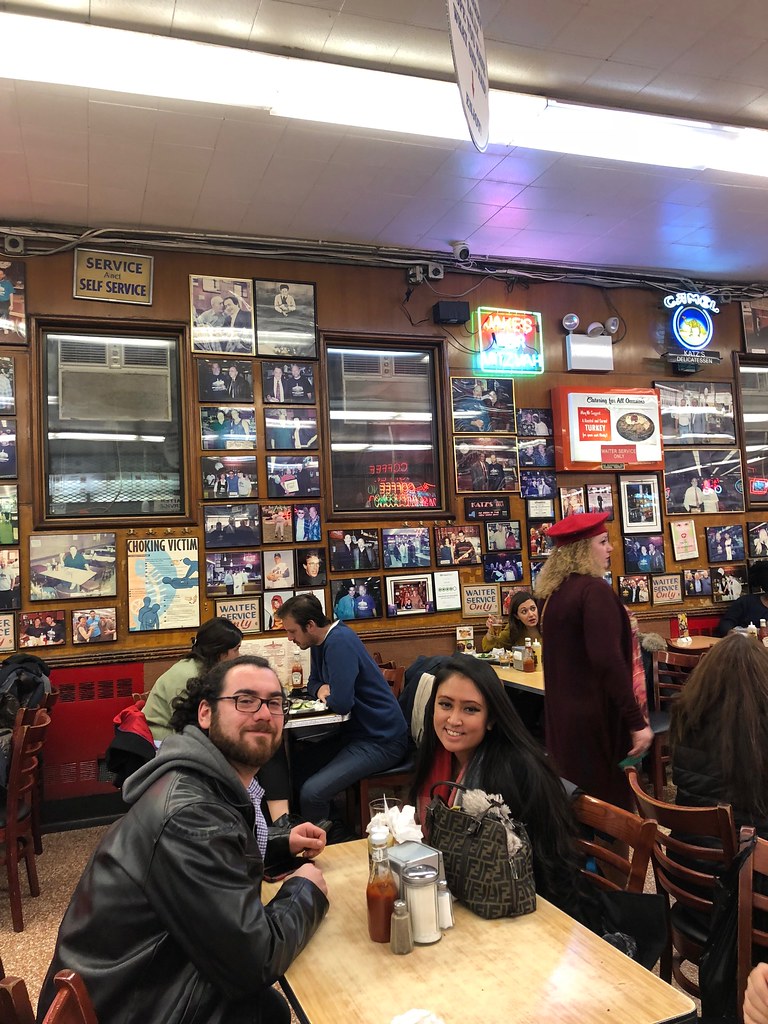 Of course we had to get a pic together at “the seat” (look up). 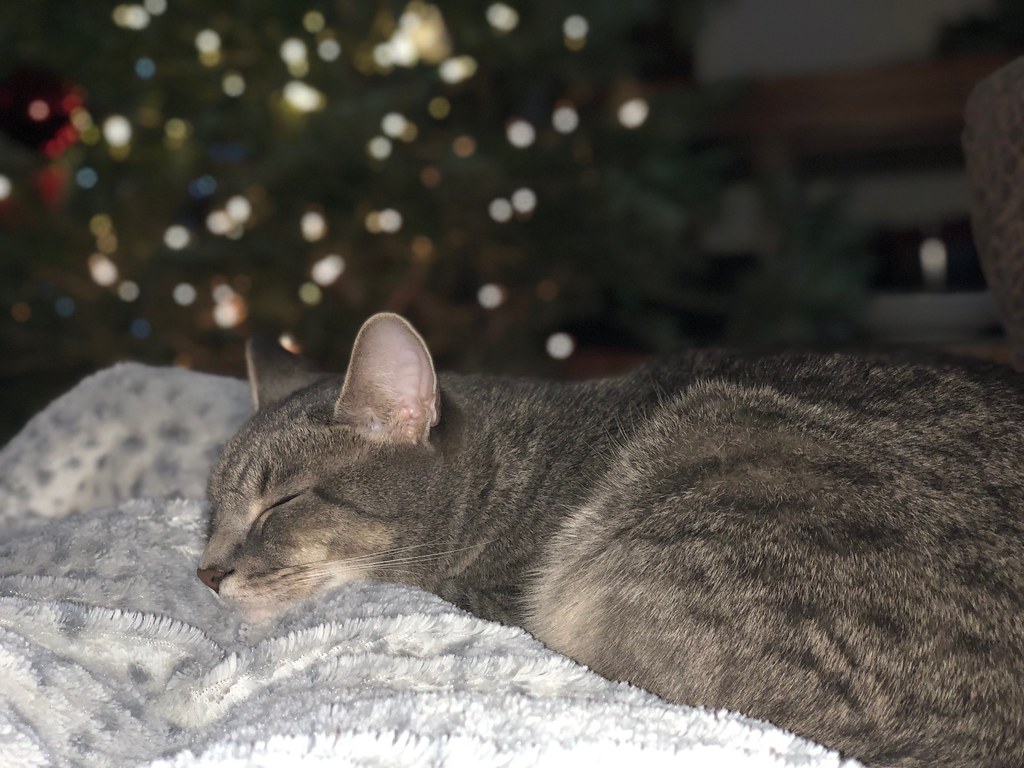 We made it home to our two (one is hiding) sleepy kitties, who were very happy to have us back. Overall a great birthday stay-cation weekend with my love in the city that I love.