Why are people so freaked out by baby octopus photos? I have a few posts on Instagram and people go berzerk with their barfing emojis and stupid ass comments. A few of my favorites are, “eew you can see the tentacles” – which I thought would have been a good thing, or the classic vegan input, “omg how can you kill the babies!?”. Well, Barbara, luckily I bought them pre-killed this time. 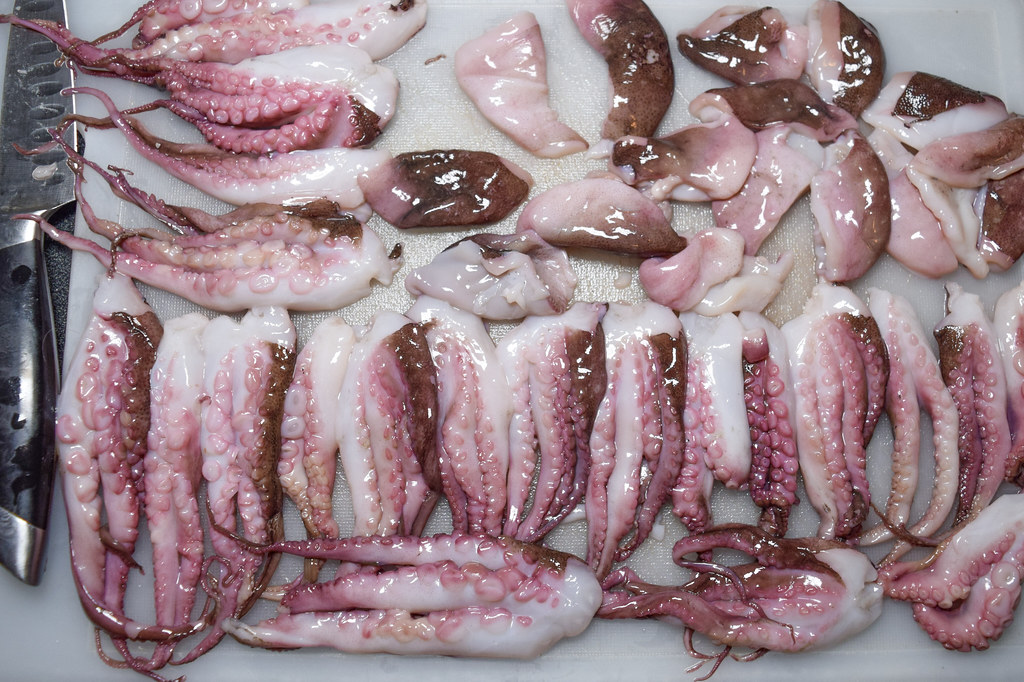 I’m lucky to have a fresh seafood market nearby that sells baby octopus. Obviously if your fishery doesn’t sell these, or even regular octopus, any type of squid or the likes would be comparable. All I do to prep these babies is to cut off their heads (and once again in half), then remove their tiny beaks. The tentacle portion will tightly curl up once heated, so I leave them intact. 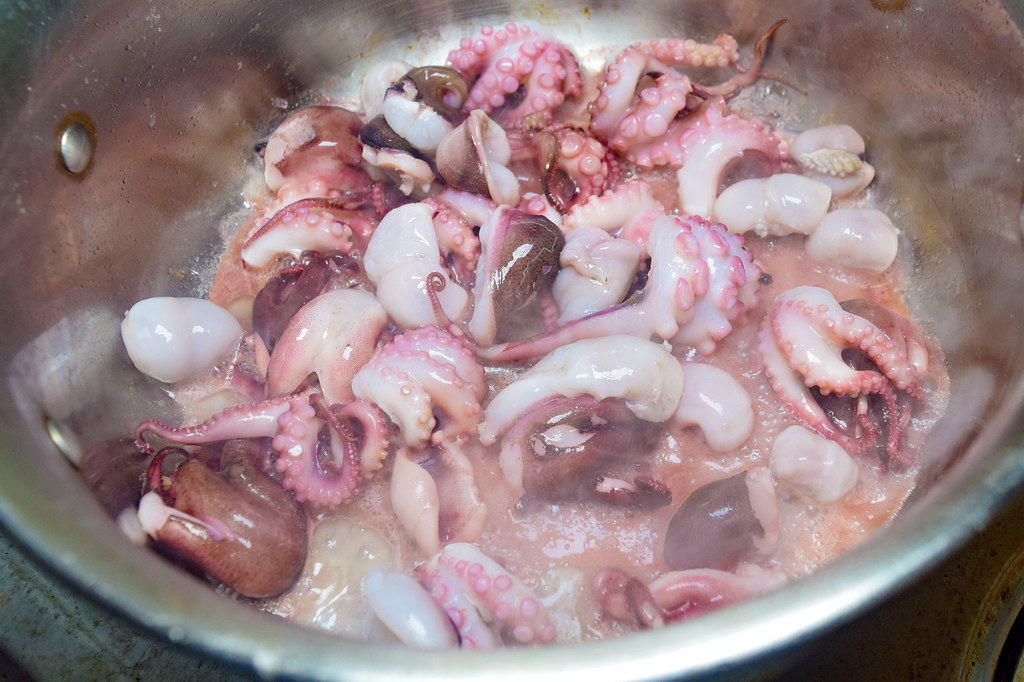 I just love these little guys because they’re so full of flavor. The best description of baby octopus’ flavors is: meaty/salty/briny bursts of the ocean. Essentially the true definition of “chicken of the sea”. Look at how quickly the tentacles start curling up at the slight touch of heat. 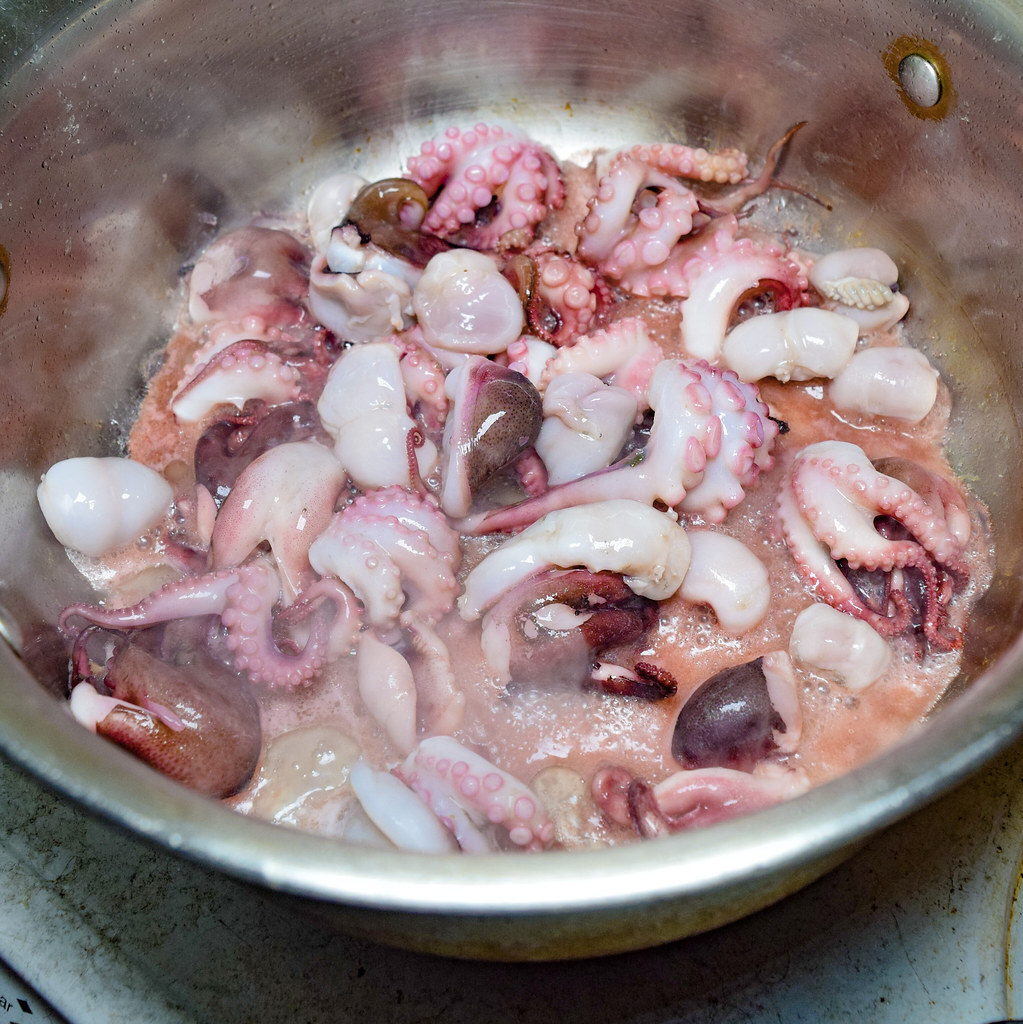 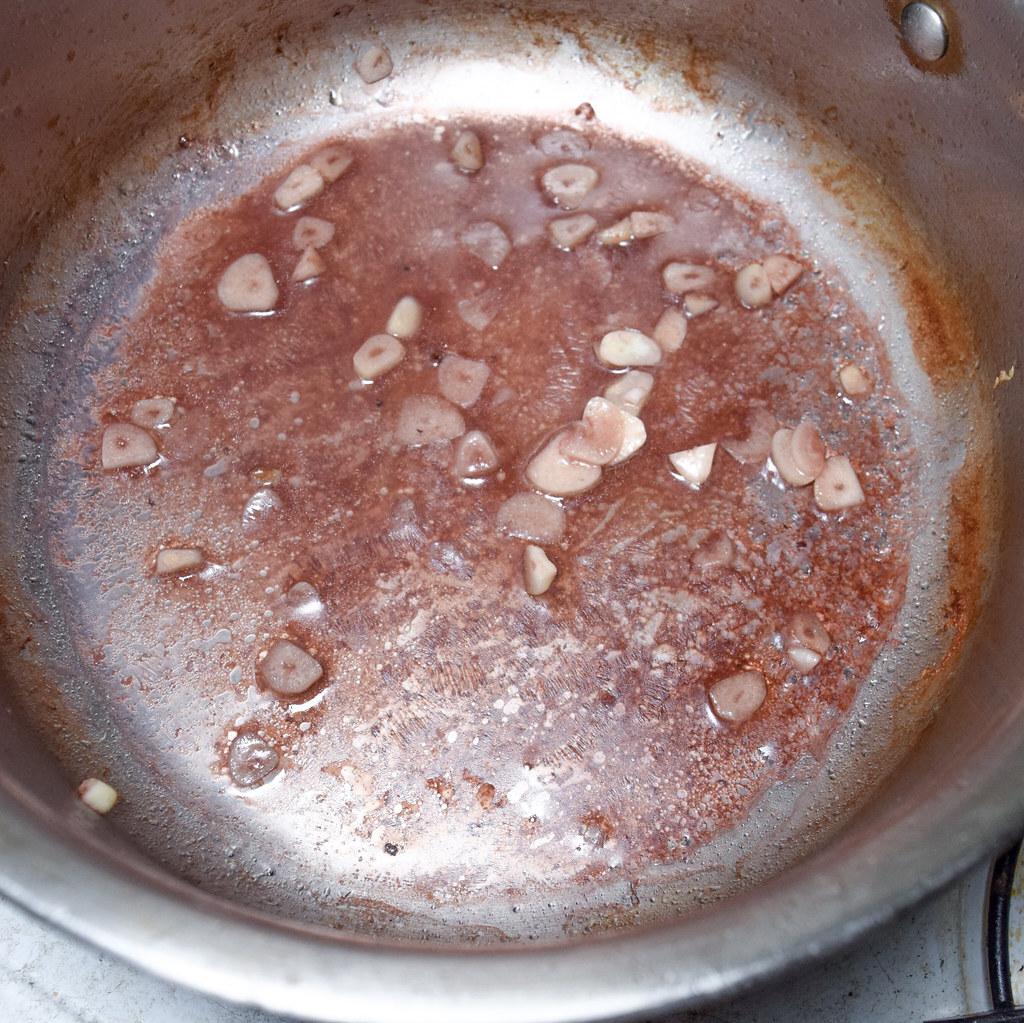 Cooking on medium heat with a slight drizzle of oil, the octopus will turn a bright purple color and release a shit ton of purple liquid. That’s where the goods are at. Remove the octopus pieces and saute some sliced garlic in the juice.

Separately, you should be checking if your pasta is ready. Once al dente, take a coffee mug (or about 2 cups) worth of pasta cooking-liquid out and leave to the side before draining pasta. 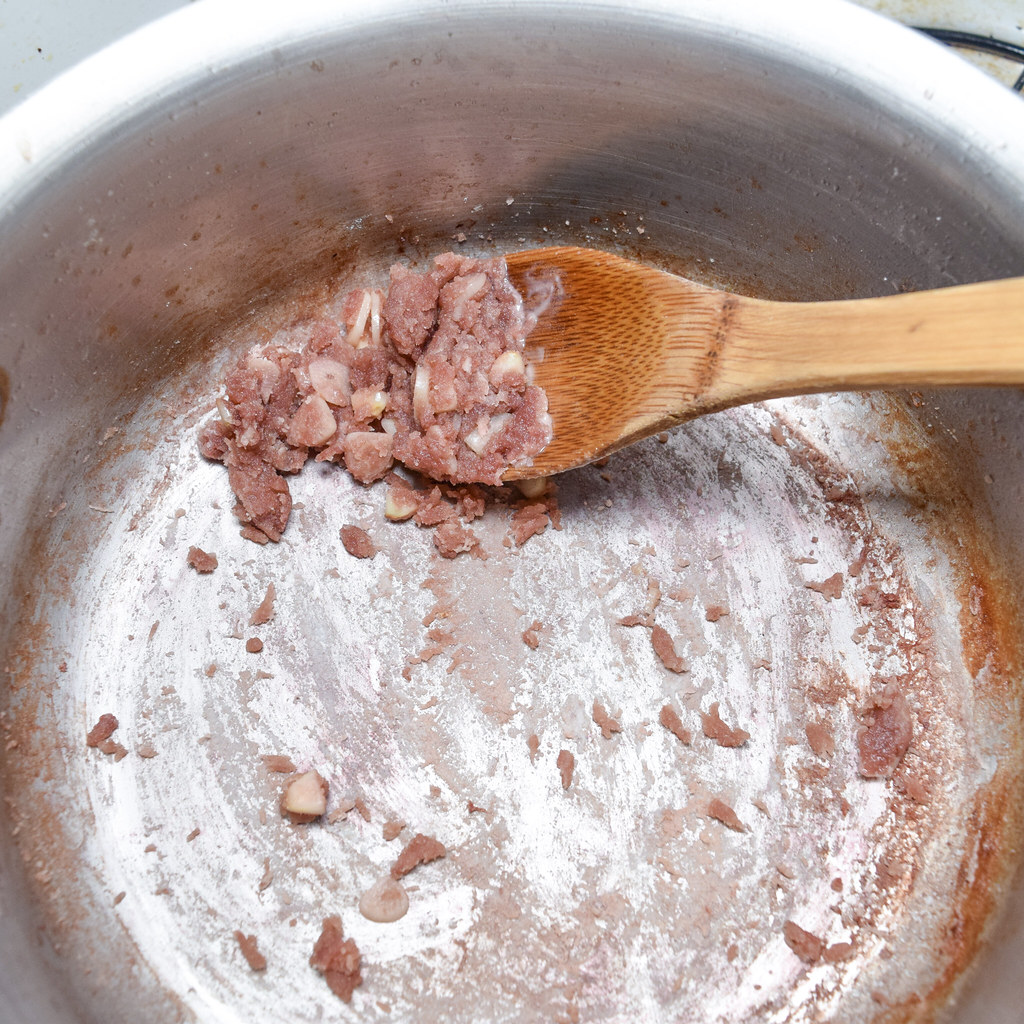 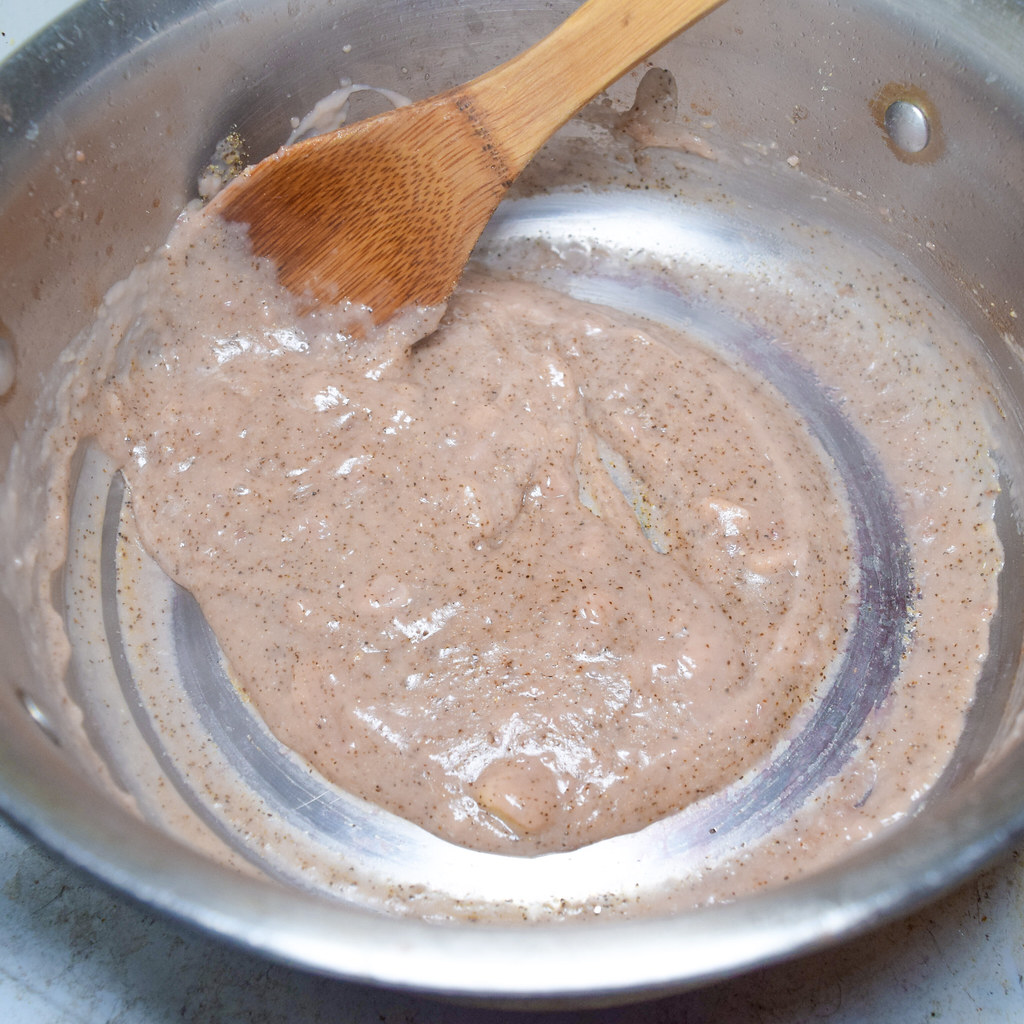 On low heat, pour in just a few spoons of flour into the octopus juice until it clumps up like the left photo. The roux is going to form from the slight amount of oil, but mostly from the secreted octopus juice. Then, slowly pour the saved pasta water while stirring vigorously on low heat. I’m serious. The sauce is already salty and flavorful enough that you can skimp here and use legit just water. Obviously, season to taste (though not much salt will be needed). 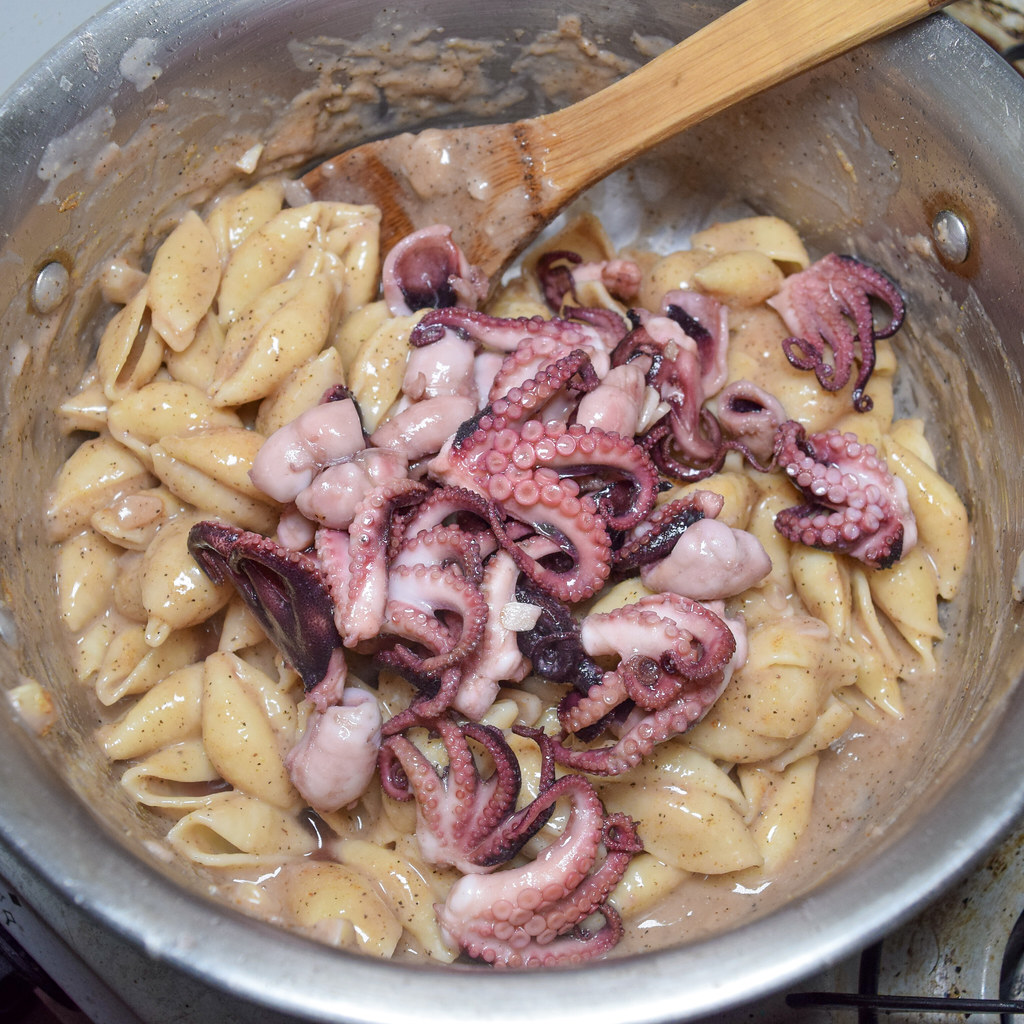 Once saucy enough, throw in the pasta shells and mix thoroughly. Try to wait until the end to add the octopus to avoid over-cooking or breaking apart. 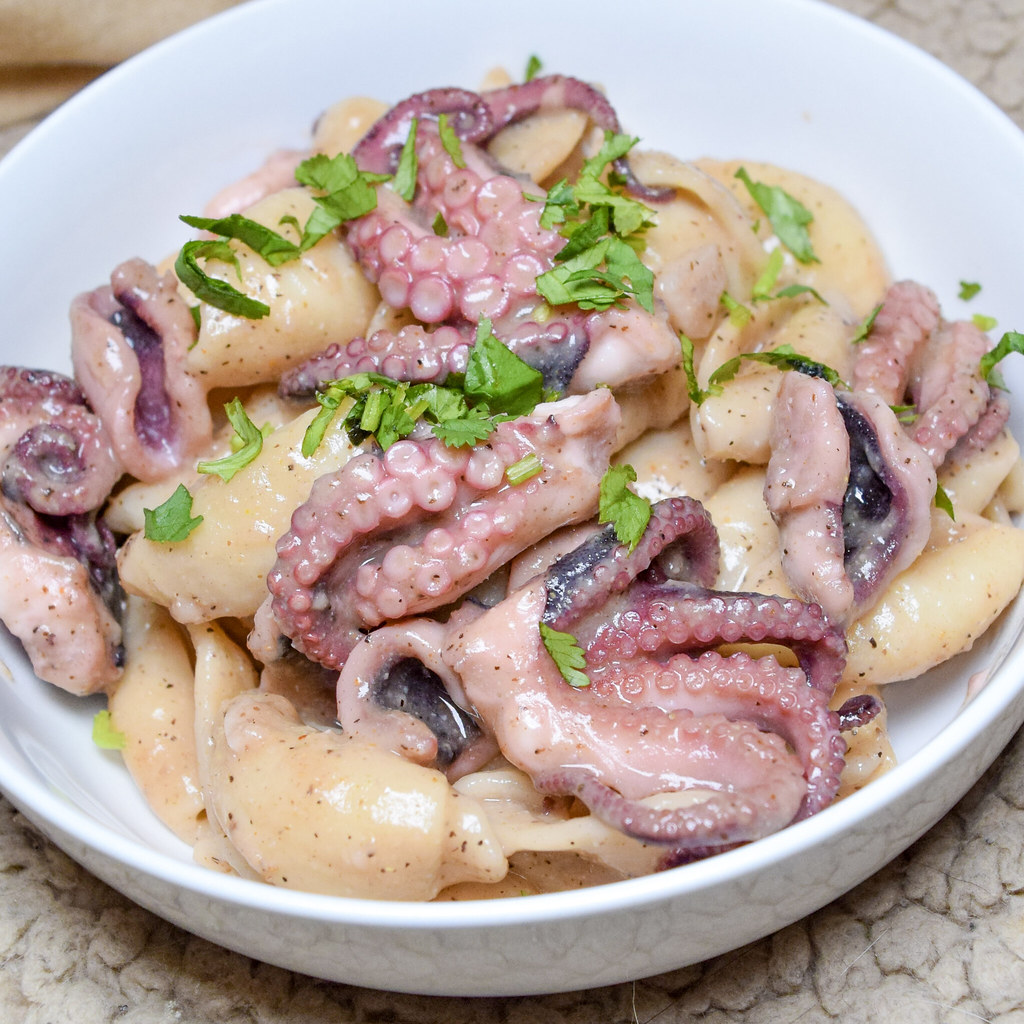 Serve with an excessive amount of octopus piece on top to freak out all your Instagram followers. Say you killed each baby octopus yourself with your bare hands. It’ll be worth it, trust me.

I also made a similar dish, but with only just sauteed baby octopus here: Recipe – squid pasta and grilled baby octopus, if you’d like to try a pasta-less version of this dish.