Finding local breweries is always a priority on our itineraries while traveling. After a few people recommended Urban Village Brewering Co. in Philly, I was immediately sold – They brew their own craft beers AND have an in-house brick oven for pizzas! 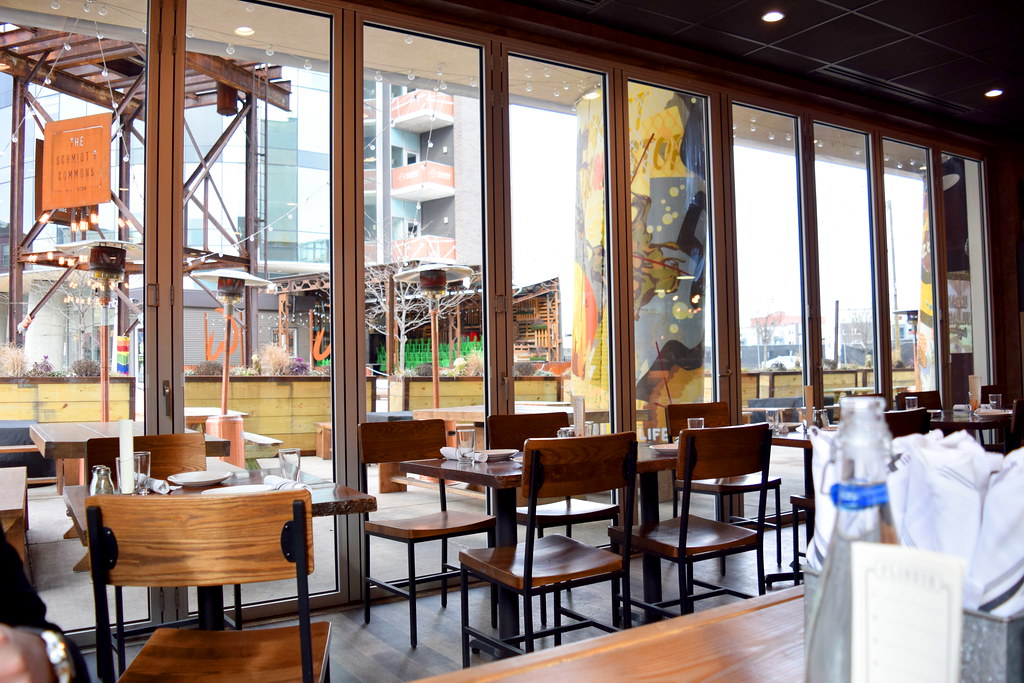 It was unfortunately too cold to sit outside when we went (the window-lined walls retract when it’s warmer), but we loved the openness of the space. Oh, and perfect for taking photos of food, duh. 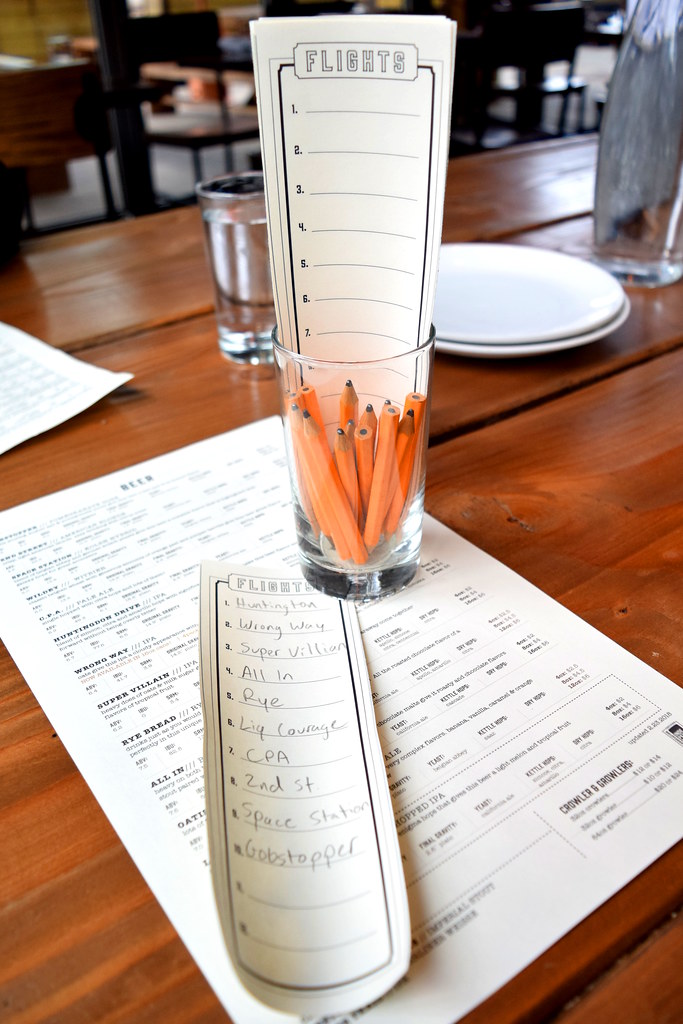 So I mean, how cute is this? In the center of every table is a little cup with these adorable golf club pencils to write down your ideal beer flight. They had quite an extensive list of beers to choose from, and since both myself and my boyfriend are almost always indecisive, we went for a majority of them. 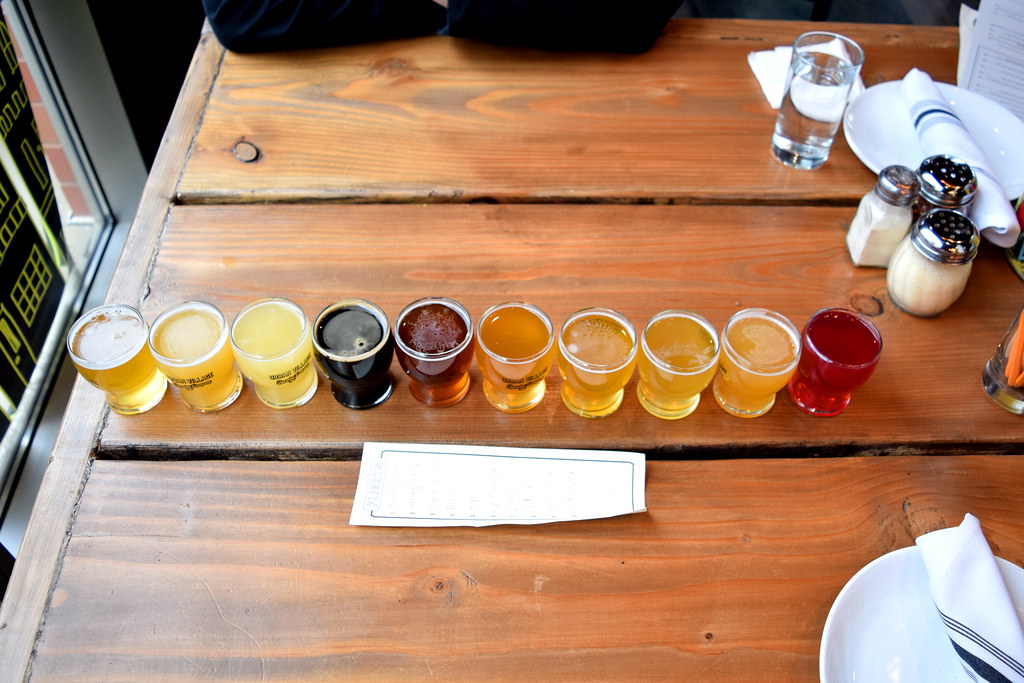 They actually fill it in the order you wrote your list. Which is why I was a smidge pissed off my boyfriend didn’t write them in order from lightest to darkest. Would have been a pretty cool photo if you ask me.. 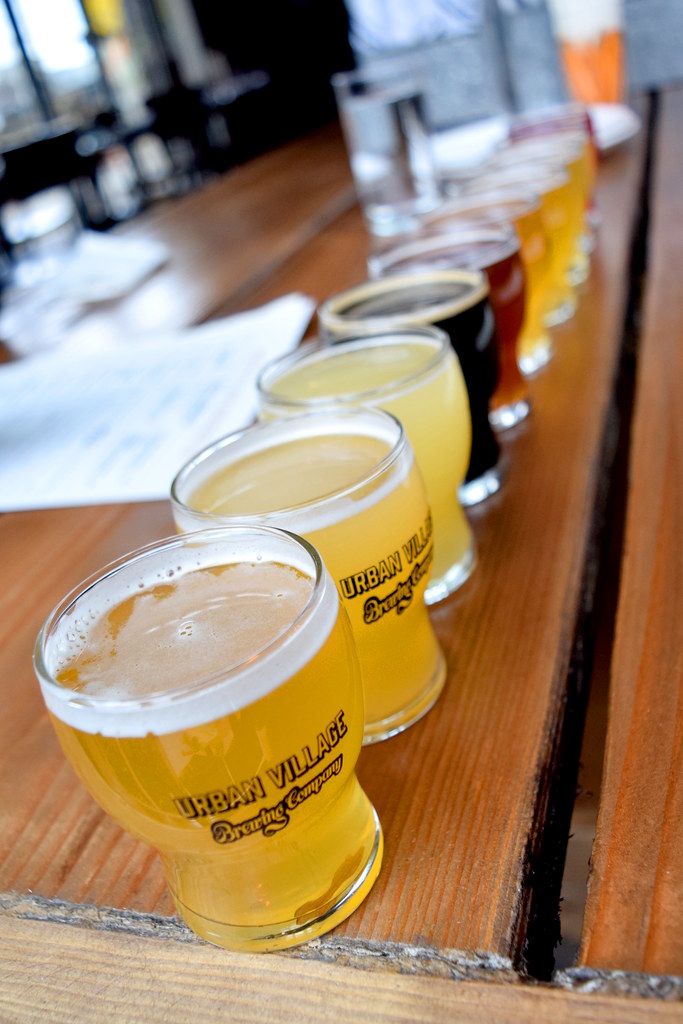 But now on to the most important part – the beer tasting! 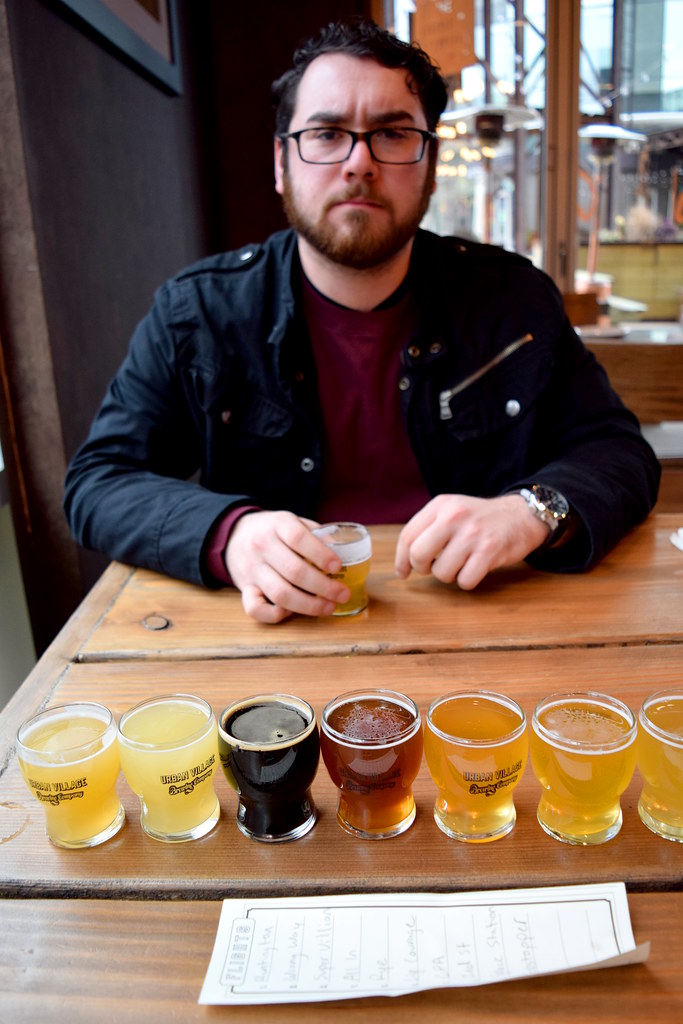 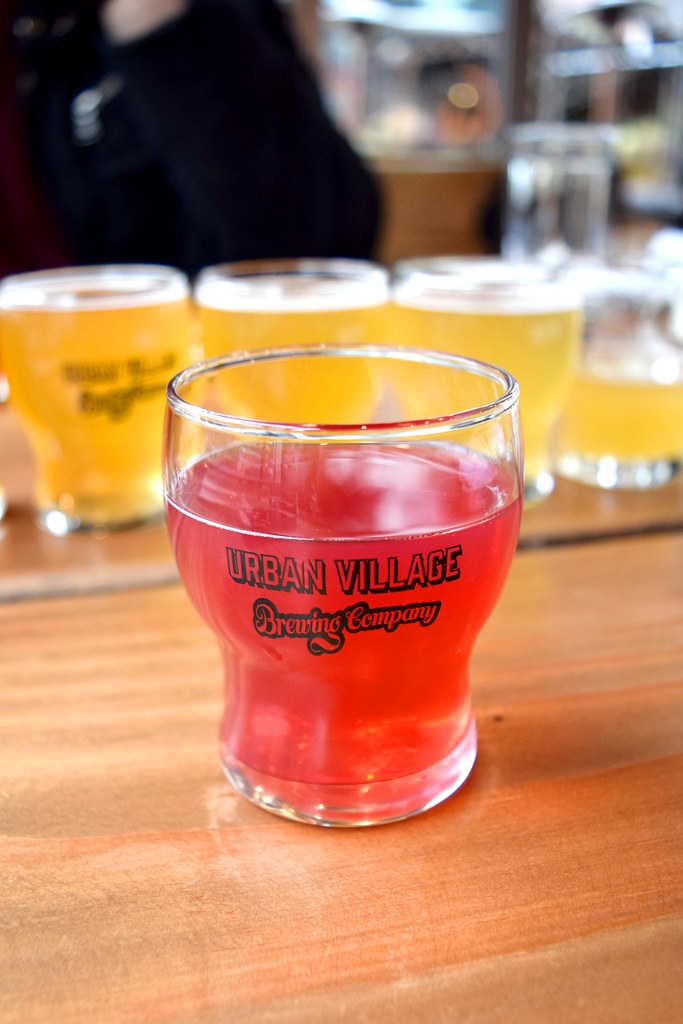 I think we were both surprised with the fact that each of our favorite beers were not necessarily the types of beers we usually order. Yup, that bright pink one was his favorite (Gobstopper). 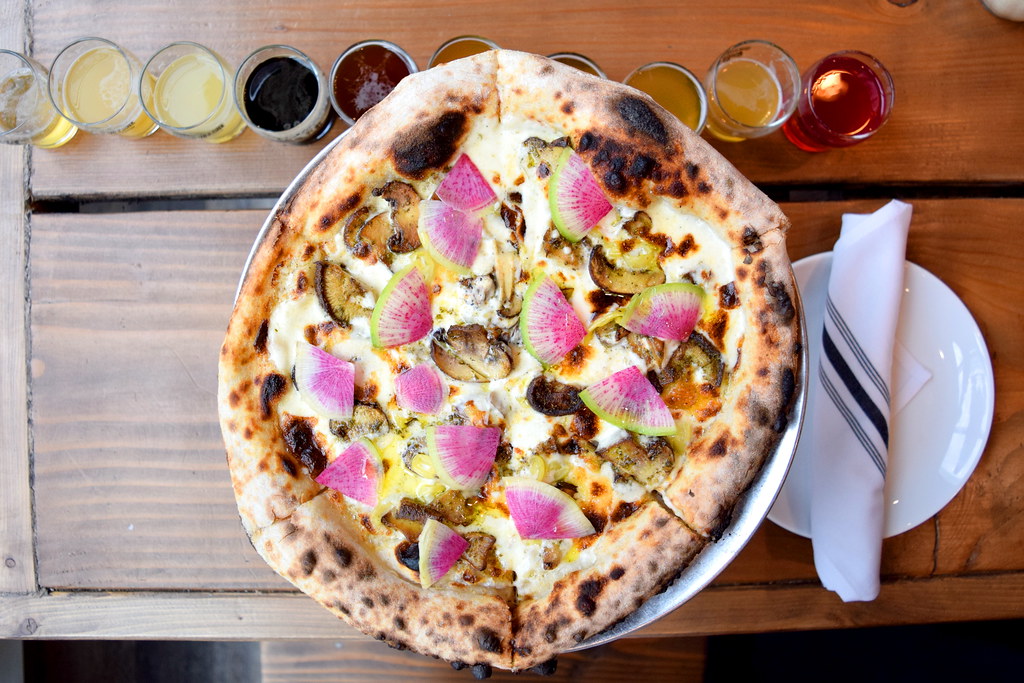 Aside from all the beer tastings – If you think I didn’t order a pizza pie while I was here, you must not know me at all. Of course I fucking did. And before I get into details of this delectable pizza, just note how it’s heightened over the table. They ingeniously use old large tomato cans as a pizza holder – adorbz! 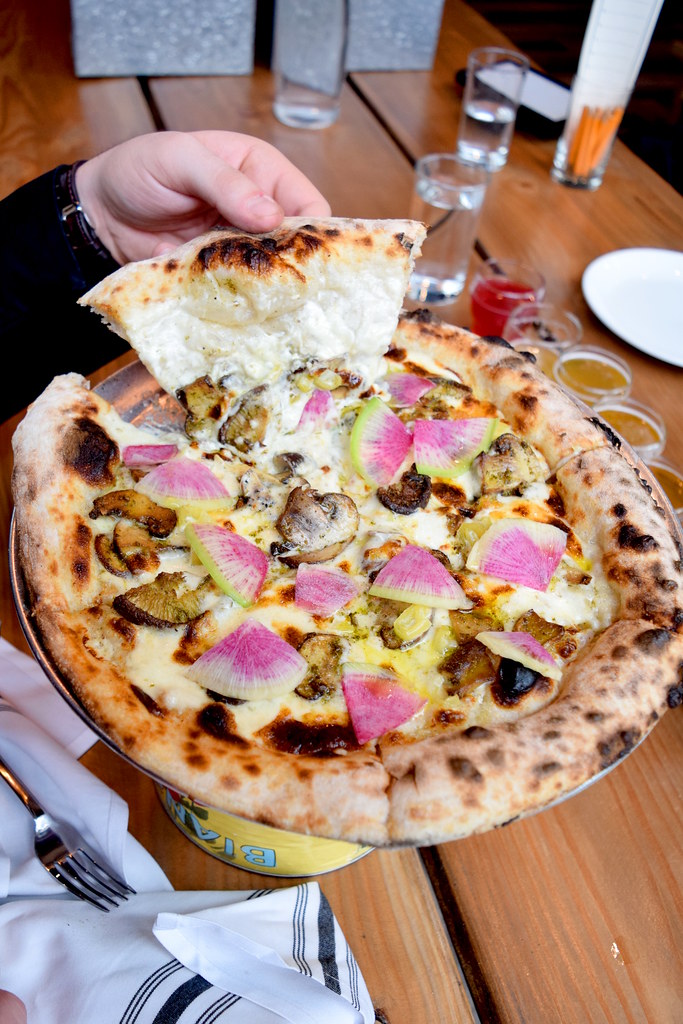 This is the “Tara” pizza, and it came with truffle cream, kennet mushrooms, pickled banana peppers, mozzarella, and pecorino cheese. I honestly knew I was gonna order this once I read the word “truffle cream”, but I had no idea it would look this gorg! 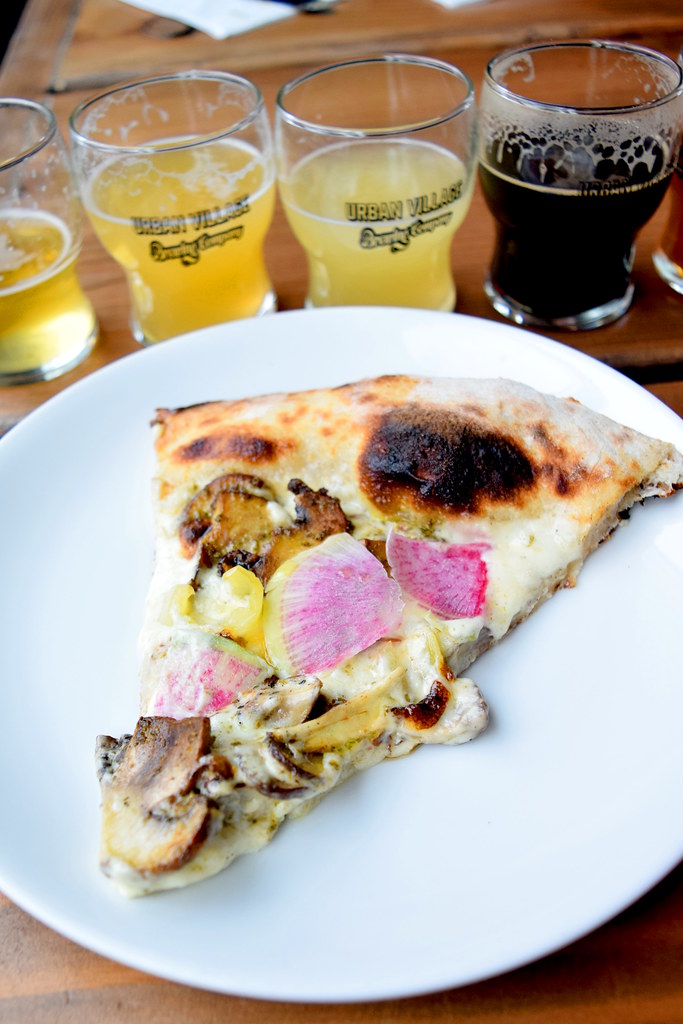 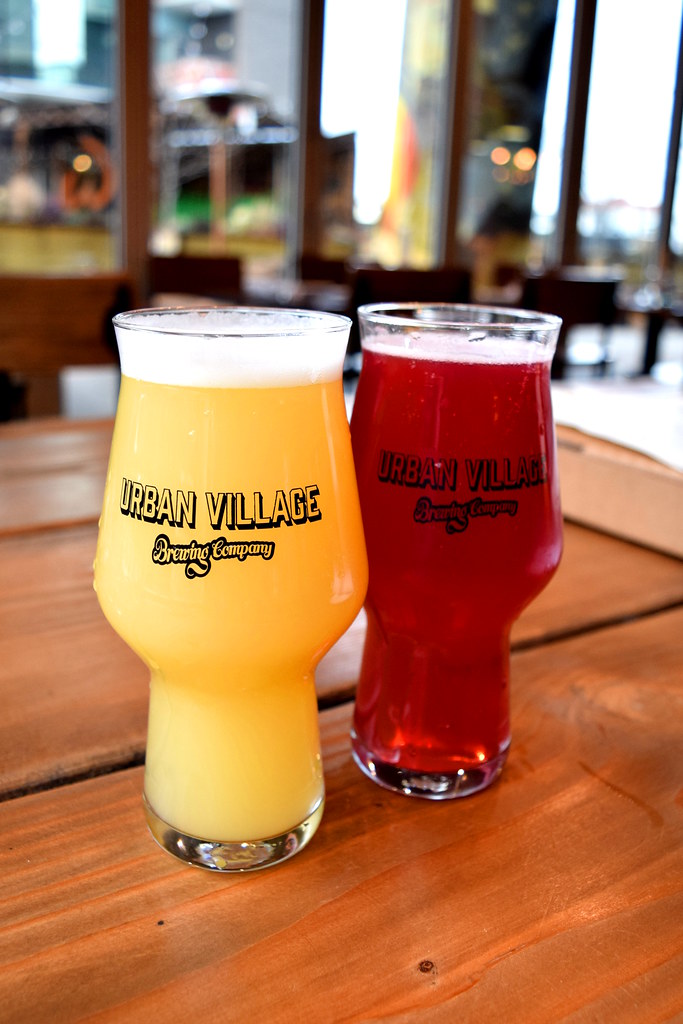 Trust me, it tasted just as beautiful as it looked. The truffle scent was delightful, but not overwhelming. The meatiness of the mushrooms made you forget you were eating a vegetarian pizza. But really, the way the brick oven crust’s texture mixed with the creamy cheese on top, like, that was heavenly. Oh, and also featured were our two fave beers – mine: Super Villain, his: Gobstopper. 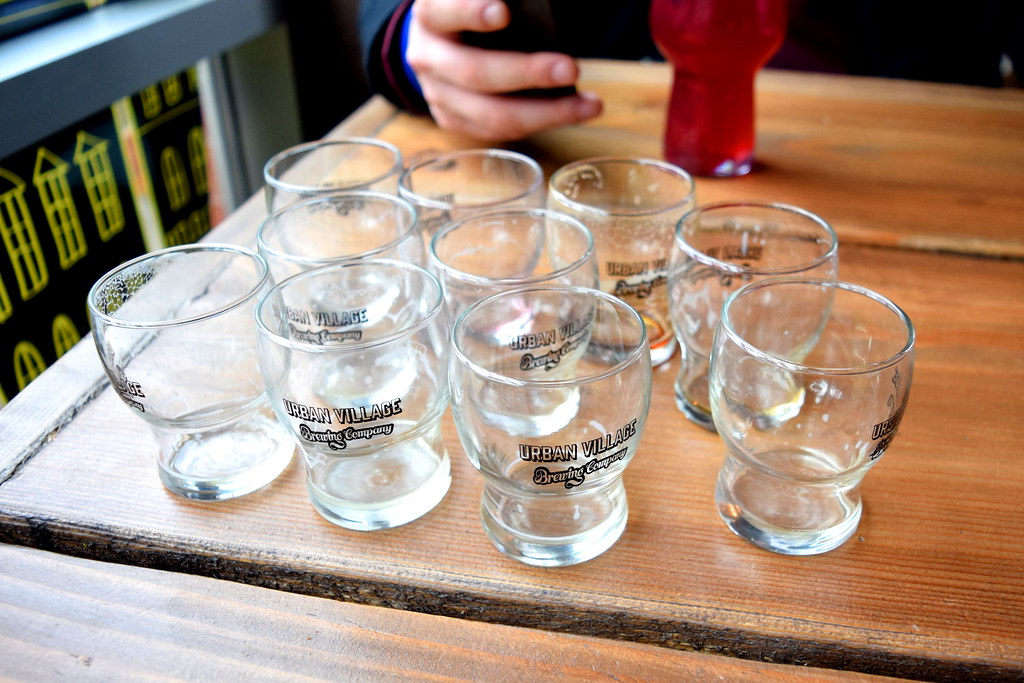 Yeah, we finished those flights at top speed. 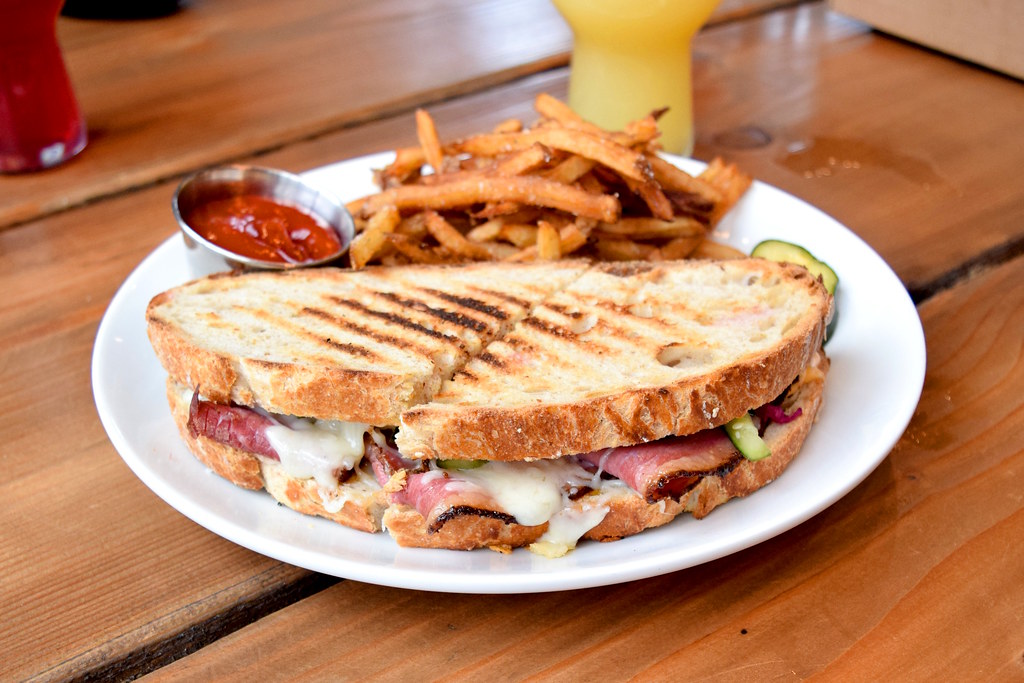 Because we weren’t enough of fat asses, we ordered this beautiful Pastrami Grilled Cheese. (Unfortunately it looks like this is no longer on the menu! 😦 But I’m positive they have other just as amazing sandwiches). 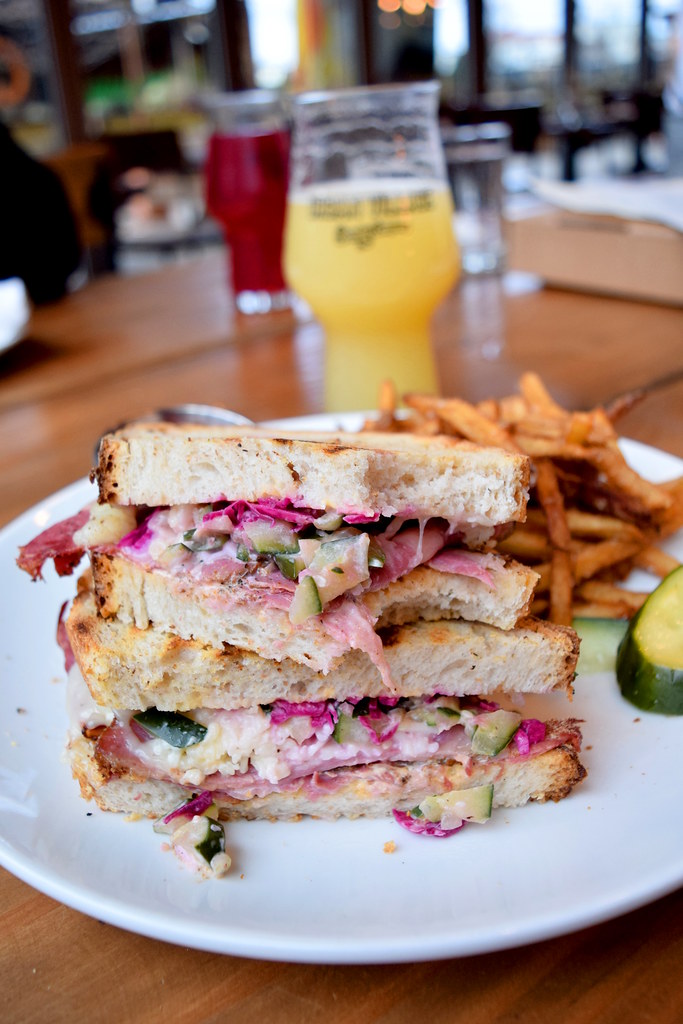 This bad boy was stuffed with house-smoked pastrami, fontina cheese, spicy pickle relish, and “special” sauce. Came with a side of fries and what seemed like housemade pickles. Amazing way to end our day around Philly.