I’ve done my fair share of food tours around the globe, but surprisingly never did one in my food-centric home city of NYC. A deal through IfOnly prompted my purchase for 2 tickets for a food and walking tour of the Lower East Side from ABC Food Tours.

Our guide (and owner of the company!), Matt, met us at Tompkins Square Park. Luckily the weather was not ideal so the only people on this particular tour was myself and my boyfriend. It turned out to be great because we really got a personalized experience with Matt. 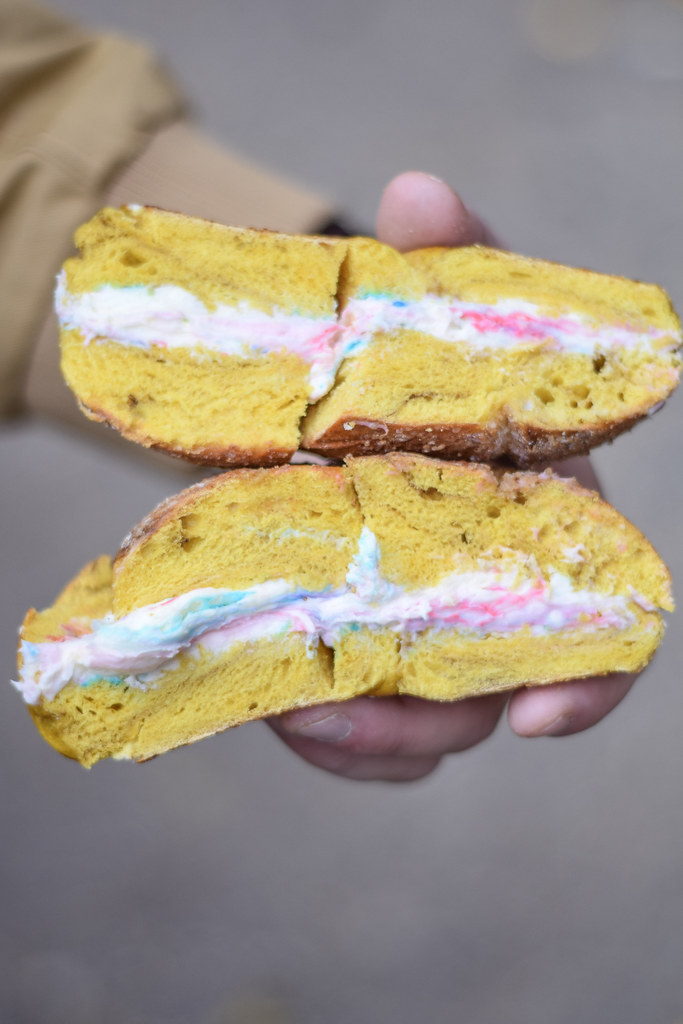 He first took us to Tompkins Square Bagel, right off the west side of the park. We were able to bypass the long line of customers and grab our bagel to enjoy outside. The bagel texture was chewy and airy, just how a New York bagel should be. 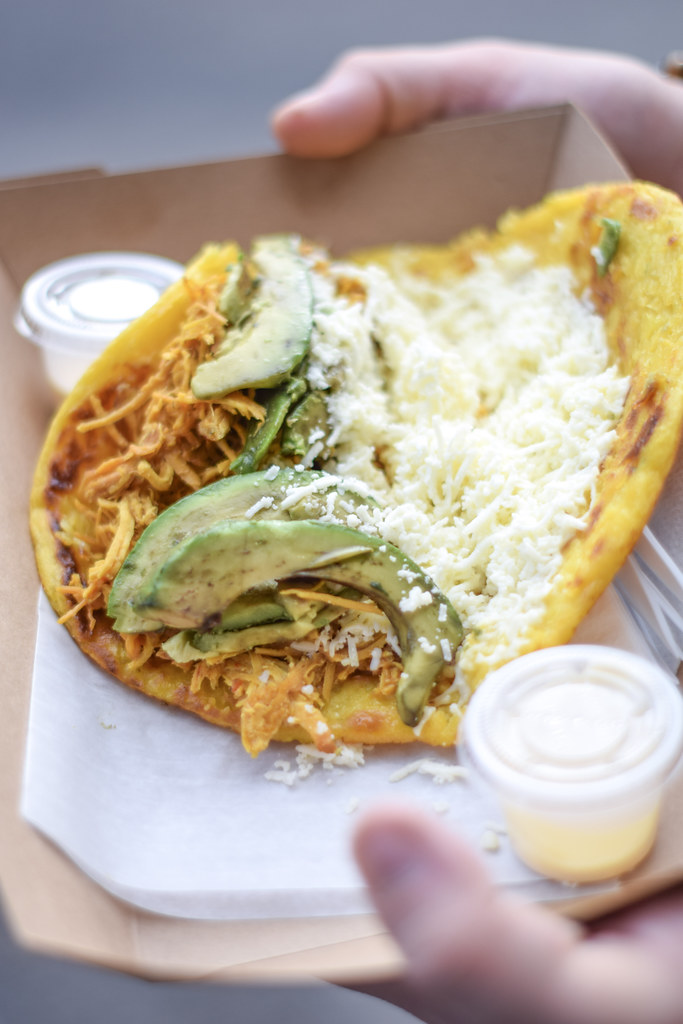 While walking to our next location, Matt explained how he got into this business – to help the underprivileged youth in the neighborhood. The money made by the tours, which in turn also helps the local community, is used to bring kids to eat at restaurants they likely would not have otherwise.

This is something I never even thought about. The statistics were astounding – 50% of students at P.S. 188 (a nearby elementary school) are homeless, and 69% of public school students in the LES live in poverty. Programs like ABC Food Tours allow the funding for these children to experience new things in life. 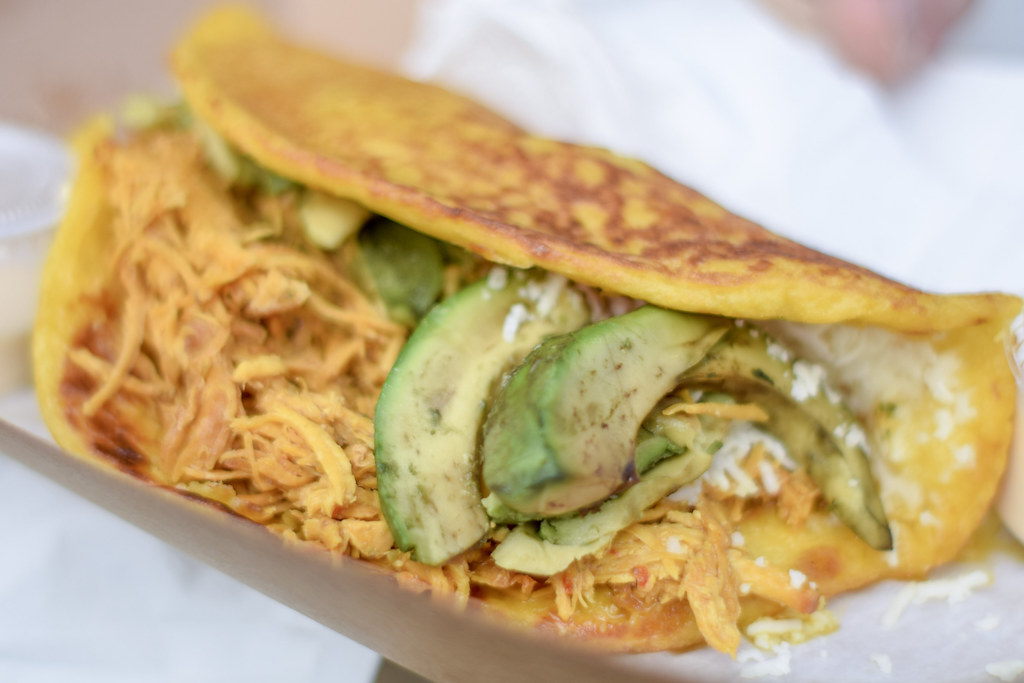 Getting back to the food tour itself – I was happy to find that he took us to a casual arepas restaurant called Arepa Factory. These corn cakes (essentially tacos but texturally different) come stuffed with a multitude of ingredients of your choice. We had some type of pulled chicken, avocado, and cheese. 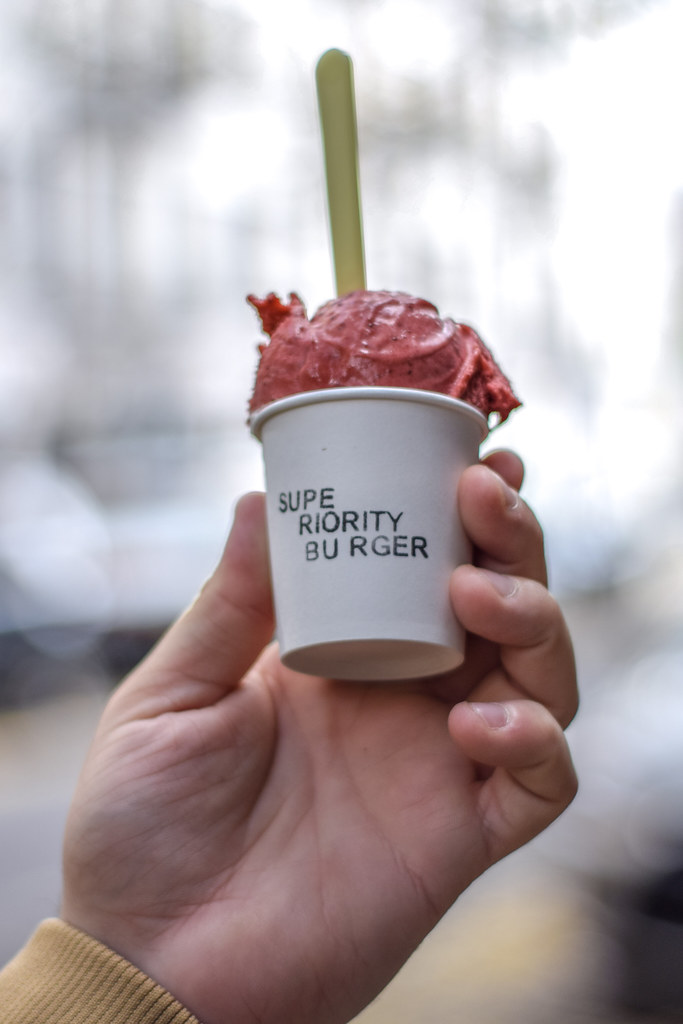 Then we made our way down to Superiority Burger, which contrary to its name, is a well-known vegetarian/vegan spot. We had 2 scoops of gelato – the top was fruit jam, and the bottom was surprisingly flavored into tortilla! Honestly, the tortilla gelato was out of this world; literally tasted like tortilla flavored gelato. 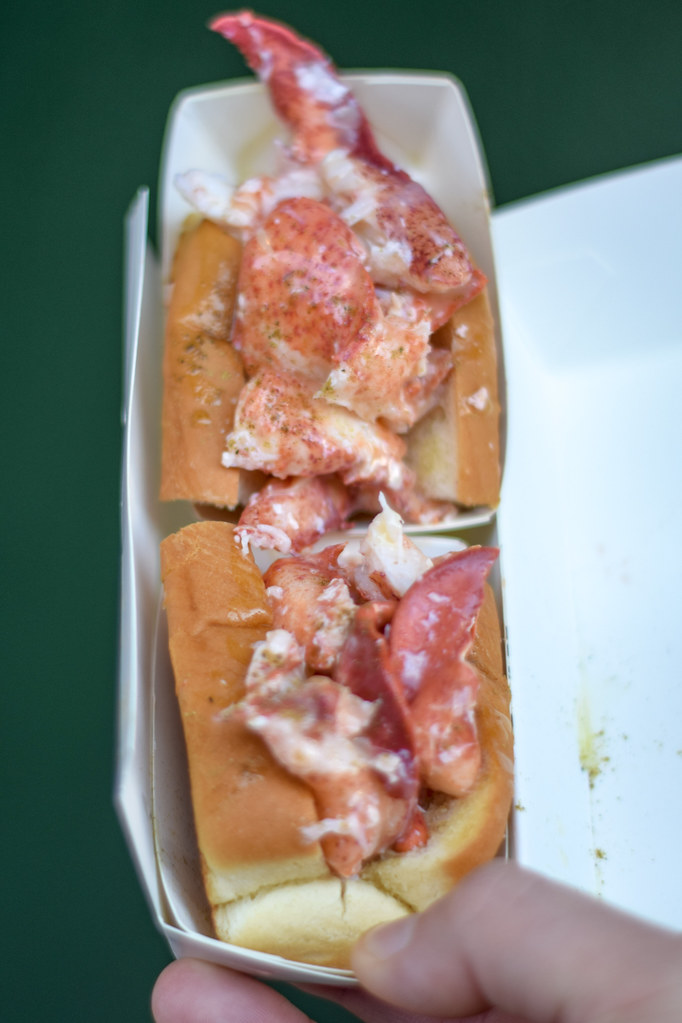 Luke’s Lobster is a chain I’ve frequented many times in the past few years, so I was happy to see such a large company participating in Matt’s project for ABC Food Tours. As expected, the buttered lobster roll was amazing. 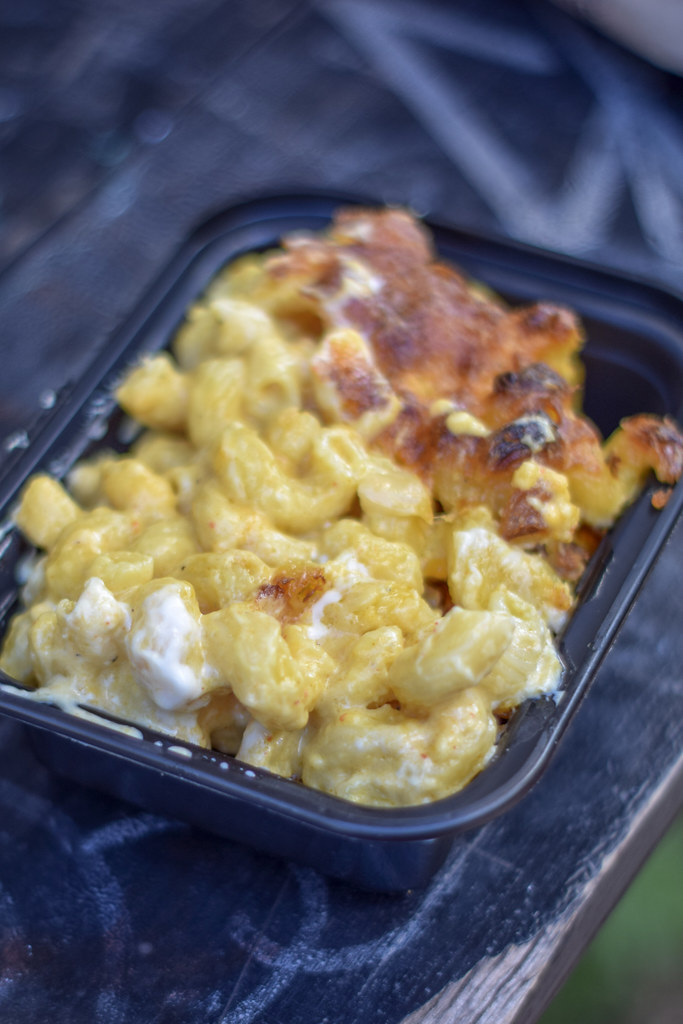 As if we didn’t eat enough food by this point, Matt took us to Bobwhite’s. They’re well-known for their fried chicken and soul food, which could be seen from the impressively long line of customers waiting to order when we arrived. Of course, we got to bypass the lines and enjoy this creamy mac and cheese perched outside. 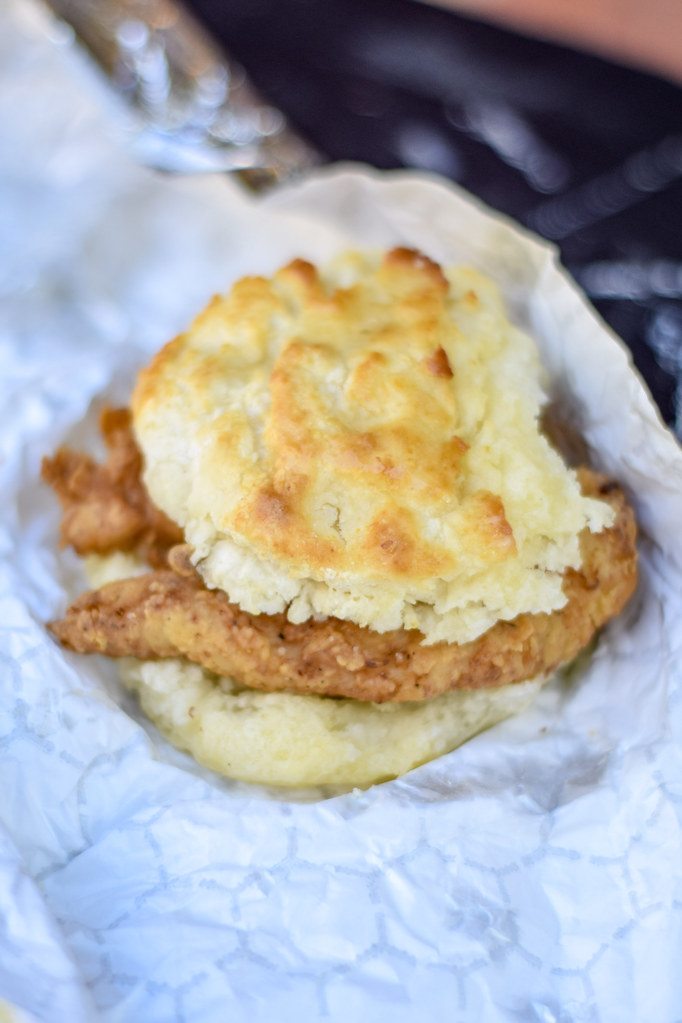 In addition to the mac and cheese, we got the classic friend chicken sandwich on a biscuit. The biscuit dough was so flaky and rustic you could tell it’s homemade, and the chicken’s crispiness was crunchy but not heavy. 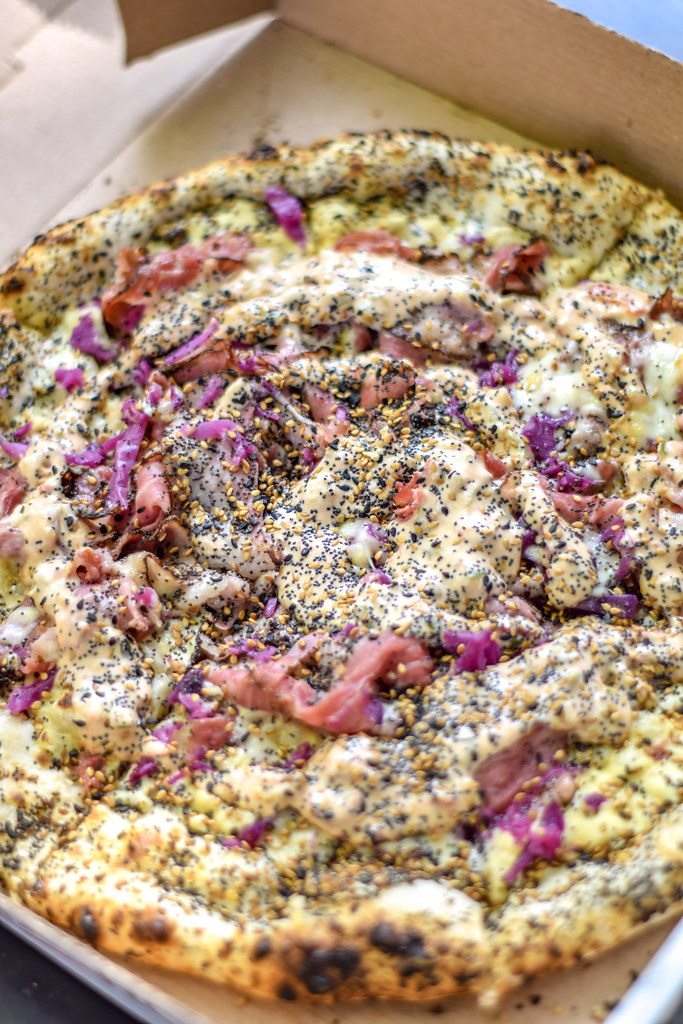 Last but not the least, we headed to the Brooklyn-famous, now an LES classic – Speedy Romeo. This pizza called the “Paul’s Boutique” was topped with Katz’s pastrami, dijon bèchamel, smoked red kraut and fontina cheese onto an everything bagel crust and smothered with 1000 island dressing. Yes, it is extremely excessive and overly indulgent, but is it worth it even for a slice? Absolutely.

While taking our final bites into our pizza before asking the server for a to-go box, Matt said his farewells and we thanked him for an amazing day. It was more than just a food tour, or even a walking tour; it was about the community itself and that’s what he strives to focus on.

I highly recommend if anyone wants an authentic downtown food or walking tour to check out ABC Food Tours. You’ll not only get amazing food from an array of establishments (and lots of food at that), but you’ll be benefiting the local community in more ways than you know.